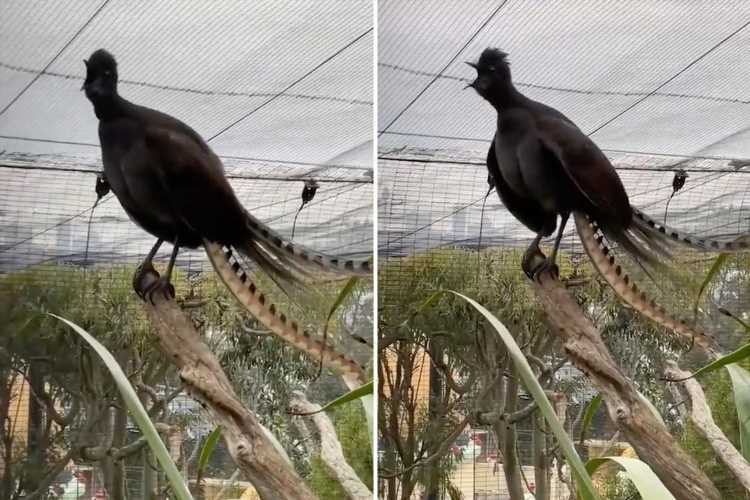 AN UNNERVING video of a bird mimicking the cry of a human baby has been revealed by an Australian Zoo.

The creature is called a 'superb lyrebird', an animal known for its ability to accurately mimic the sounds of its surroundings.

It captioned it: "Bet you weren't expecting this wake-up call!

"You're not hearing things, our resident lyrebird Echo has the AMAZING ability to replicate a variety of calls – including a baby's cry!"

According to The Guardian, Echo first started crying like a human baby a year ago.

Taronga's unit supervisor of birds, Leanne Golebiowski, told the publication: "I can only assume that he picked it up from our guests. Obviously he has been working on his craft during lockdown.

"There are two other sounds that he makes at the moment which he has newly learned.

"One is the sound of a power drill which is scarily accurate – the second is our fire alarm. He even has the 'evacuate now' announcement down pat."

Despite its amazing singing abilites, the vocal organ of the songbird is said to be pretty simple compared to other birds.

It only has three pairs of muscles in its syrinx, the vocal organ in birds, instead of four.

The birds sing year round but males sing more in the winter breeding season.

This suggests the singing is associated with finding a suitable mate.

Some of the females mimic the sounds of predators and could use their vocal abilities for defence.

Find out more about science

Want to know more about the weird and wonderful world of science? From the Moon to the human body, we have you covered…

In other news, Twitter is having to make changes to the recent redesign of its app after users complained that it caused headaches and migraines.

Facebook is working on a way to analyse encrypted messages without fully reading what they say, according to a new report.

Sexting warnings will be sent to parents of children who have an iPhone or iPad that is sending or receiving explicit images.

And, the next iPhone will come in a new pink colour and start at just under £800, according to recent rumours.