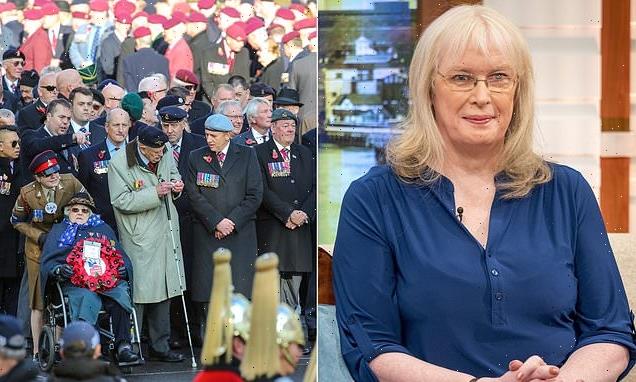 LGBT+ veterans will attend Remembrance service for the first time

The first transgender officer to serve in Britain’s Armed forces said it will be a ‘proud moment’ when LGBTQ+ veterans officially attend the National Service of Remembrance for the first time.

Caroline Paige, who served in the Royal Air Force for 35 years as a navigator on fast jets and battlefield helicopters, will be one of 21 LGBTQ+ veterans marching at the Cenotaph in central London on Sunday.

Ms Paige said it will be ’emotional’ to see LGBTQ+ veterans attending at the Armistice Day service for the first time and being part of the ‘military family’. 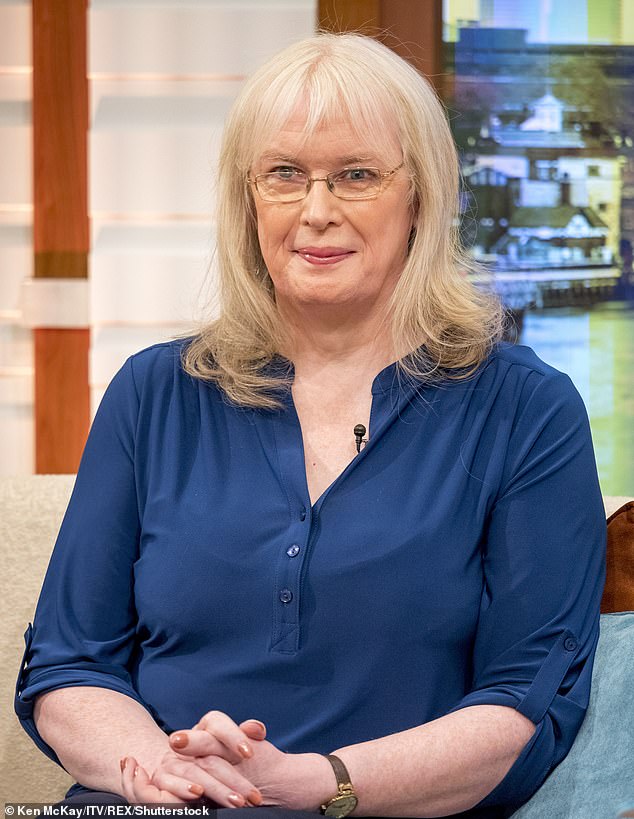 Caroline Paige, who served in Royal Air Force for 35 years, will be one of 21 LGBTQ+ veterans marching at the National Service of Remembrance at the Cenotaph in London on Sunday

‘It will be fantastic to see all the veterans together marching for the first time, bearing in mind that many of them were dismissed from the service, and it’s just so nice to see them as part of the military family.

Ms Paige is the joint chief executive of the charity Fighting With Pride, which supports the health and wellbeing of LGBTQ+ veterans and has been given more than 20 places at Sunday’s event.

Ms Paige said the charity was formed last year to bring together LGBTQ+ service personnel who were dismissed before the so-called ‘gay ban’ in the UK armed forces was lifted in 2000.

The charity aims to show LGBTQ+ veteran that ‘times have changed and their service is respected and support is out there’.

‘It’s shocking that nothing had been done previously,’ she said.

Of the 21 LGBTQ+ veterans who are marching as part of the charity’s contingent on Sunday, 16 were dismissed from service.

Chris Ferguson, who was a medic and radiographer in the Royal Navy medical branch before being dismissed in 1982 for being gay, will be marching with his fellow LGBTQ+ veterans. 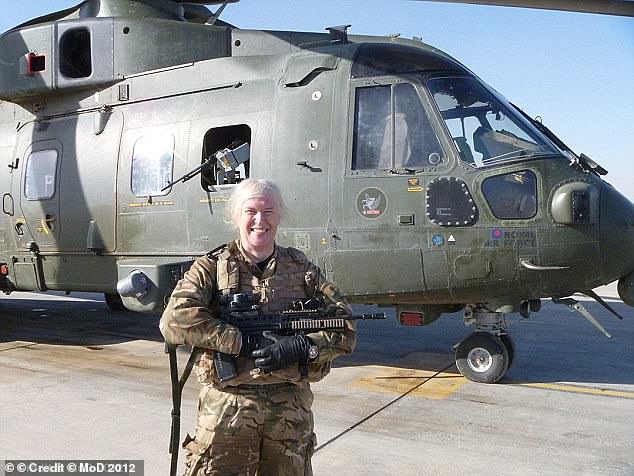 Speaking about her experience in the armed forces, Ms Paige (pictured) said had to ‘hide’ who she was for 18 years in service before she decided that she ‘needed to be true to myself’ 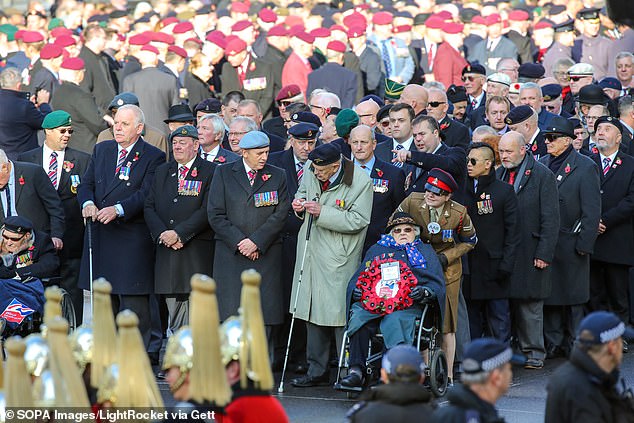 Ms Paige said it will be ’emotional’ to see LGBTQ+ veterans at the Armistice Day service for the first time. Pictured: War veterans at the annual memorial service at the Cenotaph in 2019

He said it will ‘profoundly moving’ to be able to march at the National Service of Remembrance, as he never thought he would be able to do so.

He continued: ‘To march to remember the fallen is an honour I thought I would never be able to perform.

‘For all service personnel, present and former, it is remembering our own family. The forces are one family, no matter in which generation we served.

‘To be able finally to remember our family properly, as the equal of other veterans, is a profoundly moving experience for me.’

Another veteran who will be attending is Lieutenant Commander Duncan Lustig-Prean, who was among those who led the campaign to have the so-called ‘gay ban’ overturned.

Speaking about the march, he said: ‘It is 25 years since LGBTQ+ service personnel last marched, under condition of anonymity, together at the Cenotaph.

‘It is our duty to honour all those who gave their lives for freedom and… we do that with pride.’

Lt Cdr Lustig-Prean was discharged from the Royal Navy in 1995 and was a prominent test case at the European Court of Human Rights.

Taking to Twitter on Saturday, Fighting With Pride wrote: ‘Tomorrow will be a proud and poignant occasion for us all, as we march to the Cenotaph in a solemn act of remembrance to honour the fallen.

‘We will remember them.’

Speaking about her experience serving in the armed forces, Ms Paige said had to ‘hide’ who she was for 18 years in service before she decided that she ‘needed to be true to myself’.

In 1999, the flight lieutenant became the first openly-serving transgender officer in the Armed Forces – a year before the ‘gay ban’ ended. 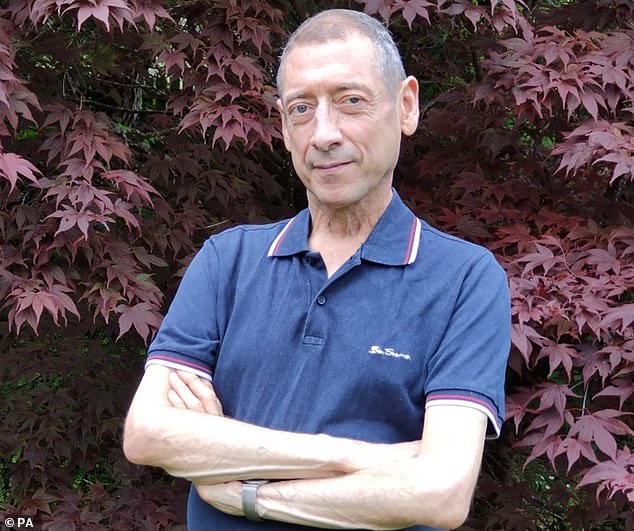 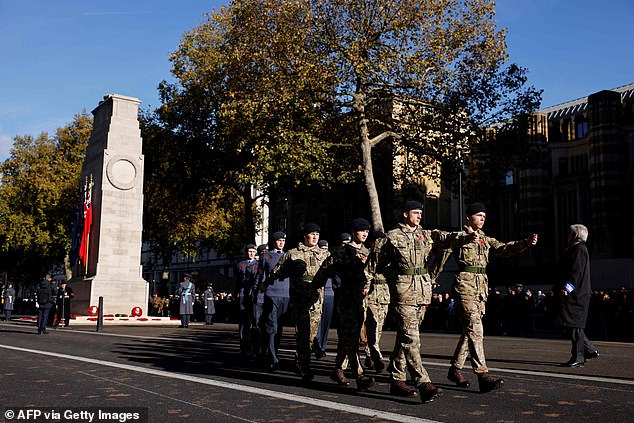 Of the 21 LGBTQ+ veterans who are marching at the service on Sunday, 16 were dismissed from service. Pictured: Cadets march at The Cenotaph on November 11, 2021

She said she was ‘lucky’ not to be dismissed, as less fortunate LGBTQ+ personnel were imprisoned, stripped of their medals or forced to resign.

But Ms Paige said she faced hostility from many people, who asked for her to be thrown out and told her she didn’t ‘belong’ and she was a ‘liability’.

But she overcame the obstacles and served for another 16 years, becoming a tactics specialist and receiving multiple commendations for exceptional service in Iraq and Afghanistan.

She flew air defence fighters during the Cold War, was deployed in the Gulf War and switched to helicopters in Bosnia and Northern Ireland.

Ms Paige said: ‘It took a while for people to eventually realise that I could do my job well.

‘Slowly, I saw the military go from a really hostile place to a period where it was quite difficult for three, four years or more, and then it got better until obviously now it’s really inclusive’.

Craig Jones MBE, Fighting With Pride’s other joint chief executive who was a lieutenant commander in the Royal Navy, said: ‘It’s with immense pride that we will see LGBT+ veterans remember the service and sacrifice of members of our Armed Forces who gave their lives for our peace and freedom at the National Cenotaph.

‘Standing alongside fellow veterans means a great deal to our community and being able to play a role in the day is a great honour for us all.’

It comes as the Ministry of Defence has promised to return medals to all veterans who had them stripped because of their sexual orientation or gender identity in time for Sunday.