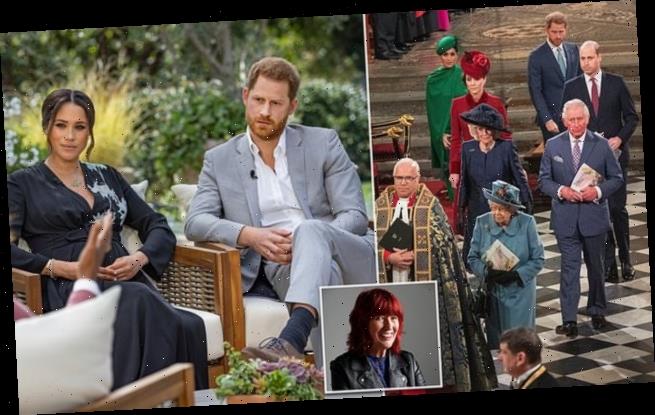 JANET STREET-PORTER: I don't believe being bossy makes you a bully

JANET STREET-PORTER: I’m not a huge fan of Meghan, the Duchess of Woke but I don’t believe being bossy makes you a bully, just demanding

Posh people always say that ‘having staff’ takes some getting used to.

Apparently, it’s all to do with breeding and knowing exactly where to draw the line. Employers must not be too imperious but should steer clear of being over-familiar.

Absolute tosh, of course. Having met several Royal butlers, my worry would be the huge secrets they keep, the ghastly goings-on they must have witnessed in those badly decorated drawing rooms at Buckingham Palace, Kensington Palace and Windsor.

Should a royal salary (it’s not generous) buy silence? It didn’t in the case of Paul Burrell.

Now, Meghan Markle stands accused of hounding a series of PAs out of their jobs, of seeking to undermine her staff and of making impossible demands which led to tears and ‘stress’ among those who remained.

Before meeting Prince Harry, Meghan was probably more accustomed to airing her (very) forthright views on everything from women’s rights to racial discrimination to her fellow crew members on movie sets, sundry yoga teachers, nutritionists, and wellness coaches.

Even a cursory glance at her CV confirms that this woman has an opinion about everything and doesn’t mince her words. 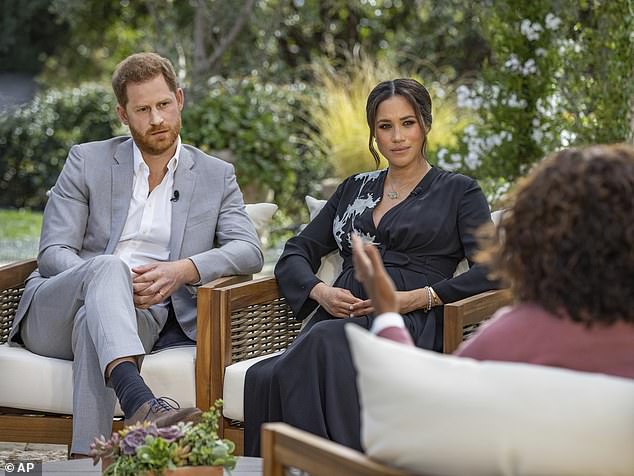 The accusations of bullying have been simmering for months, but how very convenient they should finally surface in all their whimpering pettiness, just as the Duchess is finally about to conduct a major interview (pictured) about her experiences as part of the dysfunctional Royal ‘Firm’? writes  JANET STREET-PORTER

Which probably didn’t prepare her for the horribly arcane levels of snobbery which form the basis of worker-boss, or in this case lackey-‘Principal’ (as top Royals dub themselves), relations in the Royal Household.

Meghan has my sympathy. As an actress in an upmarket soap, where are you going to learn how to curtsey, keep a straight face while receiving tea in bone china from men wearing frock coats and tights and how to be careful not to say anything of note while a lackey is standing silently in the corner of the room?

Meghan might have been the newbie at the Palace but she was entitled to loyalty from her team – and as this week’s Bullygate scandal reveals, that’s hard to come by, even when the whingers concerned willingly signed a non-disclosure agreement (NDA) when they went to work for her.

It’s no surprise that Meghan managed to ruffle feathers and cause upset amongst the staff when she moved in with Harry – a troubled young man who had already been allowed to get his own way for years, struggling to cope after the death of his mother, supported from a distance by a stuffy father.

Now, Meghan – having outraged the Firm by daring to turn her back on the UK – stands accused of bullying, of forcing weeping staff from their jobs, of making outrageous demands and – the biggest crime of all – of having a husband who took her side.

She’s thousands of miles away on the other side of the Atlantic, but former staff still seem to need to belittle her anonymously.

The accusations of bullying have been simmering for months, but how very convenient they should finally surface in all their whimpering pettiness, just as the Duchess is finally about to conduct a major interview about her experiences as part of the dysfunctional Royal ‘Firm’?

An interview, that I would say, she is perfectly entitled to do, to set out her side of a story about which so many other people have never held back from having an opinion. 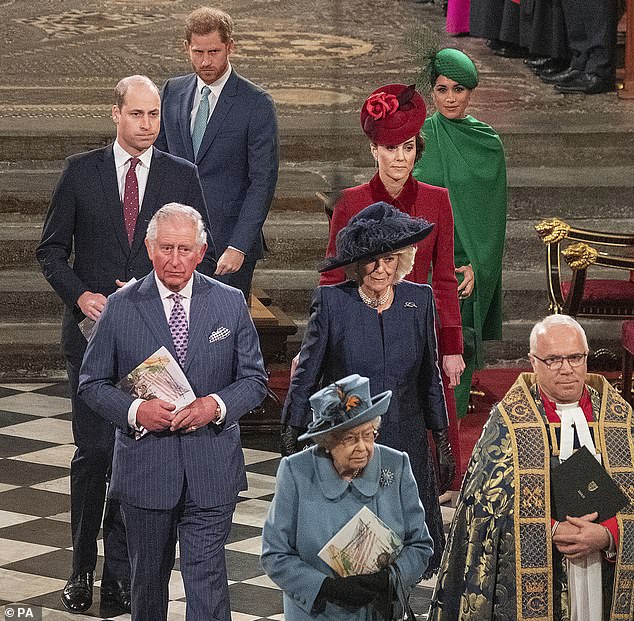 It’s no surprise that Meghan managed to ruffle feathers and cause upset amongst the staff when she moved in with Harry – a troubled young man who had already been allowed to get his own way for years, struggling to cope after the death of his mother, supported from a distance by a stuffy father, writes JANET STREET-PORTER. Pictured: The Royal family at the 2020 Commonwealth Service at Westminster Abbey

I don’t doubt that Meghan has experienced bullying herself, coming from a mixed-race marriage which ended in divorce. No matter how loving her parents might have been, she will have had to make a series of choices to get on at school, to land a part in a successful TV series.

I am sure that along the way she will have had to exercise ruthless charm and total determination and ambition. On her marriage, was she supposed to negate the very qualities that earned her pots of money and made her a success, and morph into pliant wife and docile Kate Middleton-clone in the Royal Household?

We cannot imagine how suffocating and labyrinthine the Palace way of conducting any business must have seemed – even more so to a mixed-race outsider who had made a huge success of her life.

Having experienced similar situations at work including bare faced snobbery (in my case because I was working class) and hypocrisy from those paid to carry out your wishes (but who drag their heels, because they favour the existing establishment), the Duchess of Sussex has my total support.

I disagree with Piers Morgan who called for the couple to remove their ‘hypocritical halos’. The person who seems to have fallen short and who should be explaining themselves is the Palace’s head of HR – Samantha Carruthers – who, when told of the bullying allegations in an email from one of the Sussex’ staff, seems to have done little about it.

It appears that she neither asked to talk to Meghan or conducted any kind of investigation to determine whether further action was required, even if it was just a polite and tactful word in someone’s ear about ‘tone’.

Meghan not only had to deal with antediluvian Royal etiquette, but she was also planning a wedding which would be a global event, under intense scrutiny on all sides.

I’m not a huge fan of the Duke and Duchess of Woke, with all their preachy messaging and bucketloads of compassion and concern about the world’s problems (whilst comfy in their multi-million dollar home in gorgeous Santa Barbara), but there’s something suspect about the timing of the Bullygate whingeing. Why didn’t these allegedly badly treated women come forward before?

Instead, they allowed speculation and rumour to run rife for many months, during which time the Duchess could not answer back or state her case because she was still a working member of the Royal Family. Now, that will be rectified with the Oprah Winfrey interview this weekend.

I am sure that Meghan has been demanding, bossy and single-minded about what she wants. But is that really bullying? I have been accused of being a bully because I don’t take no for an answer, because I only want things to be 100% and because I am driven to succeed.

People can be so thin-skinned. They weep if you dare to complain their work is not good enough. They crumble and cringe if you dare suggest you want thing done differently – ie your way. 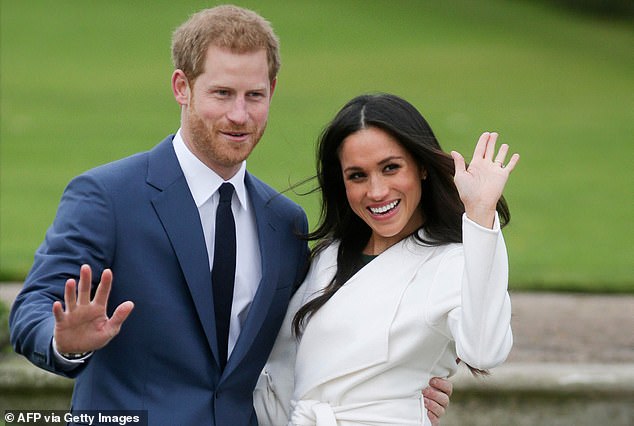 Meghan not only had to deal with antediluvian Royal etiquette, but she was also planning a wedding which would be a global event, under intense scrutiny on all sides, writes JANET STREET-PORTER

And isn’t it funny how women get called bullies, but men are ‘forceful’? The fact that Meghan was an outsider, both in terms of ethnicity, of birthplace, of social experience, growing up in the USA where hard work, not bloodlines, brings huge rewards, can’t have helped.

It’s the same story in politics. God knows enough women have tried and failed to make the UK Home Office bend to their will from Theresa May to Jacqui Smith to Amber Rudd and now Priti Patel. And they have all either been dubbed bullies or ‘ineffectual’. There’s no middle ground.

Just as in the Royal Household, there’s a received way of doing things in government, and any women who claw their way up the greasy pole of power acquire a lot of unattractive adjectives.

Maggie Thatcher was certainly a domineering bully, and Nicola Sturgeon is no shrinking violet.

But is Meghan truly the devil incarnate?

Dubbing her a bully smacks of nastiness, not to mention that classic Upper Class British attribute (for examples look no further than Boris Johnson) … casual racism.