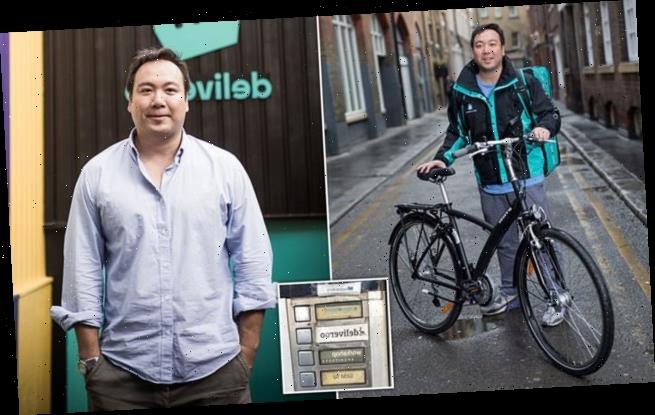 Revealed: Deliveroo founder set to make up to £500m from stock market flotation STILL delivers meals himself, can only cook an omelette and just eats food from his own app as he faces pressure to improve workers’ rights

Deliveroo’s founder may be about to pocket up to £500million from its £7.6billion stock flotation, but shy and single Will Shu is still expected to be out on his bike delivering food for the company tomorrow.

Most entrepreneurs about to take home approaching half a billion pounds would have already have put money down on a mansion or a super car.

But the notoriously private entrepreneur, 41, will probably treat tomorrow like any other, spending the day at his terraced house in Notting Hill, or at his office in the City, eating breakfast, lunch and dinner all ordered through the Deliveroo app.

Mr Shu, a self-confessed geeky American who moved to the UK to work for JP Morgan, founded the company in 2013 after being forced to eat Tesco sandwiches and salads during late shifts working as a banker in Canary Wharf.

The American-born entrepreneur is described by friends as ‘incredibly intense’ and ‘obsessed’ with the business and food.  But despite his wealth and business success, he is believed to have been single for some, if not all, of his time at the helm.

Mr Shu, who says he is a ‘good tipper’ to the riders who bring his three meals a day by bike or car, still works at least once a week on his bike – but despite his frontline experience his business remains dogged by claims it fails to pay and treat its delivery staff properly. 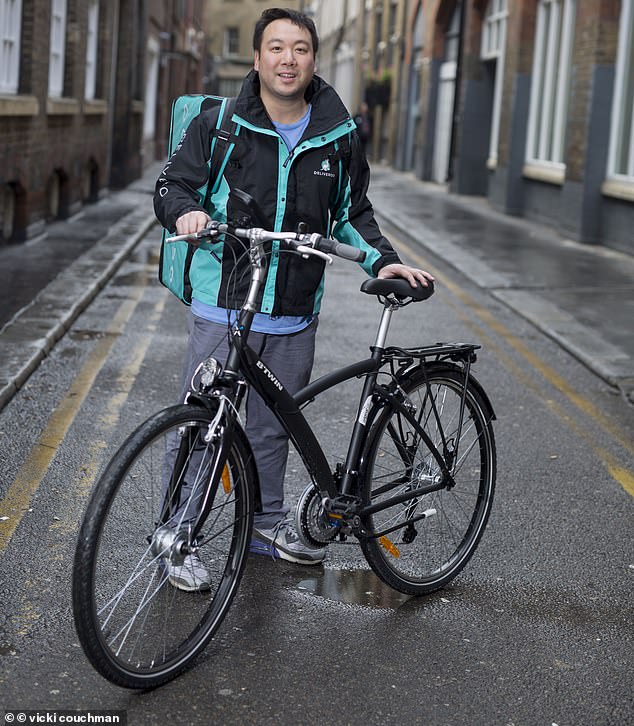 Yesterday, just 48 hours before launching on the London Stock Exchange, Deliveroo’s maximum potential market valuation fell from £8.8billion to £7.9bn over the issue. But there is still huge interest in the firm, which has never made a profit despite booming sales in lockdown. 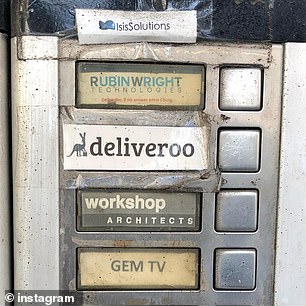 It came after two of Britain’s biggest investors will refuse to buy shares in Deliveroo when it launches on the stock market next month because of concerns about how they treat staff.

At the centre of the controversy is the company’s classification of its riders as ‘self-employed’, meaning they are not entitled to minimum wage, holiday pay or sick leave.

Investors say they have been spooked by the issue, which could cost the company huge sums after Uber agreed to pay their drivers more and give them the same rights as employees after a series of court cases.

Shu is set to offer the group’s most prolific riders up to £10,000 in cash each following the IPO, and customers are also being offered the chance to buy £50million in shares in multiples of £250.

Shu is set to offer the group’s most prolific riders up to £10,000 in cash each following the IPO, and customers are also being offered the chance to buy £50million in shares in multiples of £250 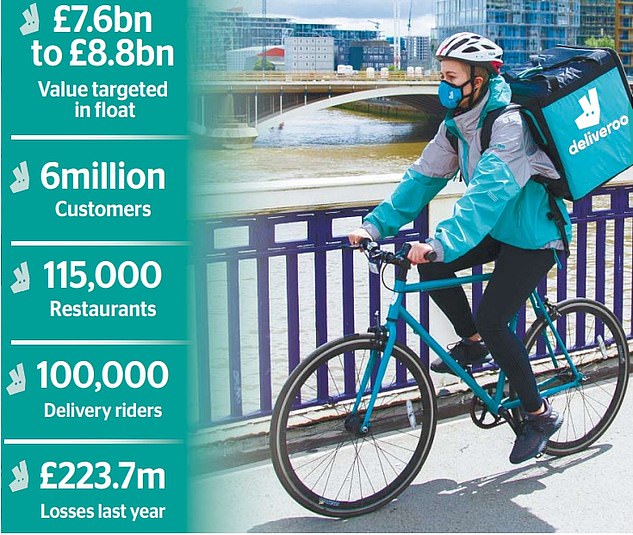 Aviva and Aberdeen Standard, two of the UK’s biggest asset managers, said they would not be buying Deliveroo shares because the firm does not pay riders the minimum wage or offer holiday and sick leave

Under the proposed listing, Deliveroo’s shares will have two classes.

Shu will have so-called Class B shares that carry 20 votes per share versus the one each carried by normal Class A shares.

But the company has said that dual structure – used by many tech firms in the US to preserve the control of their founders – will only be in place for three years.

The float was announced just days after the Government committed to changing the current rules in the favour of founders.

Documents published for the upcoming float reveal that Deliveroo has also set aside more than £112m to cover potential legal costs relating to the employment status of its riders.

Deliveroo works with 100,000 delivery riders across the world, who it argues are self-employed contractors rather than employees who would receive benefits such as holiday pay.

Earlier this month, the firm posted losses of £223.7m for 2020, despite surging sales amid lockdown restrictions.

The company said it saw transactions rocket by 64pc to £4.1bn in 2020 as the pandemic helped to spark increased takeaway demand.

It said that more than six million people order through the 115,000 restaurants, cafes and stores on its platform each month.

Such is the entrepreneur’s dedication to the business – and love of restaurant food – he orders breakfast, lunch and dinner through Deliveroo.

Although he loves ordering from KFC and Nando’s, Will does tend to order ‘regimented’ meals.

These include boiled eggs for breakfast, chicken and broccoli for lunch and a salad for dinner from restaurants around his west London home to help avoid piling on the pounds.

Mr Shu was born to Taiwanese parents in Connecticut in 1979. After getting a degree from Northwestern University he joined JP Morgan, first working in New York and then moving to their London headquarters.

It was there, while wandering Canary Wharf’s mall at night looking for restaurant quality meals, that he cooked up the idea for Deliveroo, setting up the firm and becoming its first rider.

He founded the business with his childhood friend Greg Orlowski, a software engineer who designed the app. Orlowski quit five years ago to spend more time with his daughter in Chicago, but he and Mr Shu remain friends.

Shu and Orlowski set up shop in a ‘death trap’ office in Marylebone shared with a company called ISIS and cable channel Gem TV.

The laid back and shy businessman’s, soon to be worth hundreds of millions of pounds, was known for his scruffy clothes and wearing a T-shirt and shorts all year round.

One colleague said: ‘He may have been the only founder who pitched us wearing shorts.

‘He wore shorts for the first four years I worked with him, regardless of the weather or the occasion.’

Another said: ‘I’ve seen him do every job in the company – from being a rider to doing customer service to signing up restaurants.

“His job is incredibly intense and he obsesses over it, but he’s always down to earth and has a laugh’.

After leaving their first office, they set up their headquarters on the banks of the Thames. 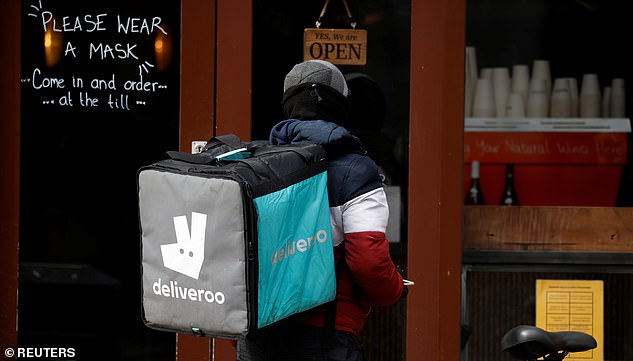 In demand: Deliveroo said the value of orders it received was up 121% in January and February – but it has never made a profit

Staff are encouraged to dress casually, with Shu keeping the T-shirt but swapping the shorts for smarter chinos.

In line with many tech firms, the building has plenty of sofas to flop on during the day and even a leisure area with games and a basketball court.

Jaegermeister is available for the staff if they want it, while office chairs are swapped for casual ‘swinging seats’.

Deliveroo has priced shares for its stock market float at the lower end of expectations after concerns from top investors over the status of its delivery riders.

It means Deliveroo’s maximum potential market valuation has fallen from £8.8bn to £7.9bn ahead of its debut as a publicly traded company tomorrow [weds].

Founder and boss Will Shu also stands to make less than before, with his maximum haul from selling shares falling from £30.8m to £27.5m and his remaining stake falling from £572m to £530m.

The decision came after a string of heavyweight City investors criticised the pay and conditions of Deliveroo’s riders and said they would not back its long-awaited float.

Aviva, Legal & General, M&G, BMO Global, Aberdeen Standard and others are among those that have voiced concern.

Deliveroo insisted that it had still received ‘very significant demand’ for the float and that the more conservative pricing was due to ‘volatile market conditions’.

But in a another blow, Scottish Mortgage became the latest investor to snub the listing as fund manager James Anderson said he was ‘lukewarm’ about it.

Anderson is one of Britain’s leading technology investors, known for being an early backer of electric car maker Tesla – and for reaping a huge profit after its shares surged last year.

He claimed that Deliveroo would find it ‘difficult’ to replicate its UK success around the world and that he backed rivals such as US-based Grubhub and China’s Meituan instead.

‘I think their model is successful in the unusual economics of London and it’s much more difficult to spread elsewhere,’ Anderson told the Times.

His comments come despite the fact his firm, Baillie Gifford, holds a small stake in Deliveroo through its private equity division.

Major backers set to make tens of millions of pounds from the listing include Amazon, which is selling shares worth up to £95.5m and will retain a stake of up to £860m.

The row over Deliveroo’s riders intensified last week following claims that some of them earn as little as £2 per hour.

Aviva last week said this was the main reason it had decided not to back Deliveroo’s float.

And in practice many riders earn less than the National Living Wage, set at £8.72 per hour, according to a report by the Bureau for Investigative Journalism, based on hundreds of invoices.

Deliveroo rejected the findings and claimed that riders earn an average of £13 per hour during busy periods.

It says its business model gives riders ‘freedom to choose when and where to work and which deliveries to accept and reject’.

A spokesman added: ‘50,000 riders choose to work with Deliveroo, and thousands more people apply to work with us every week. ‘Our way of working is designed around what riders tell us matters to them most – flexibility.

‘These unverifiable, misleading claims should not be taken seriously.’