Doomsday scenario: How the world will look in 2024 if trade talks fall apart

The year is 2024. While the world is not yet in a state of all-out violence, military tensions between Washington and Beijing are provoking talk of a gathering storm. 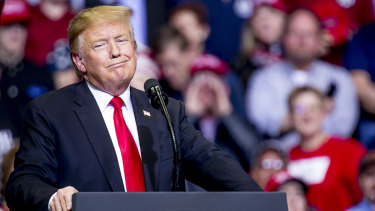 Markets are preparing for the scenario that ongoing US-China trade talks will fall apart. Credit:Bloomberg

A doomsday warning from the World Trade Organisation five years previously has come true. A full-blown trade war between the world's two great superpowers has wiped 17 per cent off global trade – a more extreme drop than that seen during the 2008 great financial crisis – precipitating a global downturn and a Chinese currency shock that sent a disinflationary wave across Asia.

China's third aircraft carrier is now two years old. It's steering a course uncomfortably close to the coast of Queensland, Australia. Once only a route for spy ships that were easily deniable, this is now openly hostile.

An unexplained communications blackout that lasted three days in the highly sensitive African port of Djibouti is about to be debated at the UN. The diplomatic circuit is buzzing with reports that London, which supplied much of the Djiboutian government's technology infrastructure, has sent a joint Pentagon and GCHQ task force to rebuild its IT network and check for any Chinese bugs.

The port is on a crucial trade route, acting as a gateway to the Suez Canal, and hosts both US and Chinese military bases within just a few miles of each other. The world's press talk of a "Gate of tears" (a translation of the Bab el Mandeb strait) since Saudi Arabia's decision to again stop oil export shipments through the passage. The move caused a price spike, triggering a blockade of aid to Yemen.

Americans are struggling to get visas to travel to Hong Kong and mainland China. US expulsions of Chinese and Russian tech workers accused of corporate espionage covered by its new industrial protections immigration policy have gathered pace. Both problems have become more acute since the world's two largest economies abandoned their seats at the umpire of global commerce, the World Trade Organisation, when its appellate body – which ruled on international trade disputes – collapsed under US pressure in late 2019.

Donald Trump is close to completing his second term in office. His daughter, Ivanka, is likely to secure the Republican nomination to run for the premiership. The Democrats and Republicans are both building on campaigns that support a hardline approach to curtailing Chinese power. Beijing's premier, Xi Jingping, is still in power, after quashing a potential coup within the People's Party following his decision not to intervene during the sharp devaluation of the Chinese yuan.

EU-US trade relations have descended into a tit-for-tat tariff fight throughout for much of the early 2020s. US corporate earnings weakened sharply thanks to poor business investment levels, triggering a large rise in default rates. The EU's structurally unsound banking system did not collapse entirely, but forced a move to true monetary union in the eurozone when Italy's aggravated doomloop caused three major banks to fail. Berlin, having effectively bailed out Rome, now faces calls for Germany to quit the EU from its angry taxpayers. China's housing market bubble, while not exploding, deflated in ugly fashion.

This catalogue of economic nightmares is not what Wall Street and markets around the world really expect to happen. However, for the first time, analysts accept it is an outcome that must be properly accounted for on their risk radars. Resources at some of the world's largest banks are now focused on pricing the unthinkable: all out trade war and the tensions which underpin it.

"There's an awful lot of sense in [US-China] agreement," says Andrew Milligan, a strategist at Aberdeen Standard Investments. "That's our central view. However, we then need to consider scenario analysis. Trade is only one of the issues we need to think about in the growing strategic rivalry between the US and China. How far might that go?"

The speeches from the Trump administration, exemplified by that Mike Pence delivered to the Hudson Institute in October last year, show the sheer breadth of Washington's concerns about the inexorable rise of China. Pence sounded a series of alarms about artificial intelligence, robotics and biotechnology. These issues, and Chinese involvement in communications networks such as Huawei's in European 5G, are pervasive market fears.

"The longer term context is that global trade growth hasn't been very strong for quite a few years now. Markets have been worried about the slow pace of nominal economic growth and top-line corporate sales for some time.

"Cyclically, are we going to see an upturn or do we start to see a series of [damaging] steps from Trump, not just [on] US-China, but if he turns his firepower to Europe and the auto sector?" Milligan asks.

The current scope of tariffs is relatively small in the context of global trade, but that would all change if Trump were to press ahead with further levies on imports from the EU as well as China. Brian Coulton, chief economist at credit ratings agency Fitch, thinks that if the US does impose tariffs on EU car imports then things could get far more economically troubling, fast. 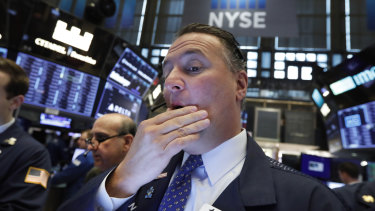 Markets around the world are on edge as the US-China trade spat intensifies. Credit:AP

"The further escalation scenario beyond this that would concern us particularly for the world economy would be auto sector tariffs. The car industry is very important to the eurozone. Value added in the auto sector is about 4-5 per cent of GDP in Germany. On previous form they would be looking to respond [issue retaliatory tariffs]. I think it could be quite awkward," says Coulton.

"The textbook theory is it would weaken. If the Chinese were appearing to be willing to allow a very sharp depreciation as a policy-condoned response to this then that has big implications for other emerging markets as well.

"You can sort of see a trade war morphing into global currency tensions which would really be quite a volatile environment. China would then be exporting a disinflationary shock to the rest of the world," Coulton adds.

Economic history shows a sharp increase in tariffs lowers output and raises prices. This was the problem faced during the Seventies oil price shock. Central banks face a very difficult choice on how to respond in such situations. Hiking interest rates might help constrain inflation, but then also act as a handbrake on growth during a period of weak economic performance.

"Inevitably, you can't get away from lower growth and higher inflation, that's where the world will go if it becomes less open to trade, investment and migration," Coulson says.

Citi does not think the world is due for another global recession. There are not the same ingredients for a downturn like the four since 1961, caused either by oil price spikes or "financial implosions" it notes in its latest report on the long term outlook. A hefty caveat is applied, however to its relatively sunny view: "Political risk is not dead."

Tina Fordham, Citi's chief political analyst, does not expect a recession – but is on guard for a political "mistake" causing a shock to the world economy.

"The key variable, really, is whether Trump is a one-term president or a two-term president. That has everything to do with the projection of and use of power, the participation in global institutions that mitigate trade and other disputes," she says.

This will determine the tactics used in the trade conflict and wider rivalry between China and the US. The economic impact of the tactics are significant because Trump's approach might be more volatile. However, Fordham is clear: taking a tough line with Beijing on trade and security is a rare area of bipartisan agreement between Democrats and Republicans. This is a "20-year trend" of "containment" Fordham says.

"Tech companies have been studying what the impact on their supply chains would be if the US were to withdraw from the WTO. There's also the potential that China would as well. Why would it clip its own wings to participate in a rules-based system if its peer isn't doing so?" says Fordham.

She adds: "So far, China has been extremely measured in its response. There may come a point where it decides to test the US and the West."