Why Bitcoin traders can expect a stronger future

BitMEX, the largest cryptocurrency derivatives exchange in the world landed in a heap of trouble with US law enforcement. One of the exchange’s co-founders and CTO, Samuel Reed was arrested, while charges of money laundering and other illegal transactions were issued against the other co-founders.

The entire market’s dependence on BitMEX cannot be understated. Back in March when the collective economic crash took a bite out of the crypto market, BitMEX had a big part to play in Bitcoin’s massive drop, and even perhaps its recovery. On March 12, Bitcoin dropped by over 50 percent, from over $7,700 to under $4,000, with the exchange’s servers dying out and the market accusing it of putting in place a circuit breaker. At the time of these accusations, BitMEX had over $1 billion in trade liquidations on its hand.

So, when Federal authorities came for BitMEX, you could see why it sent a shiver down the Bitcoin markets’ spine.

During this accumulation phase a week before the BitMEX news, the report stated that cryptocurrency investors kept “increasing holdings” which allowed the market to get through the short-term market weakness. Fleeting pieces of news like the BitMEX charges very often do not directly have a price play, but because of traders either reading too much or the hype media cycle emphasizing it too much, an artificial effect plays out. However, such an effect was nipped in the bud by hodlers who kept strong to their conviction. 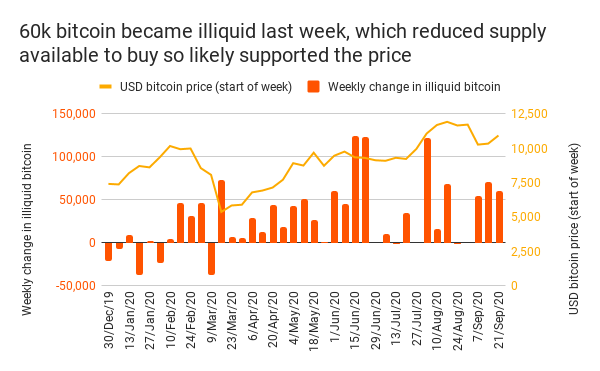 The report also outlined that, on the fundamentals, over 60,000 Bitcoin “became illiquid” last week, and yet this didn’t result in a drop. The report defines ‘illiquid Bitcoin‘ as “bitcoin sent to wallets that retain 75% or more of the bitcoin they receive,” implying this is the kind of transfer made by long term investors.

Such an illiquid Bitcoin trend was a common theme of September when prices were lower owing to the September 3 drop from $12,000 to $10,000. The larger picture still remains that lower prices are less a signal of fear and more a signal of buying opportunity for holders to increase their holdings, regardless of the short term negative signals of an exchange being charged with money laundering.