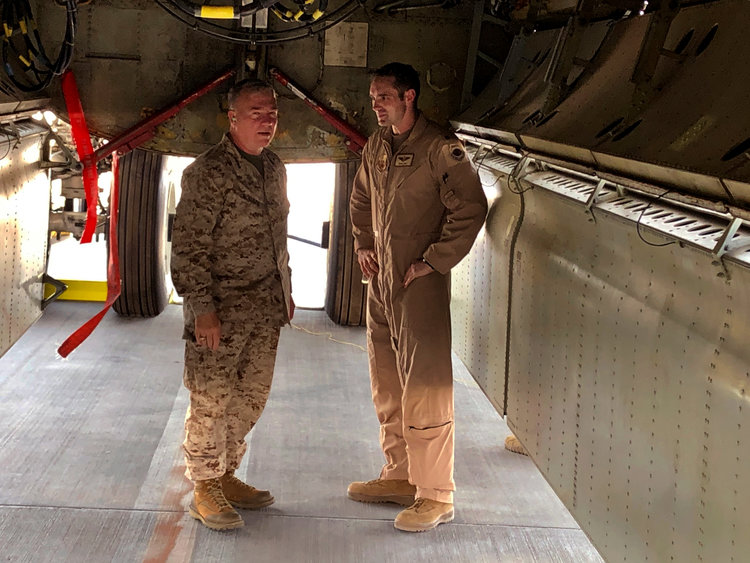 Marine Gen. Frank McKenzie, head of U.S. Central Command, confers with an Air Force officer below the bomb bay of a B-52 bomber on Friday, June 7, 2019 at al-Udeid air base in Qatar. McKenzie said on Friday that he thinks Iran had been planning some sort of attack on shipping or U.S. forces in Iraq. Two other officials, speaking on condition of anonymity to discuss sensitive details, said Iran was at a high state of readiness in early May with its ships, submarines, surface-to-air missiles and drone aircraft. “It is my assessment that if we had not reenforced, it is entirely likely that an attack would have taken place by now,” he said.(AP Photo/Robert Burns)Associated Press

ABOARD THE USS ABRAHAM LINCOLN (AP) — The USS Abraham Lincoln, with its contingent of Navy destroyers and cruisers and a fighting force of about 70 aircraft, is the centerpiece of the Pentagon’s response to what it calls Iranian threats to attack U.S. forces or commercial shipping in the Persian Gulf region.

The aircraft carrier is in international waters in the Arabian Sea. And the head of Central Command says it’s his assessment that if the U.S. hadn’t recently reinforced its military presence, an attack might have taken place by now.

The Lincoln’s presence seems to sending an a unmistaken signal to Iran that the foremost symbol of the American military’s global reach is back in Iran’s neighborhood, perhaps to stay.

In recent years, there has been no regular U.S. aircraft carrier presence in the Middle East.