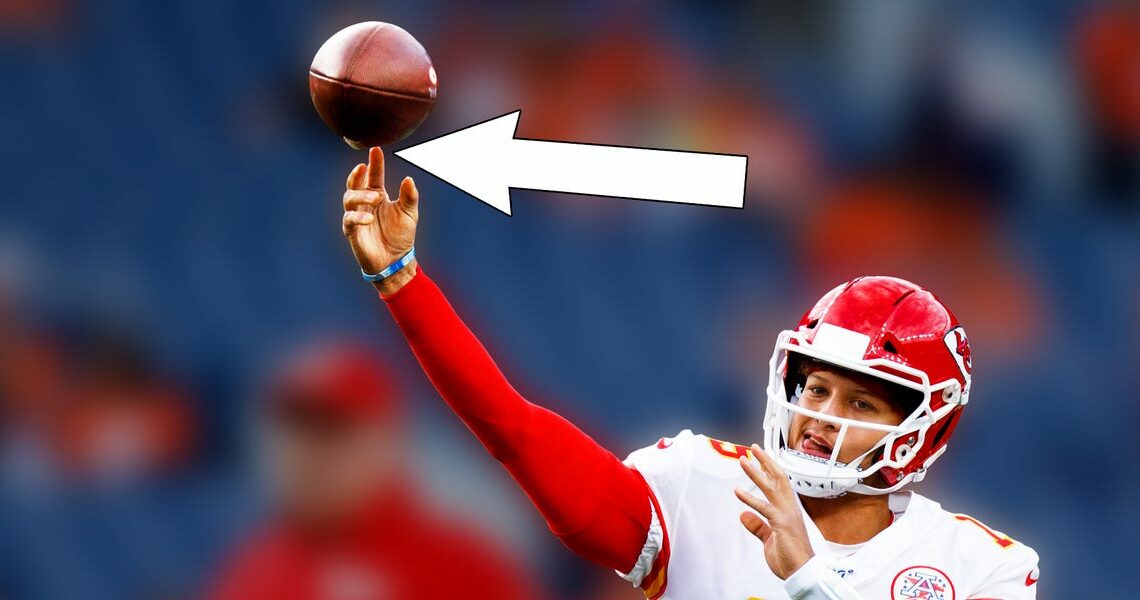 The science behind how NFL quarterbacks throw perfect spirals

Following is a transcript of the video.

Narrator: In 2018, NFL quarterbacks attempted over 17,000 passes. Of those, 64.9% were completed. That’s the highest completion percentage in league history. And if you look closely, all of those successfully completed passes had one thing in common: They were thrown with a nice, tight spiral. But throwing a perfect spiral isn’t as easy as it looks. Here’s what it takes.

First, we have to answer one basic question: How exactly do you throw a spiral? To answer that, we went to an expert.

Narrator: Larsen says that the first key to throwing a spiral is the grip. No matter a quarterback’s hand size, there are really only two fingers that are crucial to how they hold the ball.

Larsen: We’re gonna orient the best we can our middle finger and our thumb in a straight line on the ball, and then we’re just gonna wrap our fingers down and let them rest in control.

Narrator: After that, the quarterback’s goal is to build up force behind the ball. So, first, they’ll load the ball back, with their elbow above their armpit. This helps to ensure that the quarterback is what’s called being “on top of the ball.” That’s important because, otherwise, the quarterback won’t be able to throw as far.

Larsen: The second you’re low, now you’re, yet again, you’re pushing the ball. So when you try to drive that ball deep down the field, you’re underneath it, and you’re lacking arm strength.

Narrator: After that, the quarterback uses their other arm to twist their upper body while stepping forward into the throw as they prepare to release the ball. But a quarterback could complete all of these steps and never end up with a spiraling football. Getting that spiral comes down to the very last thing the quarterback does in the split second before they release the ball, and it comes back to the grip. Because, in order to generate a good spiral, the last finger that should touch the ball as the hand releases it is the quarterback’s index finger.

Larsen: The spiral’s created by that final flick, that last finger. You really want that last finger to come off of it and then finish down, and that’s that spin that you’re trying to get to create the spiral.

Narrator: But here’s the problem. Even the slightest of errors in how the quarterback lets go of the ball can affect the throw.

Larsen: If you’re finishing with the ball on your wrist, you’re finishing like that, now your index finger’s not the last finger. Now you’ve got multiple ones, and that’s when you start to get balls that get wobbly.

Narrator: And wobbly footballs are a quarterback’s worst nightmare.

Chad Orzel: Really, precision in the release and in the flight of the ball is absolutely critical to success if you’re gonna be a passing quarterback. My name is Chad Orzel, and I am a professor at Union College in the department of physics and astronomy.

Narrator: When it comes to how well a football flies through the air, there are two key elements: spin rate and velocity. Let’s start with spin. On average, a good spiral has a spin rate of roughly 600 rotations per minute. That’s as fast as an electric screwdriver.

Orzel: If you get the ball spinning rapidly, the ball will tend to stay with its axis of spin, pointing in the same direction all the time. So if it’s spinning fast and moving nose-on through the air, it’s going to feel a smaller air-resistance force, and that means it’ll go a little bit farther because of that.

Narrator: The reason a rapidly spinning football stays on course better than a slower-spinning ball is due to its angular momentum. Angular momentum measures how likely a ball is to wobble through the air or not.

Narrator: So a rapidly spinning football will fly straighter than one that isn’t spinning as quickly, and it will even help it fly a little farther. How far, however, mostly depends on the velocity of the ball flying through the air.

Orzel: The initial velocity that the ball’s given pretty much determines everything about the flight. It determines, all right, how high is the pass going to go in the air, the arc that it’s gonna follow, it determines how far it’s going to go.

Narrator: And building that velocity behind the ball is pretty straightforward. It’s all about muscle strength.

Narrator: However, velocity can be a double-edged sword. Because trying to increase the velocity behind a throw can sometimes compromise the integrity of the ball’s spiral.

Orzel: If you’re trying to throw the ball really, really hard, sometimes that means you can’t get as much spin on it as you would like, and then the ball ends up not going as far as it could, just because it doesn’t hold its orientation, and it tumbles in the air, and it’s not as accurate.

Larsen: The lower body is what creates everything in terms of that velocity, but if you have bad mechanics in your upper body, you’re not gonna be able to have a spiral to get the ball downfield.

Narrator: So, ultimately, the best throws come down to:

Larsen: Having a tighter spiral, and more velocity behind that spiral is gonna give you the ability to make throws on the field to be successful.

Narrator: So, if throwing the perfect spiral is just a matter of the right grip and sufficient strength, what distinguishes the mediocre quarterbacks from the greats?

Orzel: The key is getting just the right balance of precisely controlled velocity and a good spin rate on the ball.

Narrator: And, as the saying goes, practice makes perfect.

Larsen: Anytime you’re doing things repetitively, over and over and over, and creating that consistency, that’s gonna now give you accuracy. The second that your mechanics go out the door, your accuracy goes out the door, because now every throw is different.

Narrator: Of course, repeating those exact mechanics perfectly every time is easier said than done. Especially when your target is moving at 20 miles an hour and 300-pound defensive tackles are barreling toward you. But for the all-time greats, that skill is what makes them so special.

Larsen: You think about some of the most accurate quarterbacks of all-time, you think about Dan Marino. Unbelievable arm talent, unbelievably strong, could make every throw, his mechanics are perfect. People talk about Dan Marino having the quickest release they’ve ever seen, well, he has a quick release because there’s no inefficiencies in his throwing motion. Tom Brady is unbelievably meticulous with his mechanics, whether it’s footwork or how he’s throwing, yet again, it’s the consistency in your mechanics that’s gonna create accuracy.

EDITOR’S NOTE: This video was originally published in December 2019.