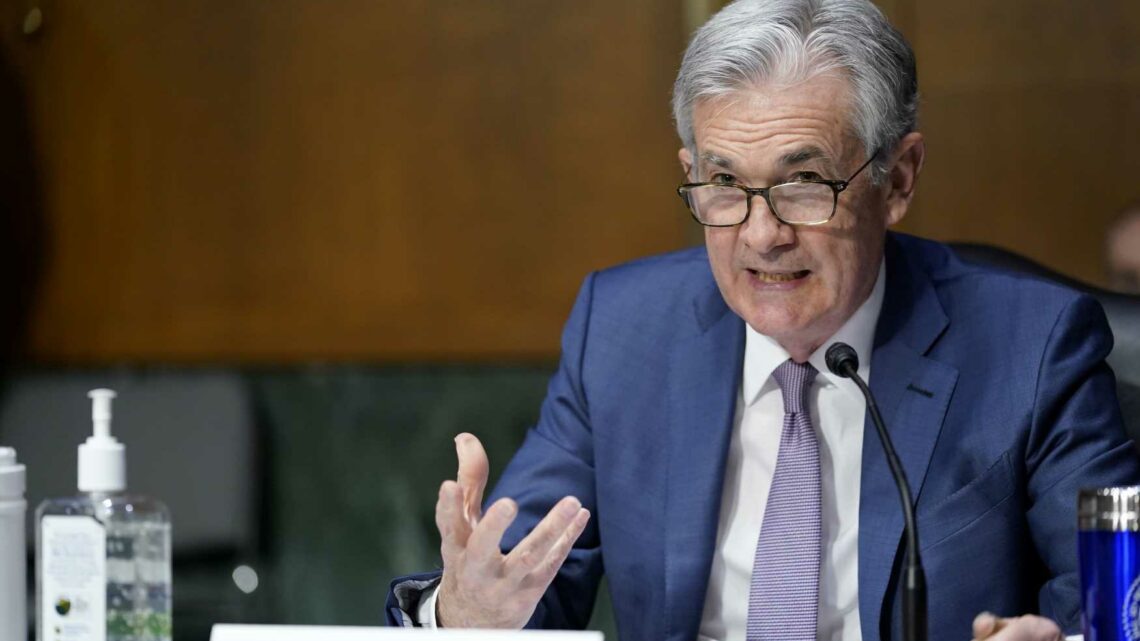 Market nervousness growing over Powell's testimony to Congress this week

The central bank chair is slated to address Senate and House panels on successive days as part of mandated semiannual updates on monetary policy.

Normally routine affairs, recent financial market tumult and concerns about how the Fed may react have investors paying a bit more close attention than usual to the hearings Tuesday and Wednesday.

"This is one of the more interesting episodes in which a Fed chair has had to testify," said Nathan Sheets, chief economist at PGIM Fixed Income. "Sometimes we say, 'ho hum, no news.' This is going to be news. He's really caught between a rock and a hard place."

What's got the market's attention recently has been a pickup in government bond yields, particularly further out on the curve.

While the 2-year is unchanged for 2021, the 5-year has risen nearly a quarter percentage point as of Friday's market close while the benchmark 10-year note has seen its yield jump 41 basis points to 1.34%, an area where it hasn't been since around the same time in 2020, before the worst of the pandemic struck.

The 30-year bond yield has surged even more, leaping nearly half a point this year to 2.14%.

Powell's dilemma is this: Rising bond yields could be signaling the reflation of the economy that the Fed has been pushing and are therefore higher for good reasons. However, should the trend get out of control, the Fed then might have to tighten policy faster than the market expects, offsetting some of the good that has come with the burst in yields.

"If this testimony was behind closed doors, I think Jay Powell would be quite pleased with what he sees in the economy and the markets," Sheets said, using the Fed chair's nickname. "But given that it's public, he's got to be careful. If he's too sanguine about the rise in rates, the markets are going to take that as a significant green light for rates to rip higher."

"The Fed is comfortable with an organic rise in rates reflecting shifts in views on growth and inflation," he added. "But I think the Fed also wants to be careful that it doesn't create and amplify a self-sustaining dynamic that pushes rates higher for other reasons."

Those "other reasons" primarily would be fears that the economy could overheat.

The Fed has run historically loose policy for the past year, dropping its benchmark borrowing rate to near zero and buying at least $120 billion of bonds each month. That's on top of a series of since-expired lending and liquidity programs implemented in the early days of the Covid-19 crisis.

Along with that, Congress has come in with more than $3 trillion of fiscal stimulus and could approve up to $1.9 trillion more by the end of week.

All that has transpired amid an economy that, besides a still-troubling employment problem primarily in the service sector, is humming. Wall Street is taking up first-quarter growth expectations and market-based indicators of inflation are rising.

That's why Powell's tightrope walk this week will be all the more compelling.

"The market mood has changed," Mohamed El-Erian, chief economic advisor at Allianz, said Monday on CNBC's "Squawk Box." It's no longer whether yields are going higher, it's when is the move too bid. That's what the market's trying to figure out."

Investors are particularly concerned whether all the stimulus isn't going overboard and threatening to destabilize the economy over the longer run.

"I can predict that the yellow lights are flashing all over the Fed because of the [yields] move and the steepening of the yield curve, and the Fed may do more to try to control yields," El-Erian said.

But the market could force the Fed's hand, and Powell is likely to get asked about where he stands on what tools the Fed has to calm market issues. He has repeatedly stressed that the Fed has the weapons to control inflation, but deploying those comes with a price. Markets used to low yields and companies accustomed to cheap borrowing costs could get rattled by an unexpected Fed move.

Evidence of how clearly the market is watching the issue came Monday morning, when European Central Bank President Christine Lagarde said she is "closely monitoring the evolution of longer-term nominal bond yields." Her words where enough to calm a jittery market and turn what had been an opening loss on Wall Street into a mixed market with the Dow up in early afternoon trading. Treasury yields were mostly flat on the day.

Tom Lee, managing partner and head of research at Fundstrat Global Advisors, noted that his "clients have already expressed some apprehension about this week. Part of this reflects the fact that bond yields have been steadily rising and equity investors are nervous that the bond market might reach some sort of 'breaking point'" during Powell's testimony.

Powell speaks Tuesday at to the Senate Finance Committee when Wednesday to the House Financial Services Committee.