TheHouston Ship Channel reopened to limited traffic on Sunday after a vessel collision dumped almost 400,000 gallons of a gasoline ingredient and choked suburbs of the U.S. city with noxious fumes.

A U.S. Coast Guard-led response team has begun the hazardous task of siphoning about 1.7 million gallons of the fuel component remaining inside a pair of barges damaged during the May 10 incident. For towns along Houston’s eastern rim, it’s thesecond time in two months that an industrial accident shuttered one of the nation’s busiest waterways and tainted the air with the scent of chemicals.

The response team assured residents itssampling efforts found no threats to human health downwind of the collision. But plumes of cancer-causing benzene were briefly detected during the weekend in the suburbs ofSeabrook and Bacliff, according to the Texas Commission on Environmental Quality.

It’s a jarring reminder of the benzene spikes that paralyzed daily life in nearby towns and sent scores of people to seek medical treatment after the mid-March fire and chemical spill atIntercontinental Terminals Co.’s complex along the south shore of the ship channel.

“Over the past two months, communities along the Houston Ship Channel have experienced possibly the worst series of benzene exposures in an urban setting seen in the United States,” Elena Craft, senior director, climate and health at the Environmental Defense Fund said in an email.

“If local and state leaders are serious about protecting public health, then they must adopt more stringent and legally enforceable standards for the most harmful pollutants, starting with benzene,” Craft added.

While a partial closure of the ship channel remains in effect, one-way ship and two-way barge traffic have been restored, according toupdate from the response team. As of 2 p.m. local time Sunday, 47 outbound vessels and 48 inbound vessels were waiting to pass through the channel.

Friday’s collision involved the tanker Genesis River and a tug transporting two barges carrying more than 2 million gallons of reformate, an oil-refining byproduct used to make gasoline. One barge capsized and the other was damaged following the incident that happened 2 1/2 miles east and south of the Bayport terminal.

The Houston Ship Channel is one of the most significantwaterways in North America, connecting oil shippers, refiners, chemical manufacturers and grain exporters to the rest of the world. 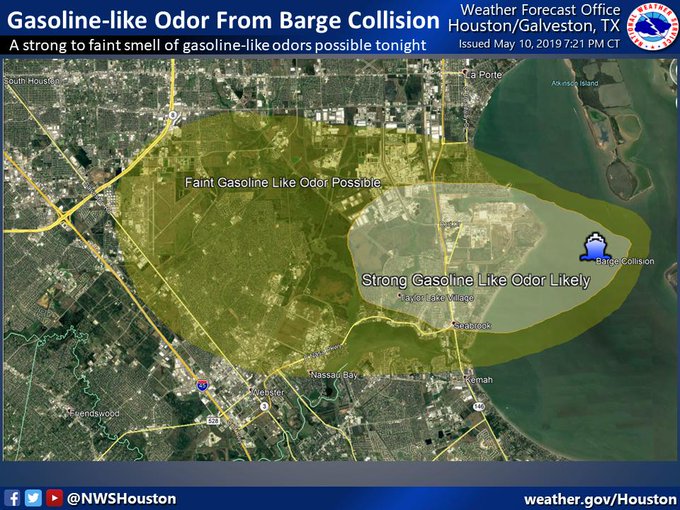 Teams of air monitors were working around the clock to assess levels. As of noon Sunday, 2,700 air samples have been taken and analyzed.

— With assistance by Joe Aboussleman, Robert Tuttle, and Stephen Cunningham