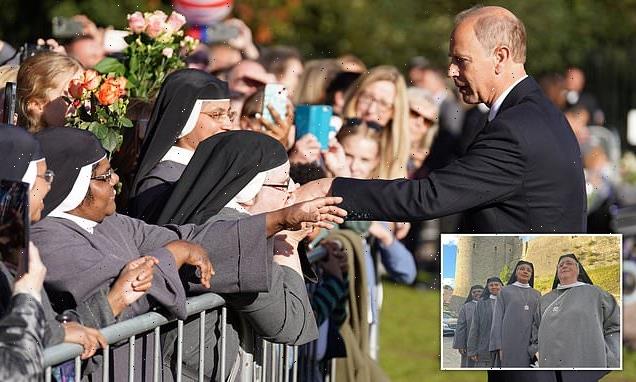 Nun says she was 'overcome with emotion' after the Queen's death

A nun who kissed the Earl of Wessex hand and that of his wife Sophie has said she ‘just had to do it’ after becoming ‘overcome with emotion’.

Speaking exclusively to MailOnline, Sister Clare Champion, 59, was joined by three other nuns from her Brigidine convent as they met Edward and Sophie.

They had waited more than three hours outside Cambridge Gate at Windsor Castle to lay flowers and say a prayer for the Queen and were just about to leave when they heard the royal couple were arriving.

TV cameras caught the moment as Sister Champion, who has been a nun since she was 20 years old, kissed Edward and Sophie on the hand. 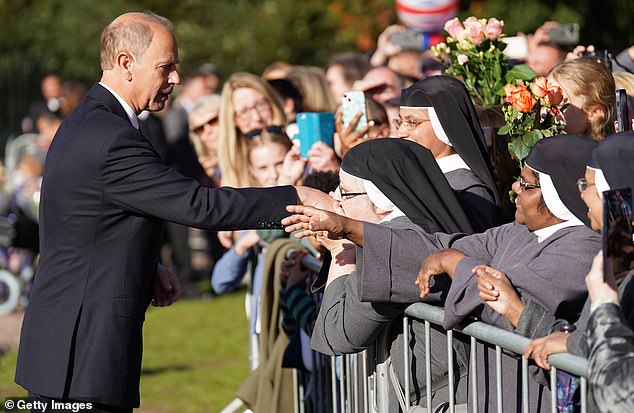 Speaking exclusively to MailOnline Sister Clare Champion, 59, was joined by three other nuns from her Brigidine convent as they met Edward and Sophie. Pictured: Sister Clare kisses Edward’s hand 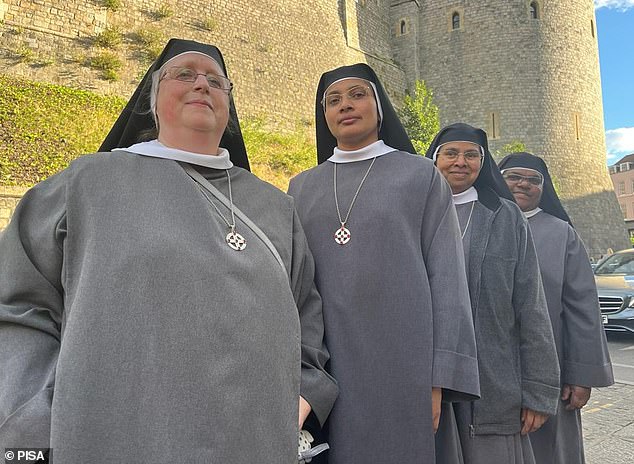 Sister Clare, pictured with the other three nuns, said that she was ‘overcome with emotion’ and had to kiss both of the royals on the hand

She said: ‘I told them both how all the sisters were sorry for their loss and I thanked them for what the Queen did and what they were doing.

‘I was just so overcome with emotion that I had to kiss them both on the hand, I hope they didn’t mind but they seemed lovely people.

‘I said we all adored the Queen because she was such a deeply faithful woman and very wise – none of us could get to London so we decided to come to Windsor instead.’

Sister Champion, who was once held hostage for two days in the Holy Land in 2006, added:’ I told Edward and Sophie we were praying for the Queen and her family.

‘We had quite a long chat and I said everyone was very grateful for what his mum had done and what her family are doing now.

‘I said we are feeling your loss and he said so was he and everyone in the family and he said everyone will eventually feel a loss of someone dear to them.’ 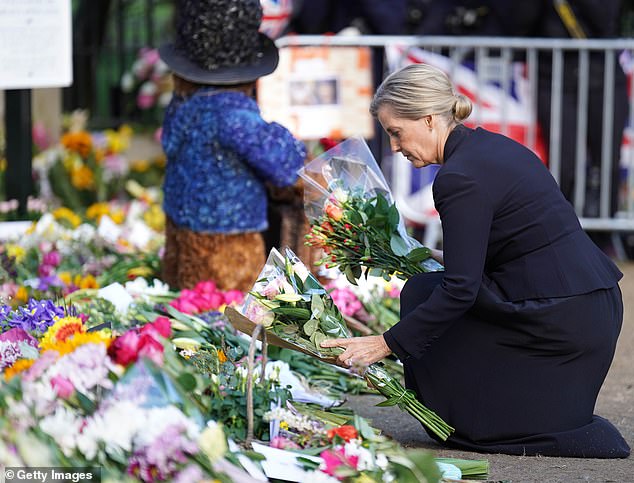 It comes after Sophie and Edward yesterday met crowds in Manchester.

Sophie met and embraced Josh, a young mourner who was waiting to see her with his mother, Sue.

Recounting the moment they met, Sue said: ‘She just said ”nice to meet you, do you want me to take your flowers?” Then Josh said ”can I have a hug?”. They hugged, then he asked for a photo. The bouquet is signed from Josh but it’s got my name on it as well.’

Asked what the moment felt like, Josh – who is non-verbal – replied: ‘Happy.’

Referencing the Queen, his mother added: ‘She’s like a grandma isn’t she, she’s always been there. We’re going to tell nanny and aunty Paula [about the experience of meeting Sophie].

In Manchester, Sophie, the Countess of Wessex , met Josh, a young mourner who had gathered in Manchester with his mother, Sue

Sophie, Countess of Wessex, embraces young Josh, as she views floral tributes in St Ann’s Square, during a visit to Manchester

Sophie and Edward also viewed floral tributes in St Ann’s Square and a book of condolence at the Central Library.

The couple travelled to Manchester a day after they paid their respects with the rest of the royal family at Westminster Hall, where the Queen is lying in state.

Members of the public have flocked to the cathedral since the monarch’s death to sign a book of condolence and light a candle.

The earl and countess were invited by the Dean of Manchester, the Very Rev Rogers Govender, and the Bishop of Manchester, David Walker, to each light a candle.

They were also shown photographs of the Queen’s last visit to the cathedral, to mark the 600th anniversary celebration of the collegiate church in July 2021.