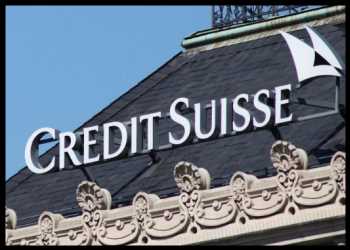 Shares of Credit Suisse Group AG were losing around 14 percent in the morning trading in Switzerland as well as 11 percent in pre-market activity on the NYSE, after the Swiss banking major reported Thursday a hefty loss in its third quarter, compared to prior year’s profit, mainly hurt by weaker performance for Investment Bank. The company also projects a net loss for the Group in the fourth quarter.

The company further announced that from today, it is taking a series of decisive actions to re-focus. The new, integrated model will be focused on Wealth Management, the Swiss Bank, as well as Asset Management, and the company will radically restructure the Investment Bank, strengthen capital, and accelerate cost transformation.

The bank estimates restructuring charges, software and real estate impairments in connection with the transformation of 2.9 billion francs over a period from fourth quarter to 2024.

The company intends to raise capital with gross proceeds of around 4 billion francs through the issuance of new shares, subject to approval at a forthcoming Extraordinary General Meeting on November 23.

Lopez Lorenzo will be appointed non-executive member of the Board of Credit Suisse Bank (Europe), S.A. in Spain, subject to regulatory approval.

In addition, Credit Suisse said it has signed a framework agreement to sell a significant portion of its Securitized Products Group and other related financing businesses to an investor group led by Apollo Global Management. Closing of the proposed deal is expected to occur during the first half of 2023.

A headcount reduction of 2,700 full-time-equivalent employees, or 5 percent of the Group’s workforce, is already underway in the fourth quarter of 2022.

Credit Suisse expects to run the bank with about 43,000 full-time-equivalent employees by the end of 2025 compared to about 52,000 at the end of the third quarter of 2022, reflecting natural attrition and targeted headcount reductions.

Regarding the third quarter, Ulrich Körner, Chief Executive Officer of Credit Suisse, said, “The third quarter, and more broadly 2022 so far, have been significantly impacted by the continued challenging market and macroeconomic conditions, leading to a weaker performance for our Investment Bank in particular. Our recent Group level performance has been disappointing…”

In Switzerland, Credit Suisse shares were trading at 4.08 francs, down 14.26 percent.