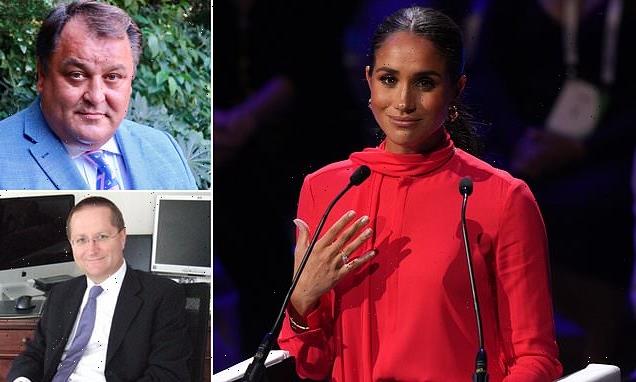 ‘She didn’t say anything!’: Royal experts say Meghan Markle’s seven-minute One Young World speech ‘lacked content’ and her claim that it is ‘nice’ to be back in the UK should be ‘taken with a pinch of salt’ after recent jibes at Royal Family

Royal experts are criticising Meghan Markle’s speech at the Young One World summit for ‘lacking content’ and being riddled with insincere remarks including how it was ‘very nice to be back in the UK.’

Meghan, 41, delivered a keynote speech at the event in Manchester on Monday, telling young leaders ‘you are the future… you are the present’.

Former actress Meghan told the 2,000 delegates how her life had changed when she last joined the summit in London in 2019 – singling out her role as a wife and a mother – but making no mention of becoming a senior royal the year before.

However, royal experts argue Meghan’s address featured a ‘severe lack of content’ and ‘didn’t tell the audience anything practical in terms of advice to fulfil their potential.’

On the contrary, the appearance emphasised how Meghan is a ‘first class orator’ despite the fact that her remarks of gratitude for the UK ‘should be taken with a pinch of salt.’

The speech comes amid tensions between the Sussexes and the Royal Family that were furthered last week after an interview which saw Meghan suggest she and Prince Harry were forced to move across the Atlantic because ‘by existing, we were upsetting the dynamic of the hierarchy’. 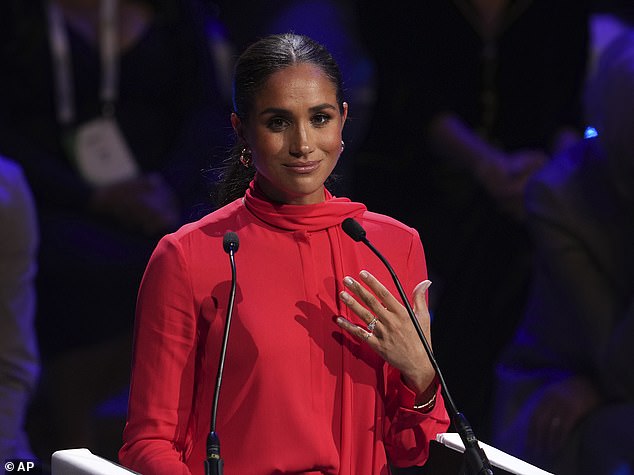 Royal experts are criticising Meghan Markle’s speech at the Young One World summit for ‘lacking content’ and being riddled with insincere remarks including how it was ‘very nice to be back in the UK.’ The Duchess of Sussex is pictured during her keynote address Monday night 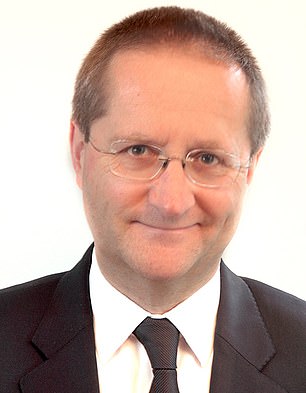 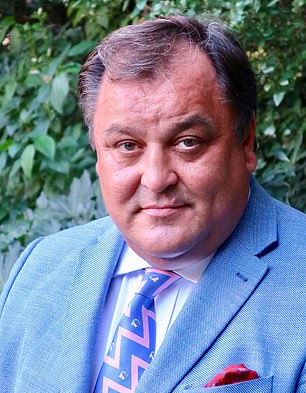 Royal author Phil Dampier (left) accused the duchess of ‘wanting to sound sincere’ as she took the stage all-smiles and featuring an extremely friendly attitude. Robert Jobson (right), author of ‘William at 40: The Making of a Modern Monarch’ echoed the sentiment, saying her remarks of gratitude for the UK ‘should be taken with a pinch of salt’

Meghan on Monday night made her first in-person address in Britain since quitting as a working royal amid the Megxit crisis more than two years ago.

In her PR-friendly speech, Meghan said ‘it is very nice to be back in the UK’ and gushed about Harry, 37, and the ‘life-changing’ impact of becoming a mother to Archie, now 3.

Royal author Phil Dampier accused the duchess of ‘wanting to sound sincere’ as she took the stage all-smiles and featuring an extremely friendly attitude.

But despite her efforts, Mr Dampier claims ‘there was a severe lack of content in what she was saying.’

‘She was using her acting skills when she made the comment about being back in the UK,’ he told Mail Online. ‘She clearly launched a PR offensive having received hostility from the British press.

‘If she met most members of the public in the UK she wouldn’t get good reception, but on stage with an audience that tends to be on her side – or is inclined to support her – she could get away saying very little and being applauded for it.’

Robert Jobson, author of ‘William at 40: The Making of a Modern Monarch’ echoed the sentiment, telling Mail Online: ‘There is no doubt that Meghan is a first class orator. She speaks with passion and engages her audience. I’m sure she is thrilled to have her voice back!

‘I’m sure too that after all the attacks she has made against the Queen and the British royal family Her Majesty leads, that her comment saying that it is good to be back in the UK should be taken with a pinch of salt.’ 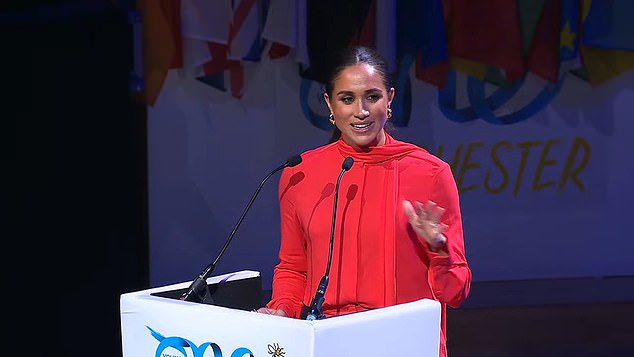 In her PR-friendly speech, Meghan (pictured) said ‘it is very nice to be back in the UK’ and gushed about Harry and the ‘life-changing’ impact of becoming a mother to Archie, now 3 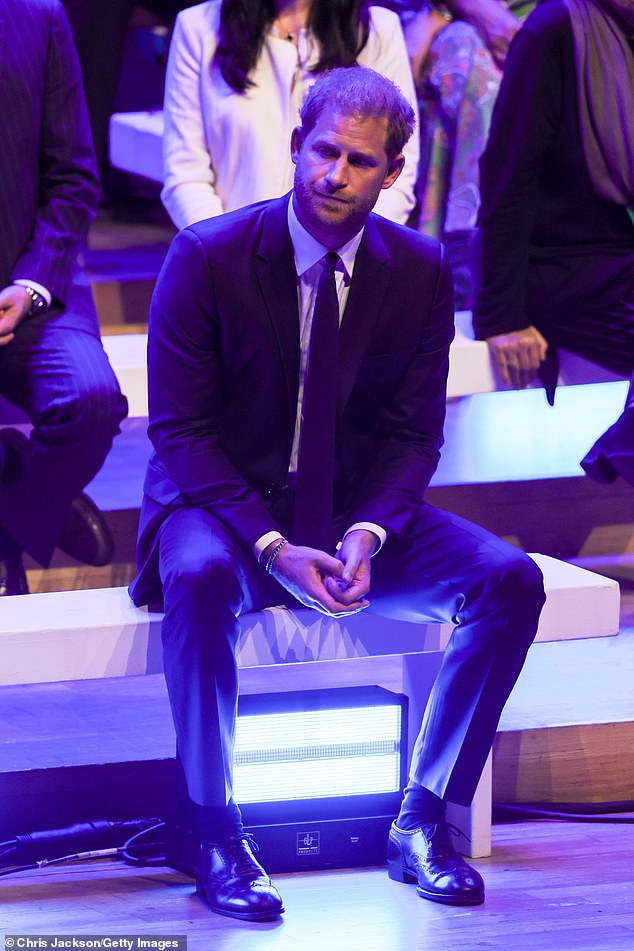 Mr Jobson said the speech made him feel as if Meghan has a ‘political agenda long term’ and is trying to prepare for a political role ‘maybe in Congress or the Senate.’

‘But to do that I think she must ditch the royal ‘duchess’ title that is linked to a system and a family she appears to despise,’ he added.

‘If she did that it might placate some people in the UK who feel both Harry and Meghan should be stripped of their royal title.’

‘But as they use their links with royalty to promote themselves I doubt she and her princely born husband will ever do that.’

Mr Dampier noted that Harry looked ‘ill at ease and embarrassed’ when Meghan referred to him in the address.

He also pointed out how the audience applauded Meghan’s ‘fairly dull’ remarks about being a wife and mother, even though they really didn’t apply to the young audience.

‘She was clearly among friends and the young audience was clearly on her side. They were applauding fairly dull remarks that she was a wife and mother,’ he said, adding: ‘But in terms of what she was actually saying, I haven’t a clue.

‘The speech was really about her. She was using it as a platform to talk about herself and her past involvement with the organisation but it didn’t tell the audience anything practical in terms of advice to fulfil their potential.’ 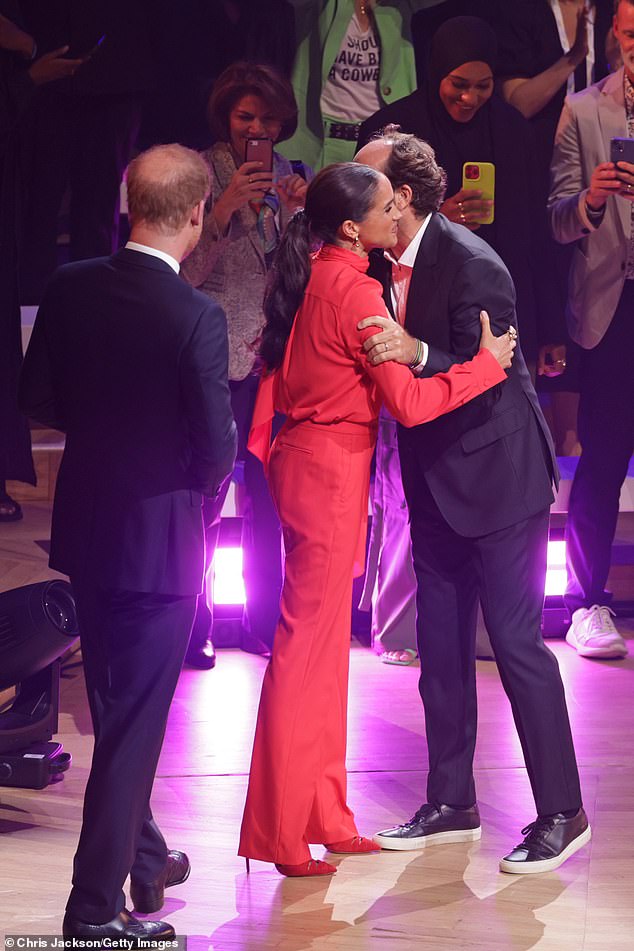 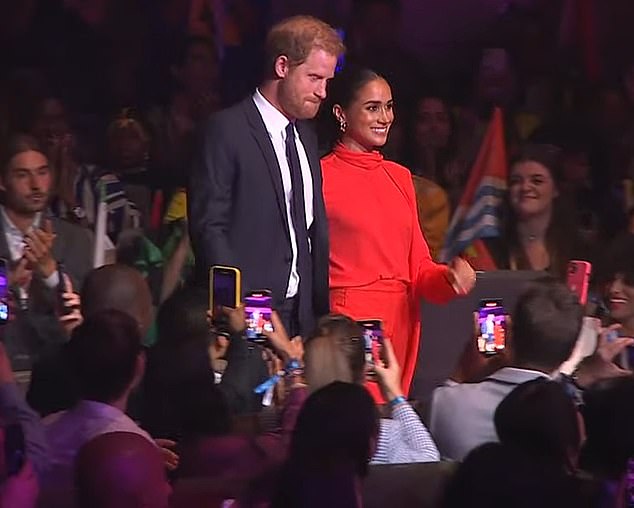 Harry and Meghan were all smiles as they walked hand-in-hand past the 2,000-strong crowd at Bridgewater Hall, filled with young people from around the world (pictured)

The former Suits star, who was dressed in a vivid red high-necked sleek trouser suit, smiled broadly and held hands with the Duke of Sussex as the couple made their way through the auditorium to huge cheers, as delegates held up their phones to film them.

‘I joined you in London in 2019. And by that point, it’s fair to say, my life had changed rather significantly. I was now married, and I was now a mom,’ Meghan told the audience, leaving a pause at the end which was filled with huge cheers.

‘My world view had expanded exponentially, seeing the global community through the eyes of my child,’ she added, speaking about her son Archie.

She also spoke about the first time she was asked to be a counsellor for One Young World in 2014 and having a ‘pinch me moment’.

‘And there I was, the girl from Suits. I was surrounded by world leaders, humanitarians, prime ministers and activists that I had such a deep and long-standing respect and admiration for.

‘And I was allowed in, to pull up a seat at the table.

‘I was so overwhelmed by this experience, I think, I think I even saved my little paper place-marker with my name on it.

She added that she had doubted herself despite her what she saw as her ‘important and meaningful’ work, but said One Young World had seen in her ‘the present and the future’.

‘I was so nervous, I doubted myself and I wondered, wondered if I was good enough to even be there?

‘What I was doing in the world, albeit important and meaningful as far as I saw it, was it deserving to have a seat at this table?

‘But One Young World saw in me what I wanted to see fully in myself. They saw in me, just as I see in you, the present and the future.’ 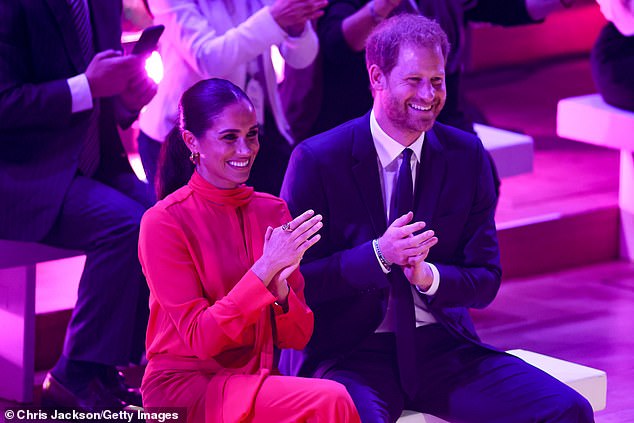 Meghan, Duchess of Sussex and Prince Harry, Duke of Sussex clapping during the Opening Ceremony of the One Young World Summit 2022 at Bridgewater Hall 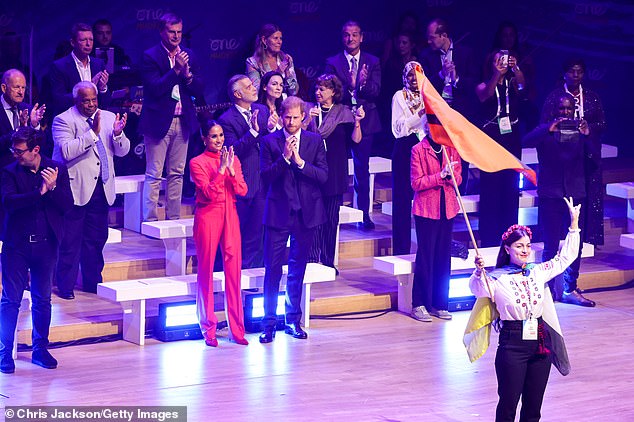 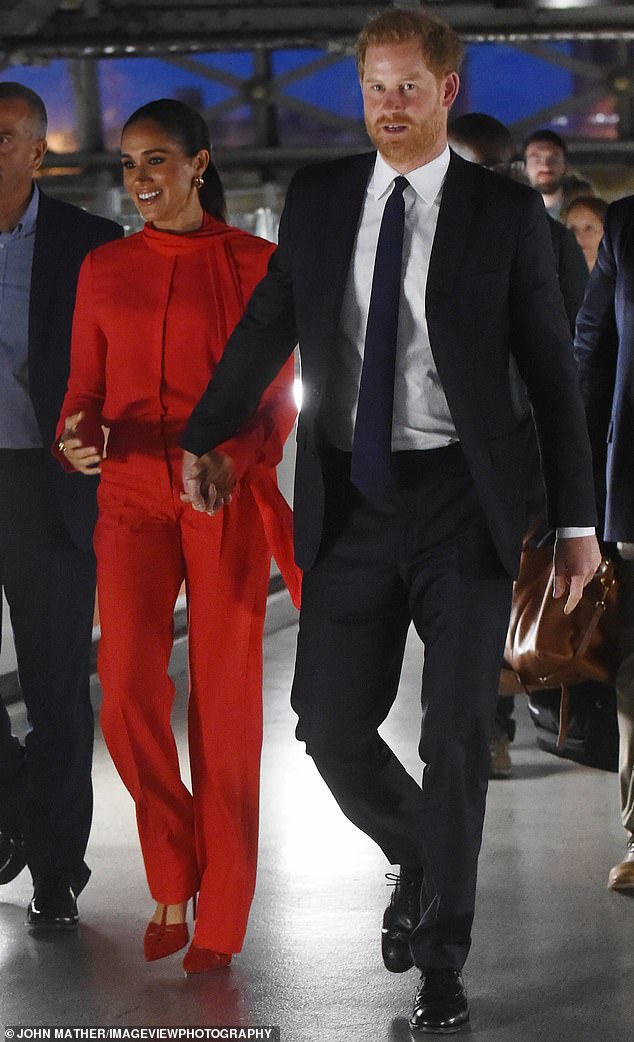 Meghan and Harry pictured at Manchester train station, presumably heading back to London ahead of their next stop in Dusseldorf, Germany

During the proceedings on Monday, the couple sat in the front row on stage, side by side on a bench, as they joined One Young World counsellors to watch the flag bearers enthusiastically parading the flags of more than 200 countries.

Meghan, with her hair in a ponytail, swayed in time to the music, which included Dancing In The Streets and Respect, as she clapped her hands.

Harry leaned over to whisper in his smiling wife’s ear a number of times.

To cheers, Meghan said in her speech: ‘I’m thrilled that my husband is able to join me here this time.’

She added: ‘My husband has long advocated for important and necessary impact in the world, focusing a huge part of his life’s work on the youth.

‘For both of us, bearing witness to the power that you hold in your hands and the unbridled enthusiasm and energy that you have to see things come to fruition, it is just an absolute privilege.’

The couple travelled by train from London to Manchester, and flew commercial from the US to the UK.

The Sussexes have reportedly hired one of Harry’s ex-Metropolitan Police protection officers, who is said to now work in the private sector, as part of their security team for the whirlwind working trip.

The duke is bringing legal action against the Home Office over a decision not to allow him to pay for police protection for himself and his family when in the UK.

Harry and Meghan are staying at their Frogmore Cottage home on the Windsor estate, but are not expected to meet with the Cambridges, who have moved to Adelaide Cottage, less than a 10-minute walk away.

Next stop for the Sussexes will be Germany, for the Invictus Games Dusseldorf 2023 One Year To Go event, which is taking place on Tuesday, before they return to the UK for the WellChild Awards in London, where Harry will deliver a speech on Thursday.