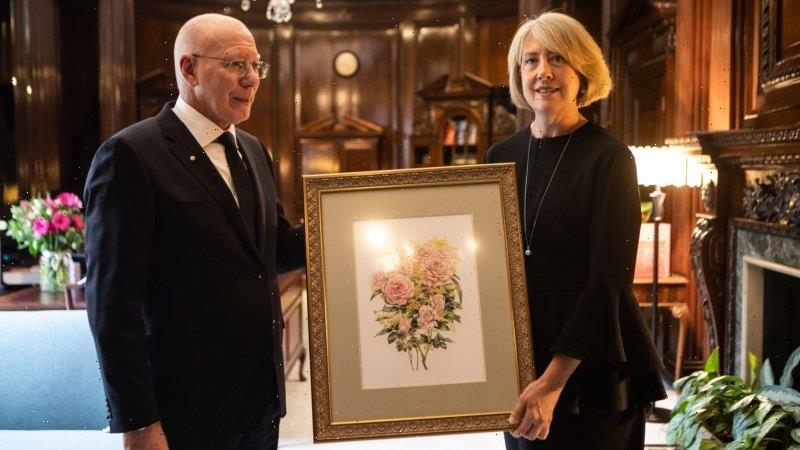 London: The late Queen was so taken with a gift from Australia’s governor-general – a botanic painting of roses named in her honour and a golden wattle – that she had it hung in her private study at Balmoral during her final days.

The present, commissioned for her Platinum Jubilee in June this year, was painted by senior Australian diplomat Heidi Venamore, who now serves as ambassador to the United Arab Emirates. 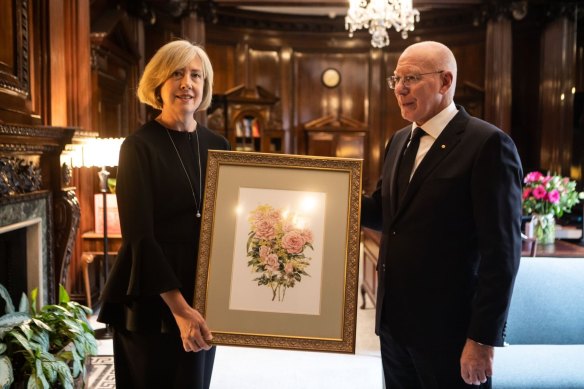 Lynette Wood, Australia’s acting high commissioner to Britain, is presented with a replica of a painting by senior Australian diplomat Heidi Venamore given to the late Queen by Governor-General David HurleyCredit:Jenny Magee

Governor-General David Hurley, who will attend the late monarch’s funeral with his wife, Linda, said the watercolour and graphite painting was presented to then-prince Charles at the Commonwealth Games in Birmingham in late July, before it was later given to his mother on her summer holiday in Balmoral.

Venamore is an acclaimed botanic artist who paints in her spare time. Over a distinguished diplomatic career, she has served as ambassador to Jordan, as head of the political/trade branch at the Australian high commission in London and deputy head of mission in Baghdad. 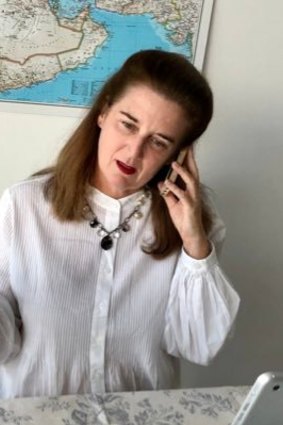 Hurley said the pair travelled in a car in Dubai when he visited Expo 2020 in January, when he had a “light bulb” moment.

“It just came up in passing. We were in the back of the car chatting away, and I asked: ‘What do you do when you’re not being an ambassador?’ ” Hurley said.

“And then she said, ‘A botanic artist.’ And then this light bulb went off in my head thinking like, ‘I think it’s something we could do there.’ ”

The Queen Elizabeth II rose, cultivated by Harkness Roses UK, was chosen by the late Queen as the floral emblem to mark her celebration of 70 years on the throne this year. The large classic shaped flowers combine elements of soft pink, light amber gold and cream, and a strong sweet rose scent. They were flown to the Middle East with the golden wattle – picked to represent the partnership of the two countries.

“There’s a story behind that because Heidi only paints from real life,” Hurley said. “So trying to get roses to Dubai, or to Abu Dhabi, so she could paint them was a trial that didn’t work out successfully, but she managed to get hold of some wattle in the end. So, it was quite a journey. There’s 150 hours of work in the painting.

“And I am told her majesty was completely taken by it, and decided to have it hung in her study in Balmoral until her passing, which is just lovely to know.” 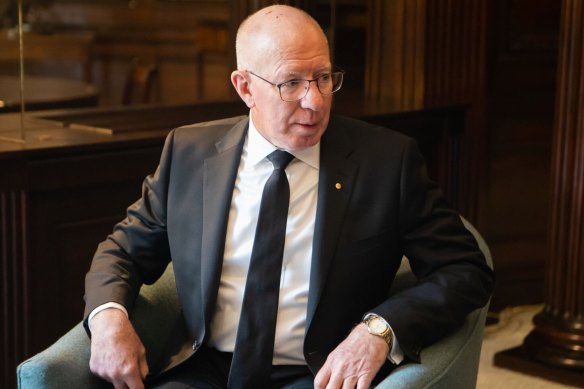 Australian wattle, hand-picked from Cooma, which accompanied Hurley and the official travelling party from Canberra to London, will form part of the floral tributes and wreaths at the funeral.

The retired general and former chief of the Australian Defence Force met the monarch four times in person during his long and decorated public life, and spoke to her on the phone and via video link on countless other occasions.

Their last conversation was in April when, as part of the Jubilee celebrations, he joined Australian of the year winners in a lengthy video call from Canberra.

He said he recalled a poignant conversation following the death of Prince Philip, during which they spoke about growing old.

Hurley said he was never “schooled” by her in their conversations, but was reminded on why the role existed and what the relationship should be.

“Just by her questioning, she would make you aware. You’d think ‘OK, she thinks this is important, or that’s important,’ ” he said. “Particularly when it came to natural disasters, she always wanted to make sure she was in the loop.”

Hurley said he understood many Australians would want to debate the future of Australia’s links to the monarch and issues such an Indigenous reconciliation, but pointed to the clear timetable set out by Prime Minister Anthony Albanese.

“I take the view at the moment that we mourn her loss with [all the] dignity we can muster, given her service,” he said.

“The prime minister has been very clear in his timetable for discussion [on] other matters, but he has other priorities.

“My role is to be supportive of, you know, the quality of the debate, the respect and the dignity of debate on any of these issues when they come up.”

Receive a wrap of our coverage as the world mourns Queen Elizabeth II in our Morning Edition newsletter. Sign up here.

Could an Earnings Recession Lead to More Pain for Crypto?
Technology