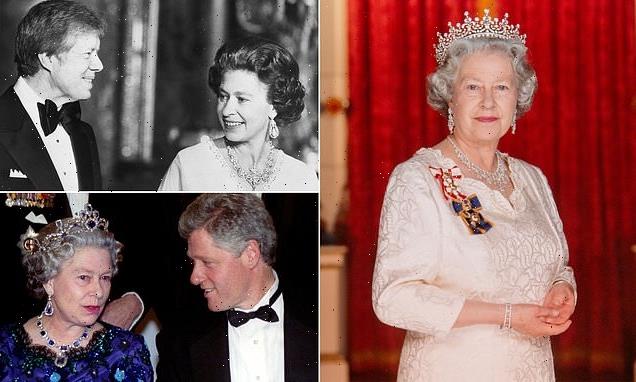 Presidents Obama, Clinton, Bush and Carter pay tribute to the Queen, her remarkable 70-year reign and her impact on the special relationship after her death at 96

U.S. Presidents from both parties whose terms spanned decades acknowledged the Queen’s dignity and grace in statements Thursday on on the death of the monarch each of the presidents had met personally while in office.

Former Presidents Bill Clinton and Jimmy Carter were among the first to hail the Queen’s rule and character. They were followed by public condolences and remarks celebrating the Queen by Presidents George W. Bush, Donald Trump, and Barack Obama.

Bush held up her charm and wit – recalling fond memories visiting with the Queen and her beloved corgis.

‘Hillary and I mourn the passing of Her Majesty Queen Elizabeth II, and we join with people across the United Kingdom and the Commonwealth, and all around the world, in giving thanks for her extraordinary life,’ former President Bill Clinton, 76, said in a statement that also referenced former first lady Hillary Clinton.

‘Throughout her remarkable 70-year reign, she led Britain through great transformations with unfailing grace, dignity, and genuine care for the welfare of all its people. In sunshine or storm, she was a source of stability, serenity, and strength,’ said Clinton, in a statement released by the Clinton Foundation that he posted on Twitter. 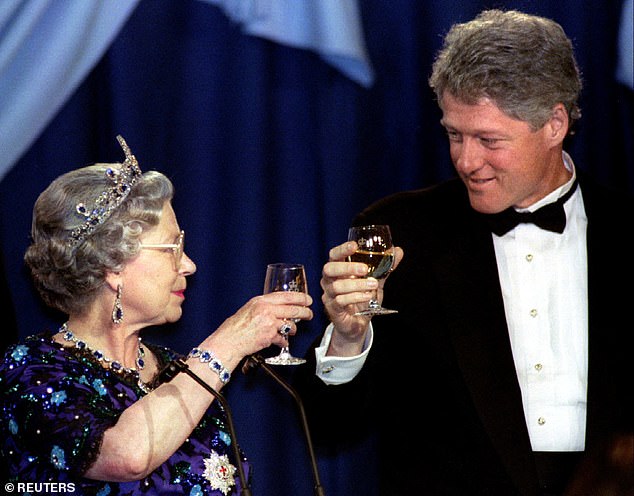 Former President Bill Bill Clinton praised the Queen’s ‘unfailing grace, dignity, and genuine care’ in a statement. They toasted during events in Portsmouth in 1994 to mark the 50th anniversary of the D-Day invasion

Clinton also pointed to two visits he and then-first lady Hillary Clinton made to Buckingham Palace during his two terms in office.

They also met in Portsmouth in 1994 during events to mark the 50th anniversary of the D-Day invasion.

‘We will always be grateful for the kindness she showed us through the years, particularly during tour visits to Buckingham Palace in 1995 and 2000, and for all she did to deepen the Special Relationship,’ he said.

‘Our thoughts and prayers are with the Royal Family and all the people Her Majesty inspired throughout her lifetime of service,’ Clinton said.

‘Rosalynn and I extend our condolences to the family of Queen Elizabeth II and the citizens of the United Kingdom. Her dignity, graciousness, and sense of duty have been an inspiration, and we join the millions around the world in mourning a remarkable leader,’ he said in a short statement.

‘Laura and I were honored to have known her Majesty Queen Elizabeth II. She was a woman of great intellect, charm, and wit,’ Bush said in a statement with former first lady Laura Bush.

‘Spending time at Buckingham Palace, and having tea with Her Majesty – and her Corgis – is among our fondest memories of the presidency,’ he said.

‘Queen Elizabeth ably led England through dark moments with her confidence in her people and her vision for a brighter tomorrow. Our world benefitted from her steady resolve, and we are grateful for her decades of service as sovereign. Americans in particular appreciate her strong and steadfast friendship. Laura and I join our fellow citizens in sending our heartfelt condolences to the Royal family and the British people.’

The Bushes visited the Queen in 2001, when she and Prince Philip hosted them for lunch.

Former President Donald Trump also released a statement, in his case on his own Truth Social site.

Trump met the Queen twice as president, first at Windsor Castle for tea in 2018 and then during a full state visit the following year.

‘Melania and I are deeply saddened to learn of the loss of Her Majesty Queen Elizabeth II,’ Trump said.

‘Together with our family and fellow Americans, we send our sincere condolences to the Royal Family and the people of the United Kingdom during this time of great sorrow and grief.

‘Queen Elizabeth’s historic and remarkable reign left a tremendous legacy of peace and prosperity for Great Britain,’ he added.

‘May God bless the Queen, may she reign forever in our hearts,’ he concluded.

‘Like so many of you, Michelle and I are grateful to have witnessed Her Majesty’s dedicated leadership, and we are awed by her legacy of tireless, dignified public service. Our thoughts are with her family and the people of the United Kingdom at this difficult time,’ Obama said in a statement on Twitter.

He acknowledged the Queen just a day after reflecting on his own legacy during his portrait unveiling at the White House.

‘Her Majesty worked with 15 Prime Ministers and countless foreign heads of state,’ said the Obama statement. ‘She listened deeply, thought strategically, and was responsible for considerable diplomatic achievements. And yet, she wore her lofty titles with a light touch—as willing to act in a comic sketch for the London Olympics as she was to record steadying messages for the people of the UK during the COVID-19 lockdowns.’

The Obama statement ran to six paragraphs, and put the Queen’s reign into historical context.

‘During World War II, she became the first-ever female royal to serve on active military duty. And through periods of prosperity and stagnation – from the moon landing, to the fall of the Berlin Wall, to the dawn of the digital age – she served as a beacon of hope and stability for the people of the United Kingdom and the world,’ the Obamas said.

They also spoke in personal terms about their 2009 meeting with the Queen during Obama’s first year in office, when then-first lady Michelle Obama broke protocol by putting an arm around the monarch. She later wrote that it came after the two were commiserating over their uncomfortable footwear.

‘Michelle and I were lucky enough to come to know Her Majesty, and she meant a great deal to us. Back when we were just beginning to navigate life as President and First Lady, she welcomed us to the world stage with open arms and extraordinary generosity,’ they said.

‘Time and again, we were struck by her warmth, the way she put people at ease, and how she brought her considerable humor and charm to moments of great pomp and circumstance.’