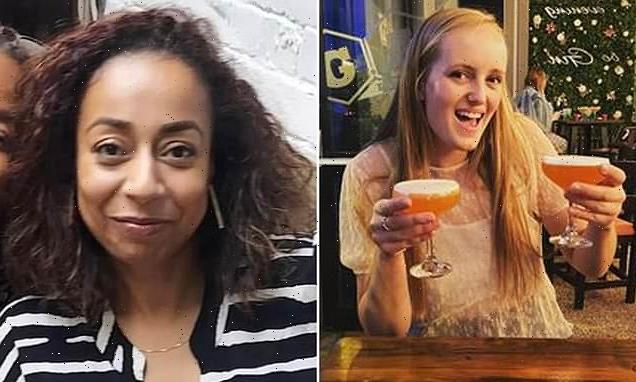 Police 'told woman victim to get her stalker to ATTACK her'

Police ‘told woman to encourage her stalker to ATTACK her’ so they could arrest him: Victims make shocking claims – as campaigners launch super-complaint over ‘deep-rooted systemic issues’ in how forces tackle stalking

A senior officer told a woman to ‘engage with your stalker and encourage him to attack you’ so they could arrest him as victims lay bare shocking claims about their treatment by police.

It comes as campaigners have launched a super-complaint against forces today over concerns there are ‘deep-rooted systemic issues’ in officers’ responses to victims.

The Suzy Lamplugh Trust has submitted a report detailing what they claim is a pattern of behaviour across all police forces in England and Wales that highlights a ‘significant number’ of victims are being let down ‘at every step of their journey’.

Today marks 10 years since the law was changed to make stalking a specific crime in England and Wales.

Campaigners at the Suzy Lamplugh Trust has said there is a ‘clear link’ between stalking and homicide, as seen in the recent cases of Gracie Spinks (left) and Yasmin Chkaifi (right)

But a decade on, 21 campaigners and organisations who make up the National Stalking Consortium say police are failing to identify perpetrators, properly investigate crimes and implement appropriate protection for victims, ‘putting many at risk’.

They say it is common for stalking to be mischarged as different types of crime such as malicious communications, criminal damage or domestic abuse.

How has the law changed on stalking over the last decade?

Today marks 10 years since stalking became a specific crime in England and Wales.

The prime minister who oversaw the legal change was David Cameron, who at the time said stalking was an ‘abhorrent crime’ which makes life a ‘living hell’ for victims.

The change resulted in new powers for law enforcement bodies, as well as targeted training for those in the CPS and police.

Prior to this, victims relied on the Protection from Harassment Act 1997, which applied to all forms of harassment which ‘intended to cause distress or alarm’ where it happened more than once.

However, many people including stalking victims argued the legislation did not go far enough, and felt they were not being taken seriously by the criminal justice system.

After calls from campaigners and a parliamentary inquiry held at the time, stalking became a specific offence on November 25, 2012.

In 2017, the maximum prison sentence for stalking was increased from five to 10 years in prison.

One victim in her 50s, who MailOnline is not naming, was subjected to a four-year stalking campaign waged by an ex-employee who became fixated with her.

She said that despite her ‘horrendous’ ordeal, which saw the windows of her business smashed, tyres slashed and being sent endless threats of violence and suicide, ‘what is equally as bad is the handling of it by the police’.

The victim said that she was ‘gobsmacked’ to be told by an unnamed police force: ‘It’s freedom of speech, he can say what he likes’, despite having a SPO forbidding him referencing her on social media.

She added: ‘Another officer said, “I’m not being funny, but if I want somebody out of my life, I just block them”.’

After being told to encourage her stalker to attack her in order to get him arrested, the woman said she made a formal complaint and the officer was ‘spoken to’.

In another instance, the business owner claimed that she went to the police with ‘pages and pages’ of evidence to be told: ‘I haven’t got time to read all that’.

‘I had to highlight the evidence for them.’

Another victim, who endured a horrific 10-year stalking campaign by a stranger with whom she had a mutual acquaintance, said she had ‘more damage from dealing with the police than the years of stalking’.

The woman, who wished to remain anonymous, told MailOnline that she was ‘left in a black hole’ after being told by police she would have to ‘spend the next year or so’ collating her own evidence because there was not enough to pursue a case.

She said: ‘When I was told you are going to have to gather more evidence, I was left in a black hole, which is really scary when you’re starting to live your life with hyper vigilance.

‘It really started to affect my mental health.

Ex-ITV News and Channel 5 News presenter Isla Traquair, 42, was subjected to a six-month ‘campaign of vengeance’ by her obsessive neighbour, Jonathan Barrett, 54.

Earlier this week, Ms Traquair claimed police treated her ordeal as a ‘neighbourhood dispute’ and said she felt she was ‘gaslit’ and mocked by those in the court system.

She claims that one officer spoke to Barrett and told Traquair he found him and his partner to be ‘nice and polite’ and said he wouldn’t be her ‘go-between’, she told BBC’s Woman’s Hour.

Wiltshire Police later apologised to her and removed the officer from her case. 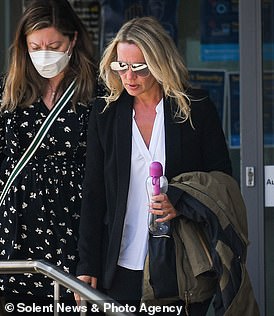 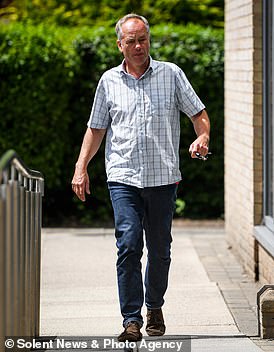 After Traquair fled her home and moved to the US, she learned that the CPS were dropping her case because it was not deemed a problem anymore.

She wrote to Wiltshire Police and the case was picked up again, eventually going to court. However, she was refused a request to give a statement by videolink, meaning she had to pay thousands of pounds to fly home.

Traquair then said she was mocked in court for being ‘articulate’.

She continued: ‘I was gaslit during the case, and half of the evidence wasn’t given to the barrister. She actually apologised after and said I had been badly let down.

‘I was gaslit for being articulate. The defence were saying “you’re a journalist, you’re good with words aren’t you?” He was criticising who I was as a person. I wasn’t a good victim.’

Barrett avoided jail but was convicted of stalking after a trial heard he stared through her windows, monitored what she ate before coming into her home with a sandwich, and even ‘chainsawed’ bamboo fencing she had put up to keep him out.

‘I asked them, “what do I do in the meantime?” They told me, “go to Maplin and buy yourself some security cameras”.

Throughout her time dealing with the police, the woman said she was made to feel like a ‘nuisance’ and when she did finally collate enough evidence officers told her: ‘What do you want me to do with this?’

‘Unless there was an assault they weren’t willing to engage,’ she said. ‘That was my biggest worry, what needs to happen for them to do something about it?’

The Suzy Lamplugh Trust said that only five per cent of reports of stalking made to the police in the last year resulted in a charge by the Crown Prosecution Service (CPS).

Violet Alvarez, senior policy and campaigns officer, said that in cases where stalking is identified, it is very common for police to erroneously drop cases, putting it down to a lack of evidence.

‘There is also a clear link to homicide in stalking cases which is not being recognised,’ she said.

‘This can have catastrophic consequences, seen in the recent cases of Gracie Spinks and Yasmin Chkaifi.’

In June last year, 23-year-old Gracie Spinks was fatally stabbed. The body of her suspected killer, colleague Michael Sellers, was found half a mile away in Derbyshire.

It is believed he had become obsessed with her in the months before her death.

She had reported Sellers to Derbyshire Police four months before her killing. Five officers involved are now set to face misconduct proceedings.

Gracie’s death saw an outpouring of grief, resulting in a petition calling for better protection for stalking victims.

The petition, which received more than 100,000 signatures, the number needed to be debated in Parliament, called for police forces to allocate specific funding to help victims, who hoped this could improve how stalkers are dealt with.

But in January this year, Yasmin Chkaifi, 43, was stabbed to death by her stalker ex-husband Leon McCaskie, 41, on a west London street before being mowed down by a driver who witnessed the attack.

Prior to her death she confided in a friend he was spying on her, having ‘stolen my mail, my phone’ and gaining ‘access to all my personal data’.

Chillingly, she said: ‘I think he will kill me.’

The IOPC launched an investigation into contact Ms Chkaifi had with officers prior to her death.

Ms Alvarez continued: ‘Recently, the IOPC found that  police failings materially contributed to the murders of Raneem Oudeh and her mother, Khaola Saleem in 2018.

‘They were stabbed to death by Raneem’s ex-husband following repeated calls to police asking for help.

‘It’s clear that something needs to change.

‘That’s why we have submitted a super-complaint against the police, which we hope will trigger a thorough investigation into the police response to stalking, and put forward recommendations such as mandatory training on stalking for all police officers.’

National Police Chiefs’ Council lead for stalking and harassment, Deputy Chief Constable Paul Mills, said: ‘Harassment and stalking are serious crimes which can have a devastating effect on the lives of victims and their friends and family.

‘Stalking is a crime which goes to the very heart of violence against women and girls, removing their feeling of safety.

‘It is recognised there is more to do to improve the criminal justice system outcomes for victims of stalking and we are working closely with the CPS to understand the progression of cases before the point of charge and court.’

Crypto Loans vs Personal Loans: Which Should You Choose?
Technology