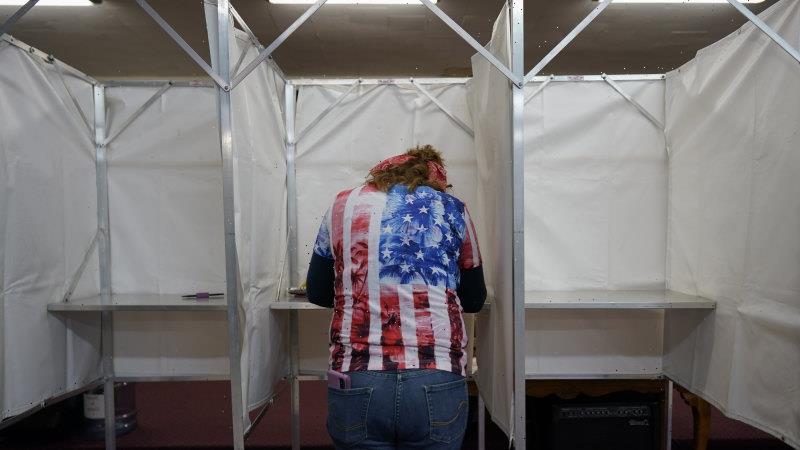 Washington: Among the myriad offices gaining attention on the ballot on Tuesday in the US (Wednesday AEDT), the normally obscure post of secretary of state stands out.

In most states, that position is the top election official who oversees the state’s voting system. In some of the nation’s pivotal swing states, Republicans have nominated candidates for that office who supported overturning the 2020 presidential election to keep Donald Trump in the White House. 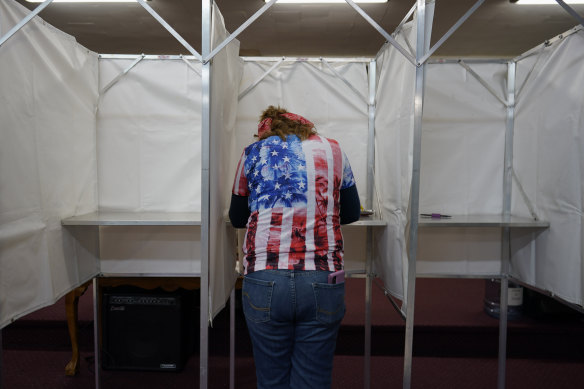 Loretta Myers fills out her ballot at her polling place, the New LIFE Worship Centre Church of God, in Fayetteville, Pennsylvania.Credit:AP

All told, half of the 22 Republicans running for secretary of state positions that oversee elections have repeated Trump’s election lies, and seven of them supported his attempts to overturn the will of the people and remain in power in 2020.

“If they win, we’re going to have someone who’s run on a platform of election denial, saying, ‘Actually, elections are only legitimate when my candidate wins,’” said David Becker, executive director of The Centre for Election Innovation & Research and co-author of The Big Truth, a book warning of the dangers of Trump’s election lies.

In Arizona, state Representative Mark Finchem, who attended Trump’s January 6, 2021, rally that preceded the deadly assault on the US Capitol, is running for secretary of state after saying he wouldn’t have certified Democrat Joe Biden’s 2020 win in that state.

The GOP nominee in Nevada, Jim Marchant, made the same promise. In New Mexico, Republican secretary of state challenger Audrey Trujillo cheered on a failed appeal to the US Supreme Court in 2020 to overturn Biden’s win.

And in perennial swing state Michigan, Republican Kristina Karamo insists Biden didn’t actually win her state, even though he did — by more than 154,000 votes.

The candidacies from election conspiracists have triggered an avalanche of spending in the contests, predominantly by Democrats and their allies. They have bombarded the races with millions of dollars in ads pleading for voters to think carefully before entrusting such candidates with the job of running elections.

There are a bevy of other election conspiracy theorists almost guaranteed to win in less competitive states Tuesday night.

In Wyoming, state Representative Chuck Gray is running unopposed. After he won the GOP primary, the state’s election director resigned and the GOP-controlled state legislature mulled taking election administration away from the office but balked.

In Alabama, state Representative Wes Allen, the GOP nominee in the solidly conservative state, backed a lawsuit to overturn Biden’s win that was thrown out by the US Supreme Court.

In some states, the secretary of state doesn’t oversee elections. In others, like Pennsylvania, the governor appoints the secretary of state to oversee voting. There, Republican nominee Doug Mastriano arranged for buses to transport people to Trump’s January 6 rally and has promised to appoint someone who will wipe clean the state’s voter rolls, forcing the state’s roughly 8.8 million voters to re-register.

In Wisconsin, the state’s bipartisan elections commissions oversees elections, but some Republicans want to change that.

The state’s Democratic governor, Tony Evers, has blocked bills from the GOP-controlled legislature trying to wrest control of voting away from the commission.

Evers is facing Republican Tim Michels, a businessman backed by Trump who has his own plan for making the commission friendlier to Republicans.

Many Republican incumbents, in contrast, rebuffed Trump’s efforts to overturn the 2020 election and won primaries against those who questioned that contest.

The most prominent example is in Georgia, where Secretary of State Brad Raffensperger rejected Trump’s private entreaties to “find” enough votes to declare him winner of the state Biden actually won.

China’s shift means that inflation is here to stay