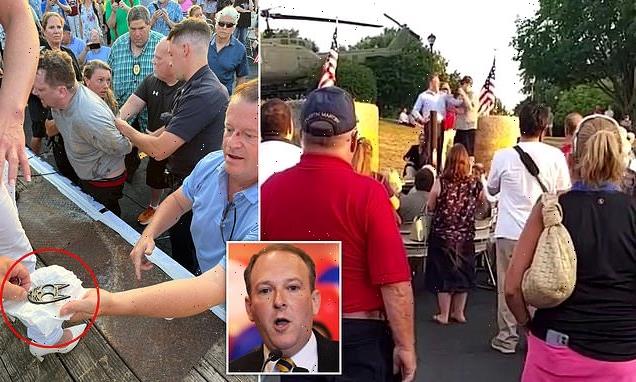 The Republican was in the midst of a speech at VFW location about bail reform as part of his ‘United to Fire Hochul’ campaign when he was confronted.

Video from the scene shows the suspect enter the stage from slightly behind Zeldin, walk calmly up to him and eventually raise up his arm towards the candidate’s upper body.

A group of Zeldin supporters quickly subdued the attacker. In a tweet, Zeldin said: ‘Someone tried to stab me on stage during this evening’s rally, but fortunately, I was able to grab his wrist and stop him for a few moments until others tackled him.’

A weapon, appearing to looking like a sharp pair of brass knuckles, was recovered from the scene. The weapon featured a cat’s face with the words: ‘Made in the USA’ written across it.

The candidate was not wounded in the incident and returned to the stage after the suspect was arrested by the Monroe County Sheriff’s Department.

Prior to his arrest, Zeldin supporters are said to have held the attacker in place with zip-ties.

The suspect reportedly said words to the effect of: ‘Okay, you’re done,’ prior to launching his attack, according to WHEC. 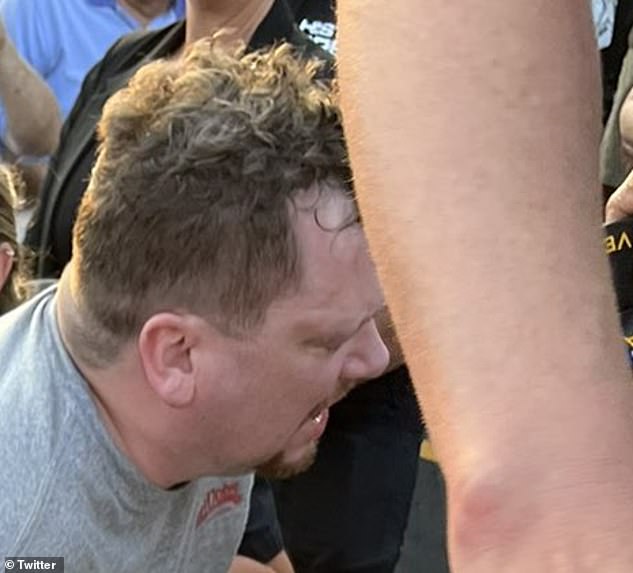 The suspect being taken into custody by the Monroe County Sheriff’s Department. No charges have been announced 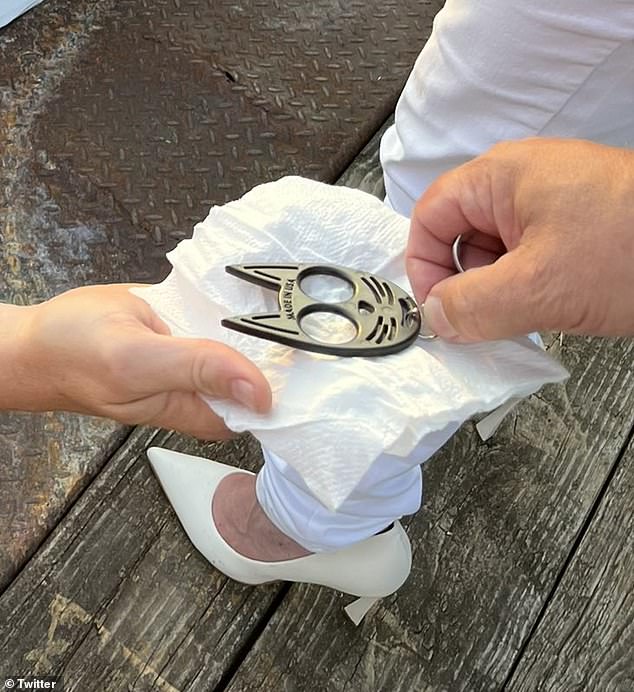 The suspect’s apparent weapon being handed over to authorities 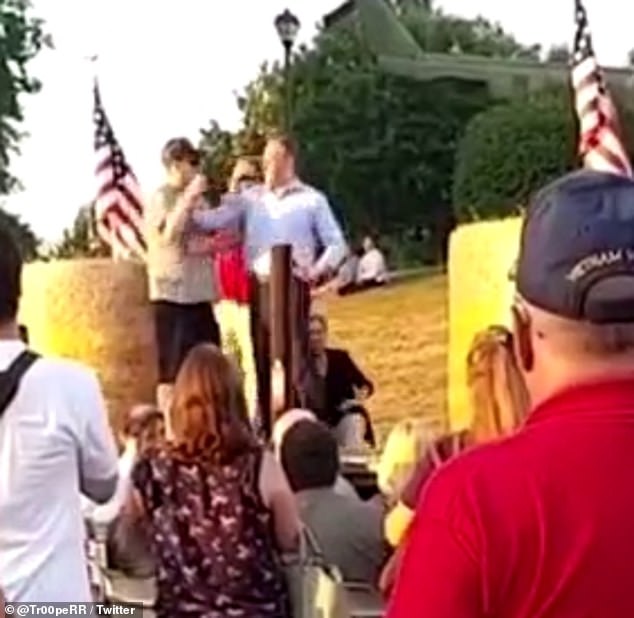 The suspect seen entering the stage while Zeldin was in the midst of speech. He can be heard saying words to the effect of ‘You’re done’ 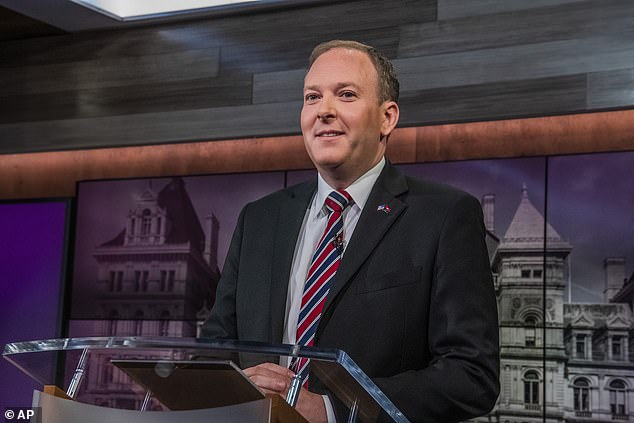 Zeldin appears during New York’s Republican gubernatorial debate at the studios of Spectrum News NY1 on June 20, 2022, in New York

He has been an opponent of New York’s bail reform laws, eliminating cash bail for nonviolent and misdemeanor charges.

His campaign said in a statement on Thursday: ‘Congressman Zeldin, Alison Esposito and all members of Team Zeldin are safe following tonight’s attack. Far more must be done to make New York safe again. This is very much getting out of hand in this state.

The message continued: ‘Unfortunately, Congressman Zeldin is just the latest New Yorker whose life has been affected by the out of control crime and violence in New York. This needs to stop!’ 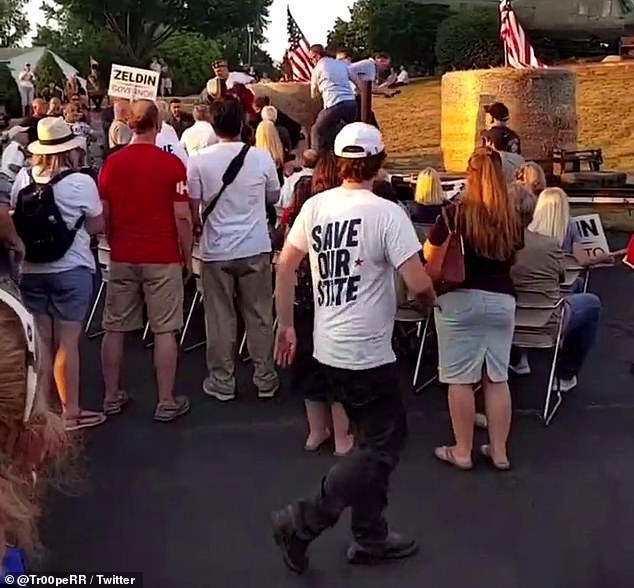 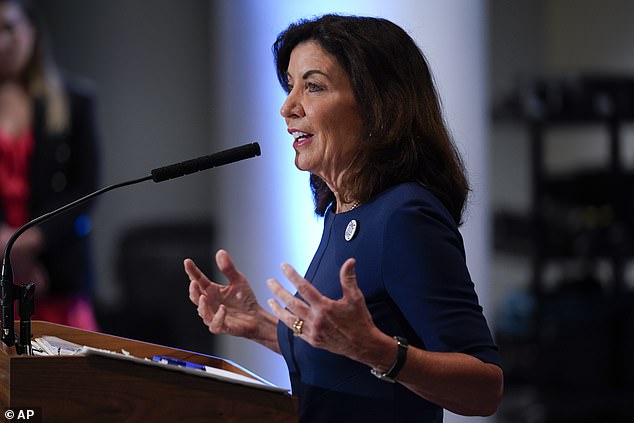 Gov. Hochul speaking at an event on the night that Zeldin was attacked in New York City where she was advocating for the city to host the 2024 Democratic National Convention

Following the attack, New York GOP Chairman Nick Langworthy blamed the current governor for the attack saying: ‘It’s not a coincidence that just hours earlier, Kathy Hochul fanned the flames of hate by directing her supporters to his rally schedule. This is unacceptable conduct for anyone, let alone a sitting governor.’

On her campaign website, Hochul’s team pointed out Zeldin’s event on July 21 telling her supporters: ‘RSVP to hear about Zeldin’s ‘Election Integrity Task Force,’ and his recent election fraud scandal in which his campaign photocopied over 11,000 duplicate signatures.’

A week before the attack, the congressman was taken off of the Independent Party’s ballot line in November’s gubernatorial election after more than 12,500 of the signatures on his application were found to have been duplicates of real signatures.

Following Thursday’s incident, Governor Hochul said: ‘Relieved to hear that Congressman Zeldin was not injured and that the suspect is in custody. I condemn this violent behavior in the strongest terms possible — it has no place in New York.’ 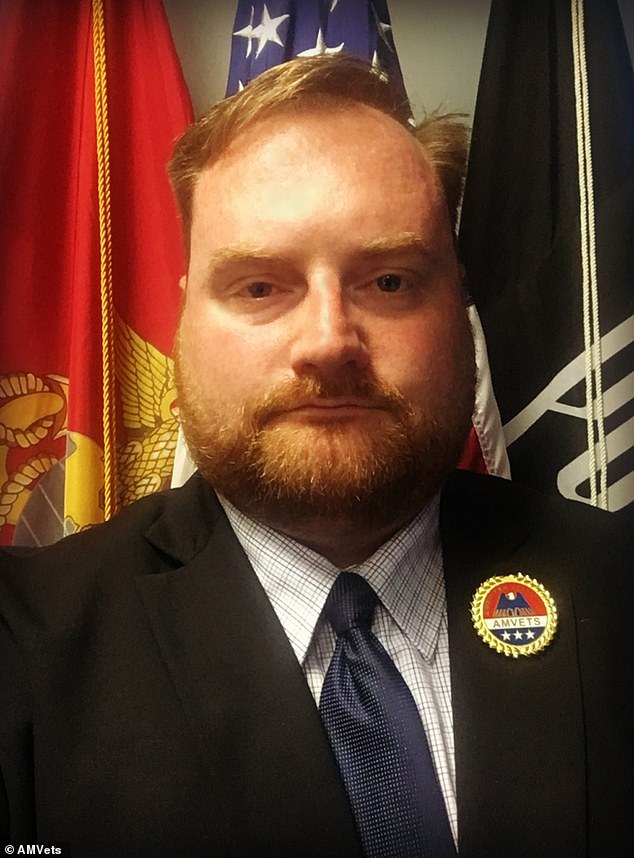 According to his LinkedIn page, Joe Chenelly, the man who took down the attacker, is a candidate for the New York assembly in 2022

According to his LinkedIn page, the man who first took down the would-be attacker, Joe Chenelly, is a candidate for the New York state assembly in 2022.

Chenelly is a long time advocate for veterans and has worked as a political advisor for former United States Senator Jim Webb’s short-lived campaign for the presidency in 2016.

Following Thursday’s incident, his wife wrote on Facebook: ‘Joe Chenelly is a hero.’

New York City Councilwoman Joann Ariola quickly condemned the attack in a statement saying: ‘Attacks on political candidates, regardless of their viewpoints, are absolutely unacceptable.’

She continued: ‘This country was founded on the idea of freedom of speech. Political violence of this kind represents a dangerous shift away from the principles that this nation was built upon.’

What Does Today’s US Inflation Data Mean for Crypto Markets?