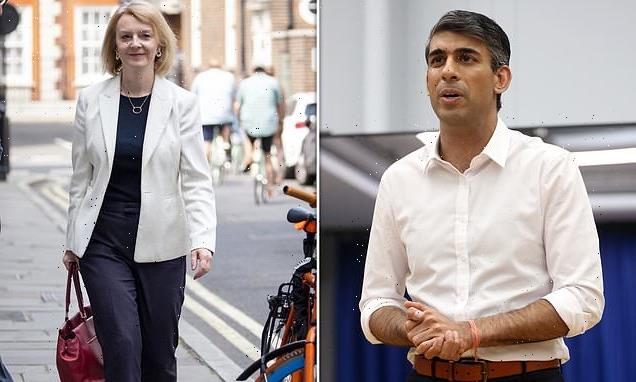 Rishi Sunak under fire over Covid fraud: Ex-Chancellor is hammered by senior Tories for allowing billions of pounds to be lost in fraud and error from Covid schemes

Rishi Sunak has been hammered by senior Tories for allowing the Treasury to lose billions of pounds in fraud and error from Covid schemes, The Mail+ can reveal.

The former chancellor has been forced to defend his pandemic record just as he attempts to portray himself as the careful steward of the public’s finances.

His critics are determined to make his handling of the crisis a key issue in the leadership battle as 160,000 Conservative members prepare to vote on whether they want Mr Sunak or the Foreign Secretary Liz Truss to replace Boris Johnson.

Mr Sunak this week told interviewers it was ‘reasonable’ for taxes to rise ‘because everyone knows we’ve spent a fortune during Covid’.

But leading Tories labelled his ‘spray and pay’ approach to Covid handouts ‘shamefully negligent’, and accused Mr Sunak of ‘talking a good game, which is not matched by delivery’.

They said it was ‘staggering’ that he is raising taxes to the highest levels since the 1940s to pay for pandemic costs. 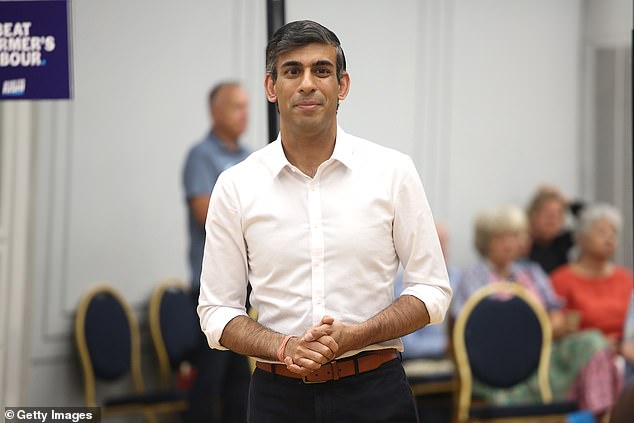 Rishi Sunak has been hammered by senior Tories for allowing the Treasury to lose billions of pounds in fraud and error from Covid schemes, The Mail+ can reveal

It comes after experts said last night that Ms Truss’s fiscal plans for after entering No10 would cost the Treasury £30billion, but she has insisted they will not impact public spending.

Mr Sunak did not pull any punches in an interview last night. Speaking to LBC he warned that the shortfall would have to come from ‘inflationary’ increased borrowing.

He said that going on a ‘huge borrowing spree’ would only ‘make the situation worse’.

But Tory sources suggested he would have to offer members something, after a new poll found that Ms Truss had increased her lead among the Conservative faithful.

The Foreign Secretary was the choice of 62 per cent of the membership polled by YouGov for Sky News, against 38 per cent for the ex-chancellor.

They will tour the UK over the next six weeks to take part in 12 hustings for the Tory members who will vote for their next leader, with the result being announced on September 5.

A former advisor told Politico: ‘He needs to throw something to the right and the finance bods who think Liz is right.’

In contrast to Ms Truss’s lead among members, a second poll found Mr Sunak is more likely to win a general election, something he seized on.

Sunak supporter Robert Halfon, the Education Committee chairman, said: ‘You can’t just have unfunded tax cuts because you have to deal with the debt. 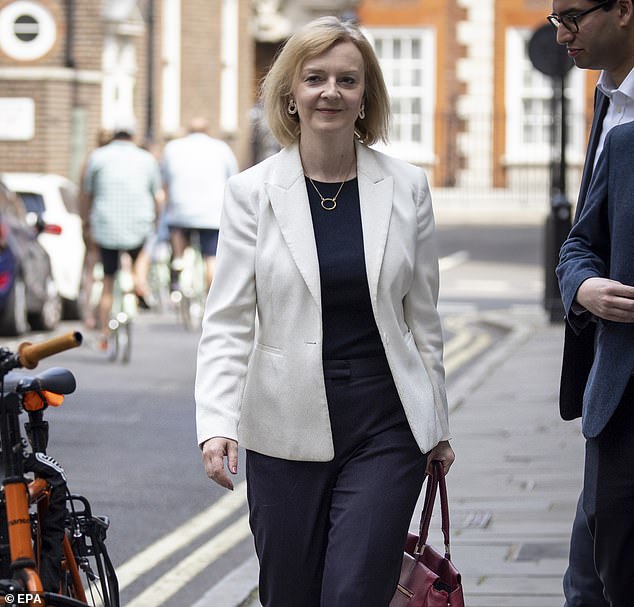 Experts said last night that Ms Truss’s fiscal plans for after entering No10 would cost the Treasury £30billion, but she has insisted they will not impact public spending 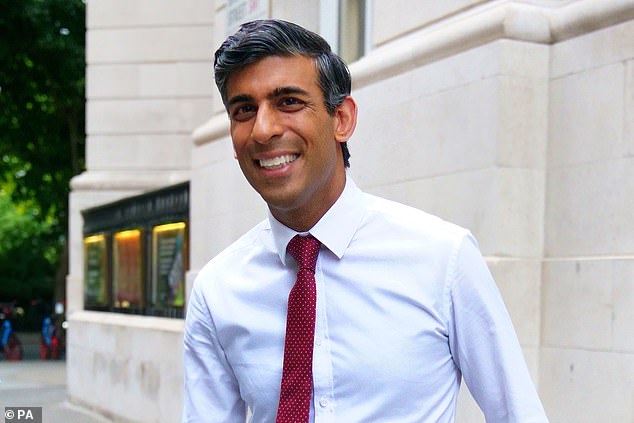 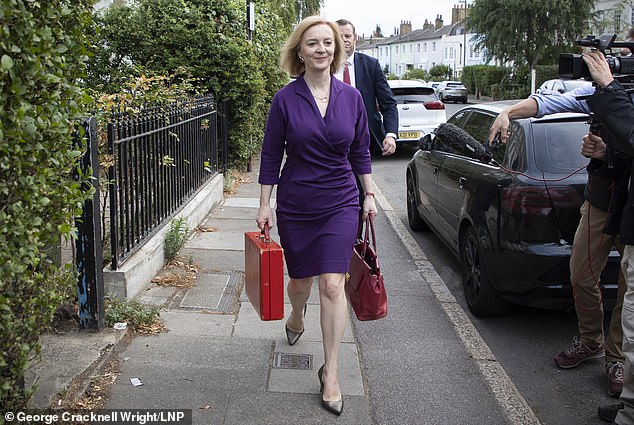 Experts last night said the Foreign Secretary’s fiscal plans for after entering No10 would cost the Treasury £30billion, but she has insisted they will not impact public spending 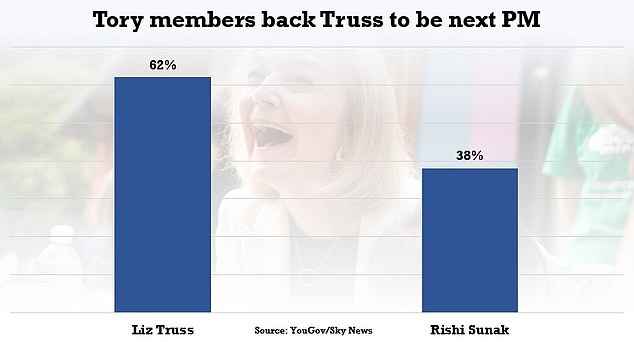 The Foreign Secretary was the choice of 62 per cent of the membership polled by YouGov for Sky News, against 38 per cent for the ex-chancellor

The cost of Liz Truss

Experts have suggested that Liz Truss’s plans to take an axe to taxes if she wins power would cost the Treasury at least £30billion per year.

The Institute for Fiscal Studies said that Tory members would face a ‘genuine choice’ between her plans and those of Mr Sunak, whose fiscal position is broadly that of the current Government.

In an analysis, the IFS’s Robert Joyce noted that cancelling a planned rise in corporation tax from 19 to 25 per cent would cost £17billion, though some might be clawed back in higher tax income generally if it stimulates economic growth.

However he also points out that Mr Sunak’s plans leave the UK with ‘tax heading towards its highest sustained level in 70 years as a share of national income’.

The IFS noted: ‘This boosts incomes across the board, but does so most for higher-income households who have the most income from employment.’

‘We have to spend money on the public services, whether it be the NHS, education and many other areas in public life and if we’re again to have a proper education service that needs to be properly resourced.

‘If you just have unfunded tax cuts, where is that money going to be for vital public services?’

Figures this week showed government borrowing in June at the second-highest level ever, as interest on the £2.4trillion debt mountain hit an eye-watering new record.

The UK racked up another £22.9billion borrowing in June, the second highest on record, and driven mainly by an incredible £19.4billion for servicing debt.

That was more than double the same month last year, and a peak since records began in 1997. It is just under half annual defence spending.

Large portions of the government’s debt stocks are linked to RPI inflation which has been soaring even higher than the headline CPI rate.

The independent OBR watchdog has predicted that interest payments will be £87billion this financial year.

However, the grim data will raise questions about how tax cuts being pledged in the Conservative leadership battle could be achieved.

Mr Sunak last night told Tonight With Andrew Marr on LBC: ‘If you look at all the polling evidence that we have, and you see what that says, it’s pretty clear that I am the person that is best placed to defeat Keir Starmer in the next election.’

Asked if that meant the Conservative Party would likely be defeated in the next election if Ms Truss became leader, he replied: ‘That’s what all the evidence that we have today would show, and that’s what our members will need to consider.’

Earlier, Ms Truss defended her tax cut plans as ‘affordable’, as the economic policies of the two candidates came under scrutiny.

‘What is not affordable is putting up taxes, choking off growth, and ending up in a much worse position,’ she told broadcasters during a visit to Peterborough.

Mr Sunak was understood not to be envisaging cutting personal taxes until at least autumn next year to avoid fuelling inflation.

But Ms Truss promised an emergency budget to reverse the national insurance hike immediately under her proposals to drive growth.

The financial plans of the final candidates for prime minister were growing more divided as they battled for the votes of the Tory membership required to win the race for No 10.

The plans ‘mean higher borrowing or less public spending, or some combination’, he said, though their impact remains unclear because Ms Truss’s proposals are ‘yet to be fleshed out’.

‘Without spending reductions, the tax promises would likely lead to the current fiscal rules being broken, and Ms Truss has hinted that the fiscal rules may change,’ Mr Joyce added.

She told reporters in Peterborough: ‘What I am planning is public service reforms to get more money to the front line, to cut out a lot of the bureaucracy that people face…

Asked on LBC ‘what would be the effect on inflation of borrowing £30 billion for unfunded tax cuts’, Mr Sunak said: ‘I think it would be inflationary.’

He added: ‘I’m worried about the inflation that we’ve got at the moment becoming embedded and lasting far longer.

‘That’s going to be so damaging for everyone listening because it’s going to erode all the savings that they’ve worked really hard to build up.

‘It’s going to push up their mortgage rates if interest rates have to go up very high to deal with (it).’

In his pitch to Conservative members after MPs selected the final two candidates, Mr Sunak argued that only he is capable of beating Labour in a general election.

But Ms Truss hit back by saying the Tories would struggle to win under the current economic policy written by Mr Sunak when he was in No 11.

‘I think it would damage trust, because part of rebuilding trust is for the Government and politicians to deliver the things that they say, and sitting here promising you a bunch of things that I don’t think are right or deliverable would be wrong,’ he said.

But bookmakers placed the Foreign Secretary as the frontrunner, with early indications suggesting she is more popular with Tory members ahead of a summer of campaigning.

Writing in The Daily Telegraph, former Brexit Minister Lord Frost again offered his support to Ms Truss, arguing that Britain cannot ‘tax our way out of deficit and debt’.

He added: ‘We need to grow the size of the cake and end the poisonous politics of interest groups and identity politics, which sets one group against another.

‘The only way out of this trap is to focus ruthlessly on increasing the productive capacity of our own economy. That will need the kind of measures that Liz Truss is setting out.’

Bit Degree Founder on the Future of Crypto