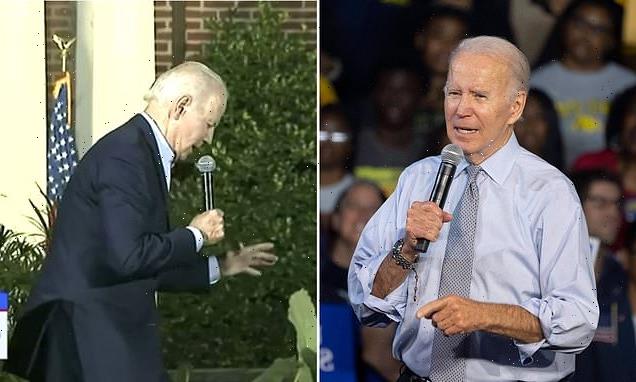 ‘I no more feel it than I can get out behind this desk and fly!’ Bumbling Biden’s bizarre claim he’s ‘still fit for office’ as he shrugs off EIGHTIETH birthday later this month (and nearly falls off stage in New York)

President Joe Biden, 79, dodged questions about his 80th birthday and fitness for office Sunday while making final pushes ahead of the midterms.

During an appearance on the Willie Moore Jr. Show, Biden downplayed his age, saying that he ‘can’t even say that number,’ meaning 80.

His deflection came just hours after he almost fell off the stage at a New York rally for Gov. Kathy Hochul.

Biden said in the interview, recorded Sunday but released on Monday, that he still feels like he is 50, rather than the significantly higher number that he actually is. 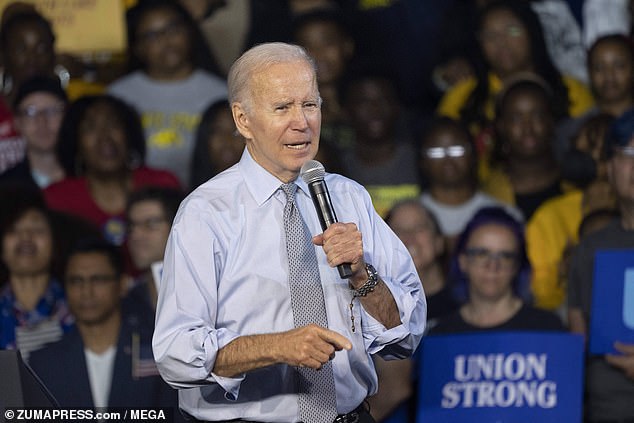 President Joe Biden, 79, has been deflecting questions regarding his age and fitness for office in recent weeks

He continued, saying that the upcoming milestone feels as surreal as him being able to fly.

‘I no more feel that than I get out of this — out behind this desk and fly,’ he said, seemingly attempting to express his disbelief at his 80th birthday.

At the time of his inauguration in 2021, Biden was already the oldest elected president at 78.

Despite his age, he has repeatedly doubled down on his intentions about running for a second-term in 2024.

‘There’s so much we can do, and we’re just getting started,’ Biden said.

In another call Monday, Biden referenced a potential second term, as well. It appears he may have been attempting to mention the second half of the first term, however.

‘Look, if we’re able to hold on, we’re going to be in incredible shape. Imagine what we can do in the second term if we gain control — and we maintain control,’ he said.

Just hours before his statements made on the radio, Biden had an almost catastrophic fall during a rally with Gov. Hochul in Yonkers.

‘I know I don’t look it, but I’ve been around for a little while,’ Biden joked to the crowd gathered at private liberal arts university Sarah Lawrence College. 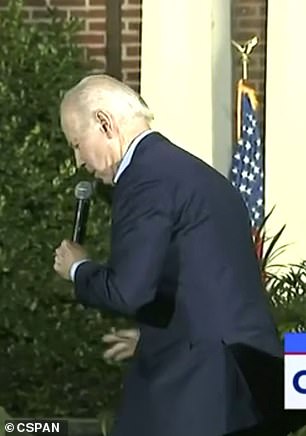 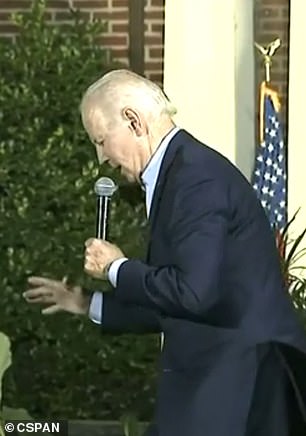 Biden had to catch himself at one point during the rally as he tripped over something on stage and almost fell.

Several weeks ago, Biden himself commented on voters’ concerns regarding his age.

The president said that its ‘totally legitimate’ for Americans to question his fitness for office and a second term.

‘I think it’s a legitimate thing to be concerned about anyone’s age, including mine. I think that’s totally legitimate,’ the president said.

‘I think the best way to make the judgment is to watch me. Am I slowing up? Am I going at the same pace’ he said just weeks ago. 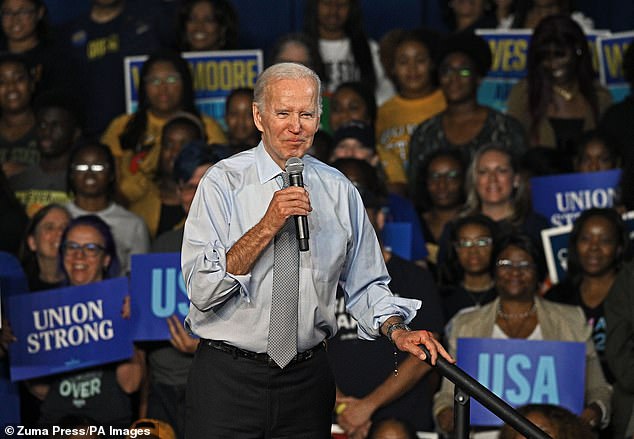 Biden has yet to formally declare candidacy for a second term.

‘I can’t even say the age that I’m gonna be. I can’t even get it out of my mouth,’ Biden told MSNBC.

‘I’m in good health. All of my, everything physically about me is still functioning well and mentally too. So you know, I understand that people wanted to ask that question.’ 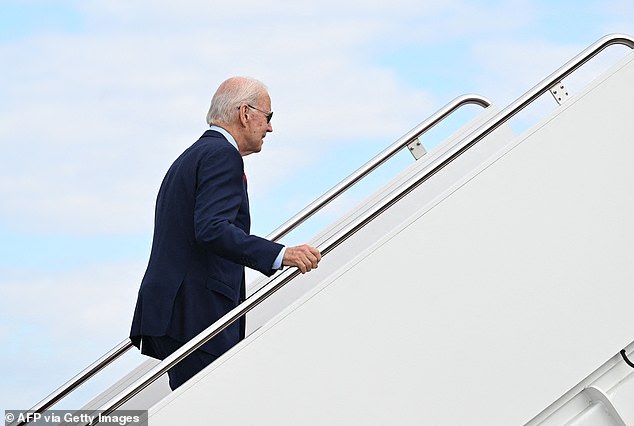 Just last week, Biden said that his son Beau Biden died in Iraq, while catching himself calling the war in Ukraine the Iraq war, while delivering remarks in Fort Lauderdale

Another blow for the president came in the form of an op-ed published in the Washington Post last week, calling for President Biden and Vice President Kamala Harris to bow out of the 2024 race for ‘the sake of the country.’

Columnist George F. Will pointed to a slew of Biden’s gaffes and verbal blunders as reason enough for why ‘Joe Biden should not seek another term.’

‘Democrats should promptly face that fact, and this one: An Everest of evidence shows that Vice President Harris is starkly unqualified to be considered as his successor.’

That op-ed piece comes just a day after Biden fumbled his words during a campaign stop in Florida where he confused the American war in Iraq and the Russian war in Ukraine – then flubbed again by saying son Beau died in the Iraq war when, in fact, he died in 2015 of brain cancer.

The op-ed piece first addressed one of Biden’s gaffes that Will believed slipped by unnoticed.

Will wrote that Biden did not sign the $426 billion student loan forgiveness into law like the president had recently claimed.

In August, Biden announced that he had decided to cancel up to $10,000 in student loan debt for people making less than $125,000 annually, or as much as $20,000 for individuals in the same income bracket who were also Pell Grant recipients.

However, a federal appeals court has temporarily blocked Biden’s plan, creating uncertainty for millions of borrowers. But for now, the website is live and accepting applications.

But in the op-ed piece on Wednesday, Will pushed home his point that the loan forgiveness was not something accomplished by ‘a law’ Biden had signed.

‘Biden was not merely again embellishing his achievements. This is not just another of his verbal fender benders,’ he wrote. ‘There is no less-than-dismaying explanation for his complete confusion. What vote? Who voted?’

He continued: ‘After repeated unilateral extensions of the moratorium on loan repayments until election season, Biden unilaterally implemented the windfall for millions of voters. Congress was not involved in this cataract of money from the Treasury, in violation of the Constitution’s appropriations clause.’ 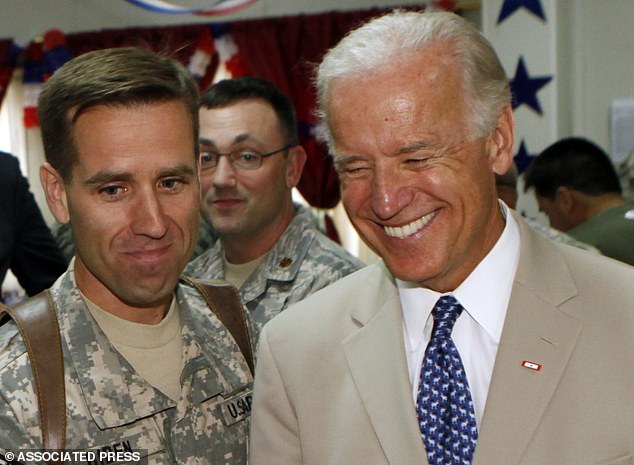 Beau Biden (left) died of brain cancer in 2015 after serving in Iraq. He’s photographed with then Vice President Joe Biden (right) in 2009 at Camp Victory on the outskirts of Baghdad

‘It is frightening that Biden does not know, or remember, what he recently did regarding an immensely important policy,’ he wrote. ‘He must be presumed susceptible to future episodes of similar bewilderment. He should leave the public stage on Jan. 20, 2025.’

Last Tuesday, Biden again said that his son Beau Biden died in Iraq, while catching himself calling the war in Ukraine the Iraq war, while delivering remarks in Fort Lauderdale, Florida.

‘Inflation is a worldwide problem right now,’ the president said. ‘There’s a war in Iraq and the impact on oil and what Russia’s doing. Excuse me, the war in Ukraine.’

‘I’m thinking Iraq, because that’s where my son died – because he died,’ Biden then explained.

Beau Biden, who served as Delaware’s attorney general and in the Delaware Army National Guard in the Iraq War, died at age 46 in 2015 from brain cancer at the Walter Reed National Military Medical Center in Bethesda, Maryland.

China will focus on preparing for WAR, Xi Jinping declares