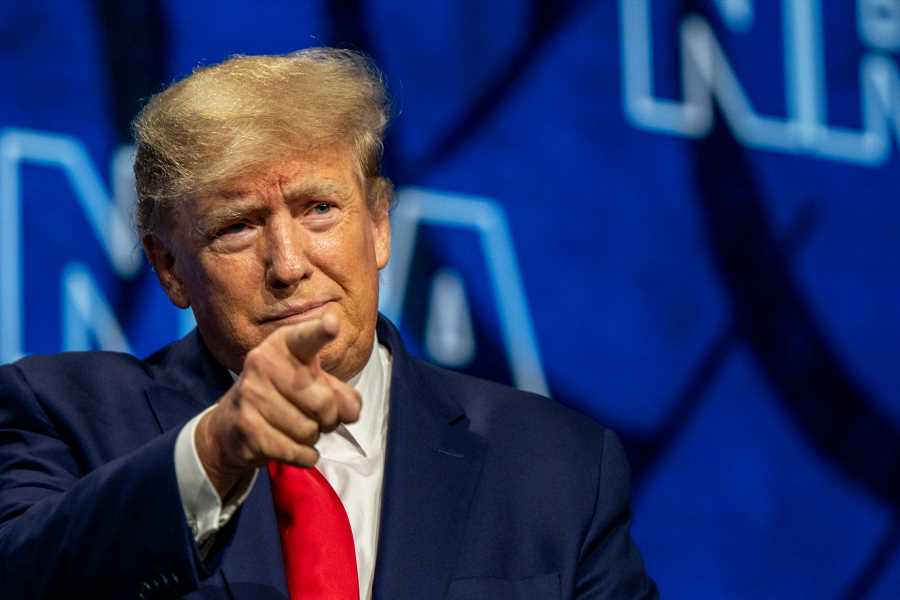 In his year and a half in exile, former President Donald Trump has been sketching out his possible return to power, filling his time with authoritarian revenge fantasies and several ideas for government personnel that sound like they sprang directly from a Fox News control room.

Since last year, the twice-impeached former president has — two sources familiar with the matter say — made a habit out of asking golfing buddies and certain confidants about which hardcore Trump sycophants he should appoint to his new Cabinet, White House counsel’s office, the Department of Justice, and elsewhere in the government. This is, of course, contingent on him actually launching a bid, securing the GOP presidential nomination, and then winning in the general election.

The 8 Biggest Revelations From the Jan. 6 Hearing on What Trump Did During the Capitol Attack

Trump Ignored a Call From the Pentagon During Jan. 6 Capitol Attack as He Kept Trying to Steal the Election

According to the sources, one name Trump has kicked around in private conversations at least a few times since leaving office is none other than Lou Dobbs, the one-time Fox Business star who has informally advised Trump for years. The former president loves Dobbs so much that he’d even put him on speakerphone in the Oval Office while members of his senior staff and Cabinet were convened there to have sensitive discussions on policy and messaging. Sometimes, he’d cut off senior government personnel mid-sentence so that he could tell “Lou” to interject.

It is unclear what possible job, exactly, Trump had in mind for Dobbs, but one of the sources familiar with the matter says they recalled the ex-president floating Dobbs for a Cabinet appointment or a senior White House post. Beyond being a staunch supporter of Trump and his immigration crackdowns, Dobbs ended his longtime career at Fox Business as a prominent spreader of Trump’s  lies about a “stolen” 2020 election.

More alarmingly, Trump and various allies and associates have been actively planning to reform the federal government in his own image if he wins in 2024 — including by purging thousands of federal employees and replacing them with “America First” loyalists, according to a new report from Axios.

Sources close to Trump tell Axios that the former president’s allies are working on plans to “potentially strip layers at the Justice Department — including the FBI, and reaching into national security, intelligence, the State Department and the Pentagon ” should Trump retake the presidency.

The plans, with Trump’s “blessing,” have been quietly developed for months, and could “accelerate controversial policy and enforcement changes, but also enable revenge tours against real or perceived enemies, and potentially insulate the president and allies from investigation or prosecution,” according to Axios.

The organizations preparing for this move work closely with prominent names from the Trump administration, many of whom expect to be rewarded with powerful positions in return for their loyalty to the former president. These include former Chief of Staff Mark Meadows, former DOJ official Jeffrey Clark, and former Trump adviser Stephen Miller. Other individuals being considered for positions in a second Trump administration include Dan Scavino, John McEntee, Richard Grenell, Kash Patel, John Ratcliffe, Peter Navarro, and Pam Bondi.

Axios previously reported that Ginni Thomas, the wife of Supreme Court Justice Clarence Thomas, has curated employment “hit lists” of government officials perceived to be disloyal to Trump and offered suggestions on their replacements. One of these suggestions includes installing right-wing radio host Dan Bongino in a counterterrorism role or in the Department of Homeland Security.

Sources tell Axios that cleaning house within the security agencies is “a matter of top priority.” The former president has expressed a desire to oust “woke generals” and completely reshape the Department of Defense, Justice Department, FBI, and CIA by installing loyalists.

The plan was allegedly molded around “Schedule F,” an executive order signed by Trump days before the 2020 election (and immediately repealed by President Joe Biden) that created a new “F” class of federal employees who would no longer have the employment protections guaranteed to most civil servants. The move would have allowed the Trump administration to easily fire and replace thousands of policy makers across federal agencies. An estimate from a Trump official calculated that “Schedule F” could apply to upwards of 50,000 federal employees.

Sources indicate to Axios that groups are already providing lists of potential targets “selected often for their animus against the system,” and developing separate lists vetting possible replacements.

On average, a new president replaces around 4,000 federal employees when they assume office, and most civil servants enjoy strong job protections as a safeguard against changing political tides and interruption of the day to day work of the federal government. Reimplementing “Schedule F” move could potentially rewrite the structure of the federal bureaucracy, and set a precedent that gives the executive widespread control of federal agencies that changes with every administration.

Trump’s pre-campaign activities have already become the subject of legal scrutiny. On Wednesday, the group American Bridge PAC filed a complaint with the FEC, demanding it hold Trump to the financial transparency standards required of presidential candidates. The group alleges that Trump violated the Federal Election Campaign Act “by making expenditures to advance his 2024 presidential campaign without filing a statement of candidacy with the FEC or disclosing those expenditures, and by accepting excessive contributions from his leadership PAC and a joint fundraising committee.”

It was reported earlier this month that Trump is considering announcing his 2024 candidacy by the end of the year, and possibly before the November midterms.

SEC Says These 9 Cryptocurrencies That Coinbase Currently Offers Are Securities