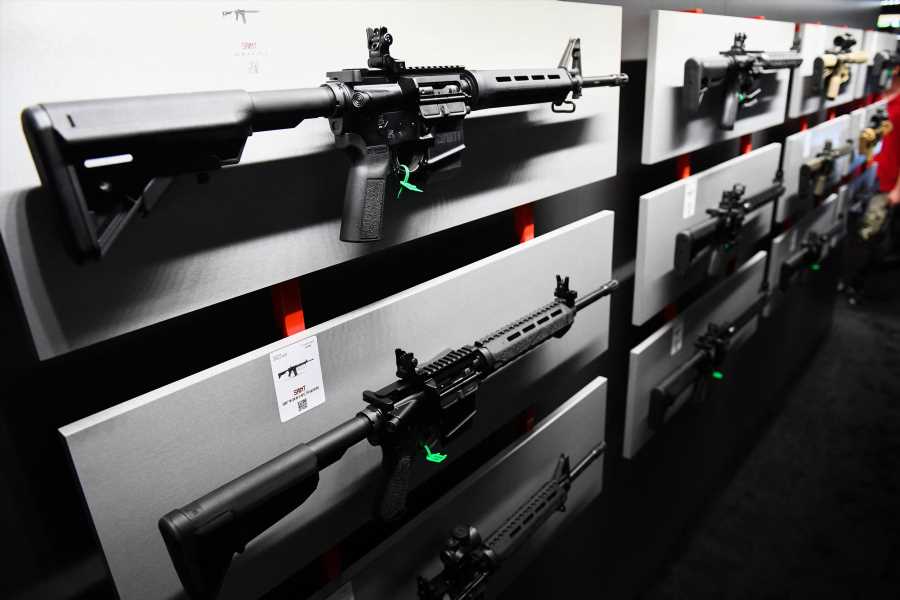 Hellfire: The Uvalde Shooter Owned a Device That Makes AR-15s Even More Deadly

The advertisement is slugged: “Unleashing ‘Hell-Fire.’”

It pictures a gunman, wearing a skull mask with blacked out eyes, who unloads an AR-15 that is sending spent cartridges flying from its ejection port. The ad copy reads: “All you do is squeeze the trigger and shoot at rates up to 900 rpm” — or rounds per minute.

The sales pitch is for a hellfire trigger device, a gun accessory that allows a semi-automatic rifle to fire at rates similar to machine gun. Although the physics behind the device are nearly identical to that of a bump-stock — now illegal under federal law — hellfires remain cheap and easy to acquire. Including, evidently, by a teenager bent on mass murder.

The gunman in the Uvalde massacre had purchased a hellfire device, which was recovered from one of the classrooms where the massacre took place, according to investigative documents reviewed by the New York Times. Federal authorities reportedly don’t believe the device was used in the attack. But had it been deployed, the carnage at Robb Elementary School — where 19 children and two teachers were murdered — might have been, unimaginably, worse.

Even in the trigger-happy US of A, machine guns are supposed to be illegal. A central fixture of federal firearms law since the days of Al Capone’s 1930s is that fully-automatic weapons are too powerful to be in civilian hands. Yes, modern consumers can buy high-powered weapons, like AR-15-style rifles, that are nearly identical to guns used in the U.S. military, but these guns fire only one round with each trigger pull.

But in the poorly regulated market of fire-arms accessories, a small but dedicated band of companies have pushed the legal envelope. They’ve engineered and marketed devices that circumvent the limitations of semi-automatic weapons, turning rifles into bullet hoses that can fire hundreds of rounds per minute.

After a 2017 massacre in Las Vegas, the Bureau of Alcohol, Tobacco and Firearms — better known as ATF — outlawed one class of these accessories, known as bump stocks, by classifying them as machine guns. But they didn’t touch hellfire triggers.

That differential treatment has no logic, insists Josh Sugarmann, Executive Director of the Violence Policy Center. When it comes to hellfires and similar “trigger activators,” he says, “ATF has been very, very lenient in its interpretation of federal law.”

Screenshot of an ad for a Hellfire style device

“Bump firing without the stock”

ATF itself recognized the similarity of the devices, explicitly comparing them in 2013 correspondence with a congressman, back when both devices were deemed legal. Gun enthusiasts today praise the hellfire as offering “bump firing without the stock.” (ATF did not answer questions from Rolling Stone about why the devices are treated differently.)

From San Francisco to Waco

Hellfires are not new. In fact, the trigger devices have dark history. In a 1993 mass shooting in a San Francisco high rise, the gunman used hellfire triggers, attached to a pair of assault pistols with 50-round magazines; he killed eight, wounded six, and then took his own life. Hellfire triggers were also believed to have been in use at David Koresh’s militarized Waco, Texas, cult compound.

These days, the trigger devices are cheap, and marketed with disturbing slogans and imagery. It’s not immediately clear what device the Uvalde shooter purchased. But there are many models available online. At one retailer, just $29.95 can get you the “Classic” hellfire “made infamous by David Koresh and the Branch Davidians in Waco,” according to the sales pitch.

The “Gen II” model offers “recoil assist technology” to enable “one handed operation,” and will set you back $59.95. A new “Stealth” model, meanwhile, is for sale at just $39.95, and can be installed “invisibly within your grip on any AR15 style rifle” and be “activated or deactivated in seconds.”

It was the Trump administration, surprisingly, that banned bump-stocks — after they were used to catastrophic effect in a 2017 Las Vegas shooting. In that attack, a gunman fired bump-stock-equipped AR-15s from the 32nd floor of the Mandalay Bay hotel. The spray of more than 1,000 rounds killed 60 people and wounded more than 400 at a concert festival below.

Without the need of new legislation, the ATF issued a rule in 2019 outlawing bump stocks. The devices, the regulation states, “convert an otherwise semiautomatic firearm into a machinegun” by harnessing “the recoil energy… [to] continue firing without additional physical manipulation of the trigger by the shooter.” (The regulation has, at least so far, held up in court)

Despite operating on the same principle, hellfire triggers remain street legal — putting machine gun firepower in the hands of untrained amateurs. The rate of fire enabled by these devices is so high, in fact, that the more expensive hellfire models actually offer features to slow down the firing cycle “to save ammo!”

Hellfire triggers can be finicky to master — which may be why the young Uvalde shooter ultimately didn’t deploy his. And it’s impossible to know whether automatic fire would have led to even more devastation at Robb Elementary School. (The shooter was left unimpeded for more than an hour by dithering local police; the gunman was not pressed for time.)

The “most important” takeaway from the hellfire purchase is what it reflects about “the mindset of the shooter,” argues Sugarmann. “He had done everything he could, in his mind, to find the most lethal combination of weaponry and accessories when he planned the attack.”

Such lethality is — not coincidentally — the top selling point of a the modern firearms industry, which pitches its customers on military-grade precision and firepower. That includes the maker the Uvalde shooter’s rifle, Daniel Defense, whose Georgia headquarters are located at “101 Warfighter Way.”

The Uvalde shooter simply found, in the hellfire, a low-cost accessory that promised to unlock his weapon’s full military pedigree, by mimicking the automatic fire reserved for soldiers.

Sugarmann insists the ATF has the authority to send a warning to the industry by targeting hellfire makers, who are small operators and operate at the margins of the industry. “They’re the bottom feeders,” he says. “If you took action against one of them, it would send a message throughout the industry that ATF has regulatory role that it can use to the to protect public safety.”

The Violence Policy Center founder insists that the agency “could move against them, the way that they moved against bump-stocks.” But at least so far, Sugarmann laments, “the agency has chosen not to.”

Indeed, the text of ATF’s own bump-stock regulation notes that public commenters argued the broad language could be read to encompass “Hellfire trigger mechanisms” and similar devices. The agency’s response? Simply that it “disagrees that other firearms or devices… will be reclassified as machineguns under this rule.”