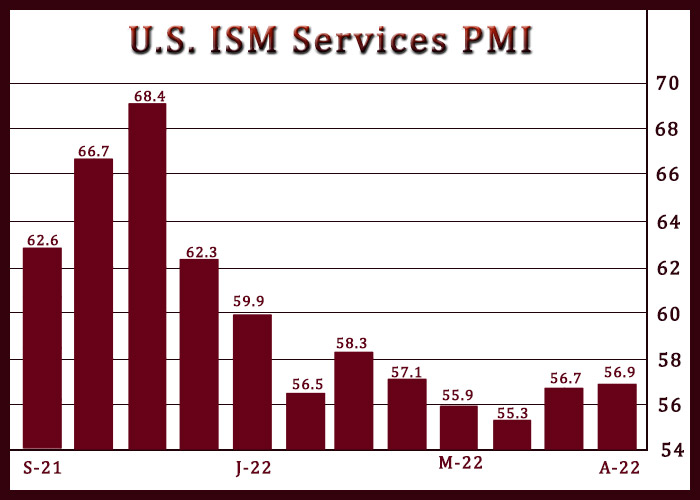 Service sector activity in the U.S. unexpectedly grew at a slightly faster rate in the month of August, according to a report released by the Institute for Supply Management on Tuesday.

The ISM said its services PMI inched up to 56.9 in August from 56.7 in July, with a reading above 50 indicating growth in the sector. The uptick surprised economists, who had expected the index to dip to 55.1.

“The services sector had a slight uptick in growth for the month of August due to increases in business activity, new orders and employment,” said Anthony Nieves, Chair of the ISM Services Business Survey Committee.

He added, “Based on comments from Business Survey Committee respondents, there are some supply chain, logistics and cost improvements; however, material shortages remain a challenge.”

The employment index also increased to 50.2 in August from 49.1 in July, indicating a slight increase in employment following two months of contraction.

The ISM said the inventories index also advanced to 46.2 in August from 45.0 in July, although a reading below 50 indicates the third straight month of contraction.

“Despite an improvement in inventory levels, services businesses still continue to struggle to replenish their stocks,” Nieves said.

Meanwhile, the report showed the prices index decreased for the fourth consecutive month, edging to 71.5 in August from 72.3 in July.

“Services will face significant growth challenges in the coming months, though we expect the sector will persevere,” said Oren Klachkin, Lead U.S. Economist at Oxford Economics. “We believe there is enough activity in the pipeline to propel growth in the near term in spite of elevated inflation, higher interest rates, and nagging supply-side problems.”

He added, “Risks of a stall are greater in 2023, when the pipeline will be less full as consumer spending tailwinds weaken while prices remain high, supply chain challenges continue to drag on activity, and financial conditions will provide less of a fillip for growth.”

The ISM released a separate report last Thursday showing its reading on U.S. manufacturing activity remained at a two-year low in August.

The ISM said its manufacturing PMI came in at 52.8 in August, unchanged from July. Economists had expected the index to edge down to 52.0.

While a reading above 50 still indicates growth in the manufacturing sector, the index remained at its lowest level since hitting 52.4 in June 2020.