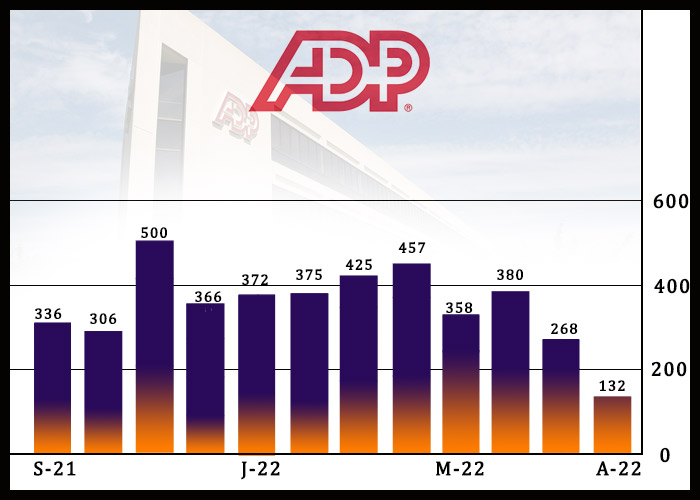 Payroll processor ADP released a report on Wednesday showing private sector employment in the U.S. increased by much less than expected in the month of August.

“Our data suggests a shift toward a more conservative pace of hiring, possibly as companies try to decipher the economy‘s conflicting signals,” said ADP chief economist Nela Richardson. “We could be at an inflection point, from super-charged job gains to something more normal.”

ADP suspended its jobs report for June and July as the firm revamped its methodology and entered into a partnership with the Stanford Digital Economy Lab.

The relatively modest increase in employment in August reflected notable job growth in the leisure and hospitality sector, which added 96,000 jobs.

Employment in the trade, transportation and utilities sector also rose by 54,000 jobs, while the report showed modest decreases in employment in the financial activities, professional and business services and education and health service sectors.

ADP also said the year-over-year change in annual pay was 7.6 percent in August, in line with monthly readings since Spring 2022.

On Friday, the Labor Department is scheduled to release its more closely watched monthly employment report, which includes both public and private sector jobs.

Economists currently expect employment to jump in 300,000 jobs in August after spiking by 528,000 jobs in July, while the unemployment rate is expected to remain at 3.5 percent.