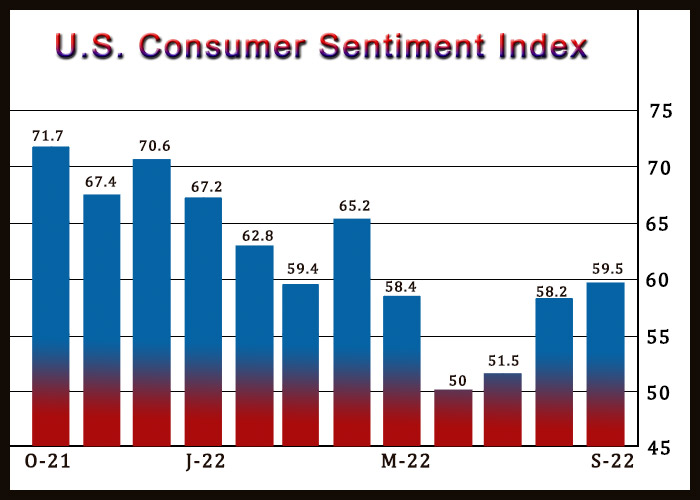 A report released by the University of Michigan on Friday showed a modest improvement in U.S. consumer sentiment in the month of September.

The University of Michigan said its consumer sentiment index inched up to 59.5 in September from 58.2 in August. Economists had expected the index to rise to 60.0.

With the uptick, the consumer sentiment index reached its highest level since hitting 65.2 in April.

The modest increase by the headline index came as the index of consumer expectations climbed to 59.9 in September from 58.0 in August.

The current economic conditions index also showed a slight increase, creeping up to 58.9 in September from 58.6 in August.

The report also showed the recent decline in energy prices has contributed to a decrease in inflation expectations.

“At 2.8%, median long run inflation expectations fell below the 2.9-3.1% range for the first time since July 2021,” said Surveys of Consumers Director Joanne Hsu. “However, it is unclear if these improvements will persist, as consumers continued to exhibit substantial uncertainty over the future trajectory of prices.”

Bitcoin Plummets but is there More Downside Ahead?