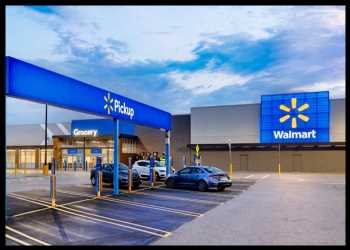 “We had a good quarter with strong top-line growth globally led by Walmart and Sam’s Club U.S., along with Flipkart and Walmex. Walmart U.S. continued to gain market share in grocery, helped by unit growth in our food business,” said Doug McMillon, President and CEO.

For the third quarter, the company posted a net loss attributable to Walmart of $1.80 billion or $0.66 per share, compared to net income of $3.11 billion or $1.11 per share in the prior-year quarter. Results for the latest quarter included $1.11 per share of unrealized losses on equity and other investments and $1.05 per share of charges related to opioid legal settlements.

Excluding items, it reported profit for the quarter were $1.50 per share, compared to $1.45 per share in the year-ago quarter.

On average, 29 analysts polled by Thomson Reuters expected the company to report earnings of $1.32 per share for the quarter. Analysts’ estimates typically exclude special items.

Consolidated gross profit rate decreased 89 basis points, primarily due to markdowns and mix of sales in the U.S., an inflation-related LIFO charge at Sam’s Club, and the timing of Flipkart’s annual event, The Big Billion Days.

Consolidated operating expenses as a percentage of net sales increased 144 basis points, due to charges of $3.3 billion related to opioid legal settlements.

Looking ahead the fourth quarter, the company now expects adjusted earnings per share to decline 3 to 5 percent on consolidated net sales growth of about 3 percent, with a negative impact of about $1.3 billion from currency fluctuations. Walmart U.S. comp sales growth is expected around 3.0 percent.

Analysts are looking for earnings of $1.46 per share on revenue growth of 3.8 percent to $158.76 billion for the quarter.