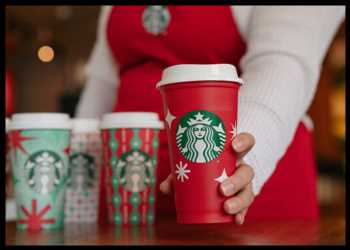 Starbucks Workers On Strike At US Stores

Starbucks employees at more than 100 stores across the United States went on a one-day strike on the coffee giant’s annual Red Cup Day on Thursday.

According to the union, stores in 25 states decided to take part in the labor action, with some planned to take shorter walkouts and some striking all day.

The union drive at Starbucks stores nationwide was triggered by a historic vote last December at a company location under the Workers United New York, a branch of the Service Employees International Union.

Since then, Starbucks has been facing accusations of retaliating against and intimidating involved employees, which the company has denied.

Starbucks, which operates more than 9,000 company-owned stores in the U.S., opposes the unionization effort saying that it considers working directly with employees makes it function better.

According to the National Labor Relations Board or NLRB, at least 257 Starbucks stores have voted to unionize since late last year, while 57 stores’ workers have opted not to unionize. The union reportedly has started contract talks with the company at 53 stores, but agreements are yet to be reached.

In June, the NLRB’s region director in Buffalo asked the court to re-instate seven local Starbucks workers who were improperly fired over the course of six weeks.

In August, Starbucks was ordered by a federal judge to reinstate seven employees at a Memphis store after finding that the company illegally fired them due to their union activities.

In mid-August, the company asked the federal labor board to suspend all mail-in ballot union elections nationwide, alleging misconduct in the voting process.

The strike coincided with Starbucks’ annual Red Cup Day, one of the busiest days of the year for the company, when it gives free limited edition reusable red cups to those who order a handcrafted holiday or fall drink at participating U.S. stores.

In early November, the company unveiled its holiday menu to celebrate the 25th anniversary of the red holiday cups. The coffee chain first rolled out the cups in 1997 to signify the arrival of the holiday season.

Starbucks also said it would debut its annual limited-edition holiday merch lineup, which features an array of colorful cold cups, tumblers, mugs and more in a variety of holiday designs.