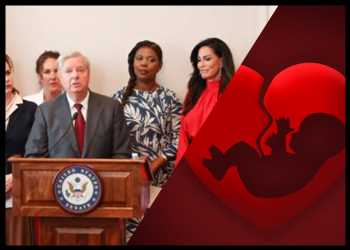 Known as the Protecting Pain-Capable Unborn Children from Late-Term Abortions Act, the legislation would set a federal minimum protection for unborn children and ban abortion after 15 weeks gestation. Sen. Graham claims that fetuses can feel pain at that point in development.

“Working closely with the preeminent pro-life groups in the country, we are today introducing legislation to ban abortion at a time when unborn children can feel pain,” said Graham, announcing the new Bill on Capitol Hill. “Our legislation, which bans abortion after 15 weeks gestation, will put the United States abortion policy in line with other developed nations such as France, Germany, Belgium, Denmark, Spain, and other European nations,” he added.

47 out of 50 European nations limit elective abortion prior to 15 weeks gestation, the Republican Senator cites.

Graham noted that more than 55,000 abortions at 15 weeks gestation or later occur each year in the United States. A majority of Americans – 72 percent – are in favor of limiting abortions after 15 weeks, according to him.

The new legislation prohibits doctors from performing abortions after 15 weeks gestation except in situations involving rape, incest, or risks to the life and physical health of the mother.

After Roe v. Wade was overturned by the Supreme Court, Democrats in Congress have rallied behind pro-choice legislation which allows late-term abortion.

The Republican legislation is opposed by Democrats alleging that it is a crucial first move towards a total ban on abortion.

The White House said this bill is wildly out of step with what Americans believed, and would strip away women’s rights in all 50 states.

While the President and Vice President are fighting for progress, Republicans in Congress are focused on taking rights away from millions of women, according to a statement issued by Press Secretary Karine Jean-Pierre.

President Biden and Congressional Democrats are committed to restoring the protections of Roe v. Wade in the face of continued radical steps by elected Republicans to put personal health care decisions in the hands of politicians instead of women and their doctors, threatening women’s health and lives, it added.

Speaker of the House Nancy Pelosi said, “Instead of fighting actual crime, Republicans would drag doctors off to prison, while forcing ER physicians to focus on the threat of prosecution instead of the emergency medical care owed their patients.”