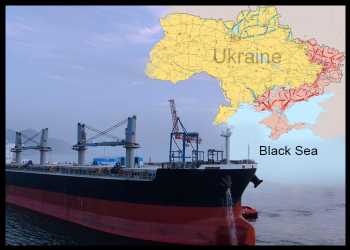 Agreement To Set Up Mechanism To Allow Grain Exports From Ukraine

In UN-brokered talks in Türkiye between Russia and Ukraine, an agreement has been reached to form a joint coordination center to ensure the security of Ukrainian grain exports through the Black Sea.

The breakthrough agreement on allowing the resumption of grain exports amidst the ongoing Russian attacks on Ukraine came during a meeting Wednesday in Istanbul between military delegations from Turkiye, Russia, and Ukraine, along with UN officials.

The task of the coordination center, to be located in Istanbul, will be to carry out “general monitoring and coordination of safe navigation in the Black Sea,” said Andriy Yermak, an adviser to Ukraine’s President Volodymyr Zelensky.

Separately, UN Secretary-General António Guterres said that a “critical step forward” had been taken to allow the “safe and secure export” of millions of tons of grain via the Black Sea, but emphasized that no formal agreement has yet been signed between Russia and Ukraine.

The Government of Türkiye has been working with the UN to broker a deal for weeks, after the Russian invasion of Ukraine on 24 February, saw a major rise in prices of grains, cooking oils, fuel and fertilizer, together with major supply chain issues across the world.

Ukraine is the world’s major supplier of corn and wheat, and much of the grain imported by developing countries comes from there.

But the country’s Black Sea ports, through which majority of the grains are exported, are blockaded by Russia. It includes the crucial hub of Odesa.

“In a world darkened by global crises, today, at last, we have a ray of hope to ease human suffering and alleviate hunger around the world”, the UN chief told reportersat UN Headquarters in New York.

The Secretary-General said that he hoped the first meeting in Istanbul would lead to another, “very soon”, potentially next week.

Asked about the wider possibility of a peace deal being reached between Russia and Ukraine to end the fighting, Guterres said there was still a long way to go, although Wednesday’s developments were an extremely encouraging sign.

With widespread fighting continuing in the country, the Ukrainian Prosecutor General’s Office said Thursday that nearly 350 Ukrainian children have been reported killed and more than 1,000 others injured in Russian attacks since February.

FrontFanz – An Iconic Polygon Entertainment Platform Sold Out In 72 Hours