One woman died from severe burns and 14 people were injured during a frying pan explosion at a village baking festival in Germany.

Another five people were in life-threatening condition, four from burns and one who suffered a heart attack during the explosion at the festival in Freudenberg.

Eyewitnesses said the victims were running around ‘like torches’ at the Backesfest festival in the western German village, according to local media.

The ages of the victims ranged from 31 to 75, German news agency dpa reported on Monday. 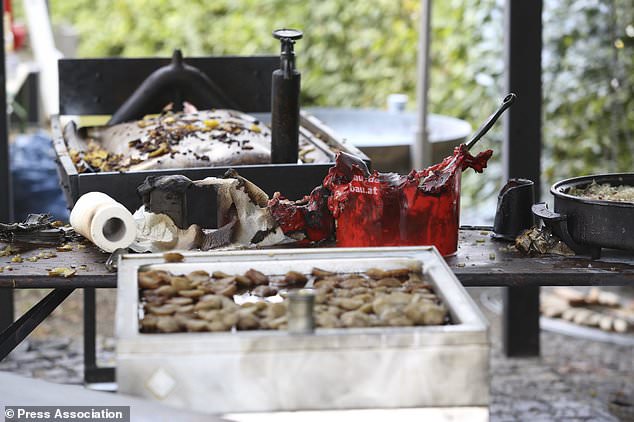 The remains of a booth are pictured (above on Sunday) after an explosion at a village festival in Freudenberg, Germany 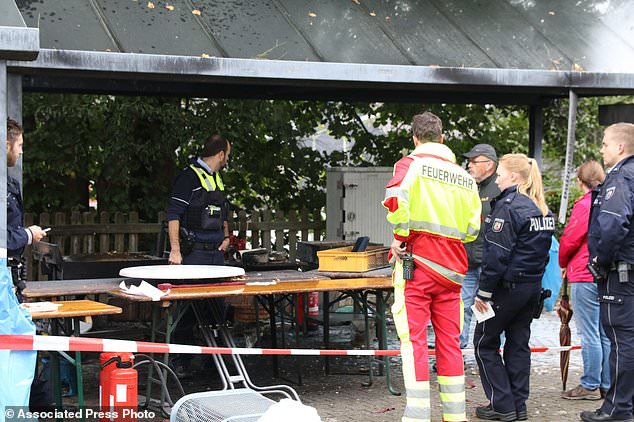 Police officers investigate a booth after an explosion at a village festival in Freudenberg, Germany. Authorities say 14 people have been injured, five of them with life-threatening burns

Police said it appears likely that oil inside a big frying pan caused the blast on Sunday that was attended by about 100 people, according to dpa.

The explosion may have been triggered by raindrops falling into the hot oil, but investigators said it would still take them several days to fully understand what happened.

Freudenberg’s mayor Nicole Reschke told the Bild newspaper the incident was an accident.

She said: ‘This is a terrible misfortune for our little place.’

Interior Minister Herbert Reul praised doctors and the emergency services for their work int he aftermath of the accident.

He said on Sunday: ‘This terrible accident affects me very much , I am in prayer with the most seriously injured.

‘My thanks go to the doctors who are now taking care of these people and all the rescue workers on the ground. ‘

The Backesfest celebrates the annual start of operations of a traditional old bakery in the village.