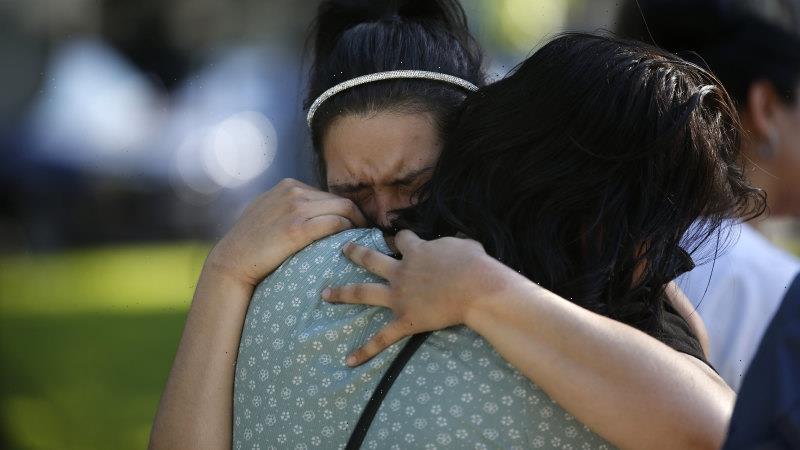 When the good guys don’t show up: great American myth evaporates in Uvalde

The tragedy playing out in Uvalde, Texas, the last few days – 21 dead, including 19 children, in yet another massacre at an American primary school – is sourced in a mix of corruption, neglect, and fecklessness that, to use a biblical term, passeth all understanding.

Almost 10 years ago we saw 26 dead at the Sandy Hook Elementary School in Newtown, Connecticut, killed at the hands of a young man with semi-automatic weapons. It seemed like that could be the most extreme tragedy that could befall a nation with such atavistic gun laws. But here we are today, seeing its carnage nearly matched by another boy with similar weaponry 2500 kilometres away. 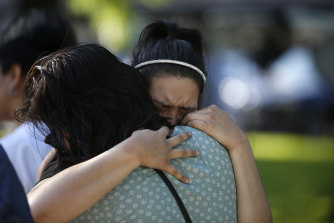 A woman is comforted at a memorial site for the victims killed in this week’s elementary school shooting in Uvalde, Texas.Credit:AP

Like the police in the halls of Robb Elementary School on Tuesday, national politicians stand by while mass shootings unfold with depressing and enraging regularity. Why this is so has its roots in two things. One is raw political power. The National Rifle Association is a powerful lobby. It is a web of organisations, and exactly to what extent its myriad arms are funded by gun manufacturers isn’t clear. But it ruthlessly targets politicians who support any form of gun control – even overwhelmingly popular proposals for mandatory national background checks, or to ban assault-style weapons. It has cleverly advanced legislation to protect gun manufacturers from product liability laws and does its best to obfuscate and make difficult even government-funded research on guns and gun violence.

The second root cause is sourced in a widely spun American myth. There is, we are told, a “real America”, from the so-called heartland, places like Texas, filled with men (always men) “who stand up for what’s right”, where time-honoured American virtues remain part of the bedrock of society, and so on and so forth. When it is suggested, for example, that mentally ill people should not be allowed to purchase assault weapons, the idea is shouted down. All we need, we are told, is “a good guy with a gun to stop a bad guy with a gun”. 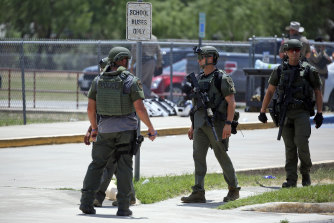 You can see, in this case, the evaporation of this myth. Uvalde is a depressing setting for how it all plays out. The facts make your heart sink. As governments sit idly by and the threat of mass shootings grows, the gun lobby uses the tragedies cannily. One sober truth anti-gun forces must contend with: Gun sales spike after every mass shooting, as the industry sounds the alarm about the possibility of new gun legislation.

It gets darker. The same sort of scare tactics have resulted in the militarisation of local police forces. Uvalde had actually spent money recently on active shooter training. This poor Texan town has a population of only 15,000 people and yet reportedly spends 40 per cent of its budget on its police force. Pictures of this illustrious ensemble posing in expensive assault gear were quickly distributed over social media after Tuesday’s shooting. The cultural appeal of such cartoonish costumes is plain. But behind the scenes, multiplied by thousands of times across a country of more than 330 million people, you can see the extravagant financial incentives available to gun manufacturers.

And yet, as the shooting at Robb Elementary unfolded, the good guys didn’t show up. Trained police officers fell back and cowered, while a killer with a weapon of mass destruction went about his malevolent business. Federal agents who arrived at the scene were prevented from making moves until, according to some reports, they eventually took charge and brought the savagery to an end.

To be fair, the local cops have put forth an explanation: the commander in charge felt it was a situation with a barricaded shooter, which calls for different tactics from when it’s an active shooter. But this is belied by stories of emergency calls from children inside the classroom begging for help, the continuous, sporadic shooting during those 80 minutes the gunman was in there with them, and the fact some parents actually went off themselves into the school to rescue their children.

No one wants to demonise police officers. They have a tough and sometimes dangerous job. They’re underpaid, too. While the police structure in the United States is patently in need of widespread reform, let’s remember that every cop is human, and that most work hard.

But it must be said that the long-standing charge that too many people, for too long, have merely stood by while these horrific scenarios have played out is no longer a metaphorical construct. The emboldened right in America has weaponised defiance, a lack of shame, and a refusal to acknowledge hypocrisy and false narratives. For decades now, while blood has flowed in classrooms across the country, we’ve been told nothing can be done. We now see what happens when that tactic is taken to its logical extreme.

BIll Wyman is a former assistant manager editor of NPR in Washington. He lives in Sydney.

What does UST’s De-Pegging Mean for the Wider Market?