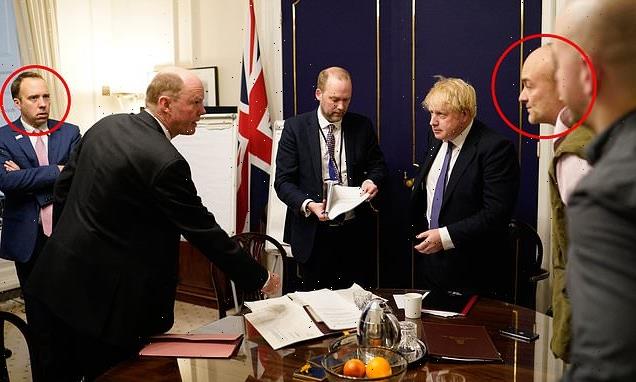 What really happened with Covid care home testing in 2020?

What did the Government REALLY do about testing in care homes? How Matt Hancock’s claims about scaling up Covid tests square with Dominic Cummings’ allegation that the ‘protective ring was nonsense’

Matt Hancock has come under intense scrutiny this week for fudging plans to force hospitals to test people for coronavirus before discharging them to care homes.

The Health Secretary has been accused of lying even to Boris Johnson about systems in place to stop sick people triggering home outbreaks in the first wave, with critics saying he failed to deliver on a promise to test all discharged patients.

Former No10 adviser Dominic Cummings started the fire in his explosive interview with MPs on Wednesday when he said Mr Hancock’s claims of a protective ring around care homes at the start of the pandemic were ‘complete nonsense’.

He said: ‘Quite the opposite of putting a shield around them, we sent people with Covid back to the care homes… It was obviously not being taken seriously.’

Mr Hancock scrambled to defend himself against a grilling from journalists at last night’s Downing Street press conference when he rejected Mr Cummings’s account.

Testing all patients on discharge did not become official policy until mid-April, by which time more than 1,600 care home residents had already died and Covid had been in Britain for two-and-a-half months.

And a damning official report published in June last year found up to 25,000 people had been discharged into homes without tests in a move dubbed ‘extraordinary’ and ‘devastating’.

Here is a timeline of how Mr Cummings’s and Mr Hancock’s claims square with what really happened in 2020: 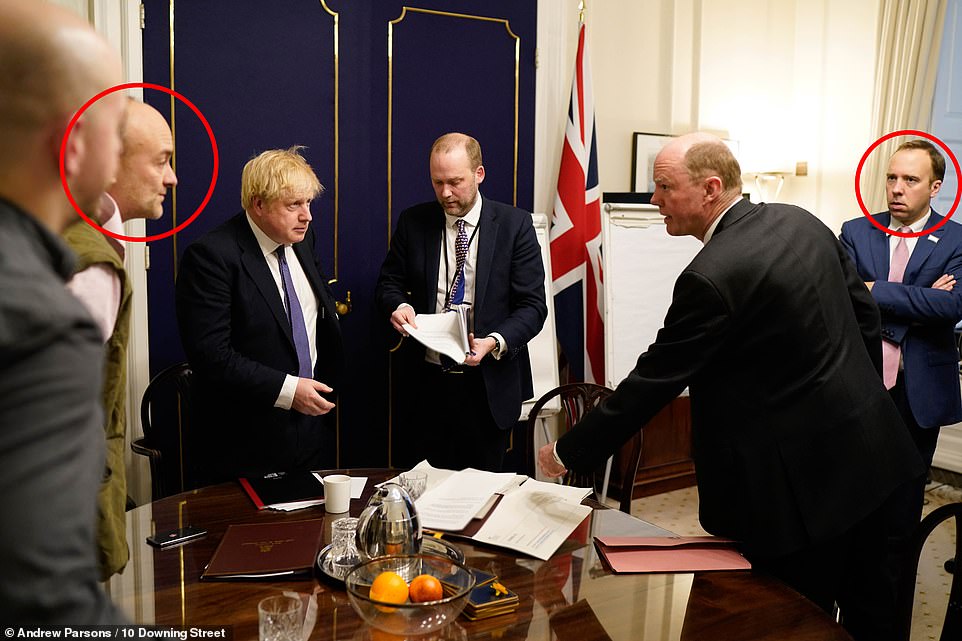 Dominic Cummings and Matt Hancock are pictured looking worried at a meeting in 10 Downing Street in February 2020, before the UK went into its first coronavirus lockdown 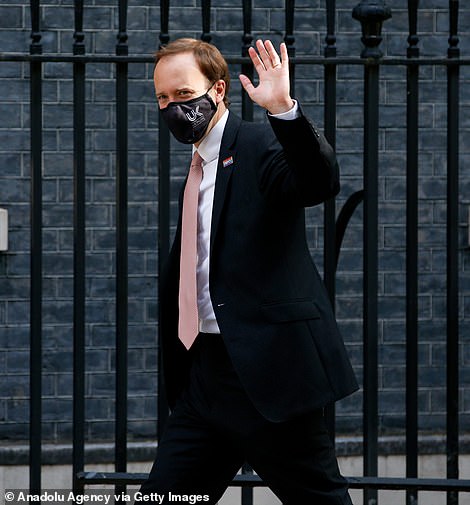 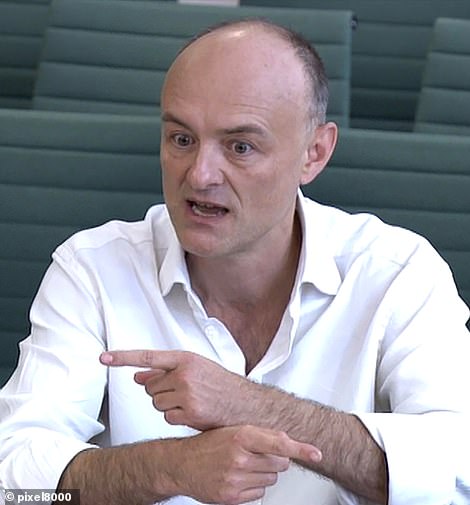 Matt Hancock (left, pictured arriving at Downing Street today) last night had to fend off a grilling over whether he failed to deliver on a promise to test everyone for Covid if they were being discharged from a hospital into a care home during England’s first wave. Dominic Cummings (right, pictured in front of MPs during an explosive grilling on Wednesday) this week said the Government’s claim that it threw a ‘protective ring’ around care homes was ‘complete nonsense’ 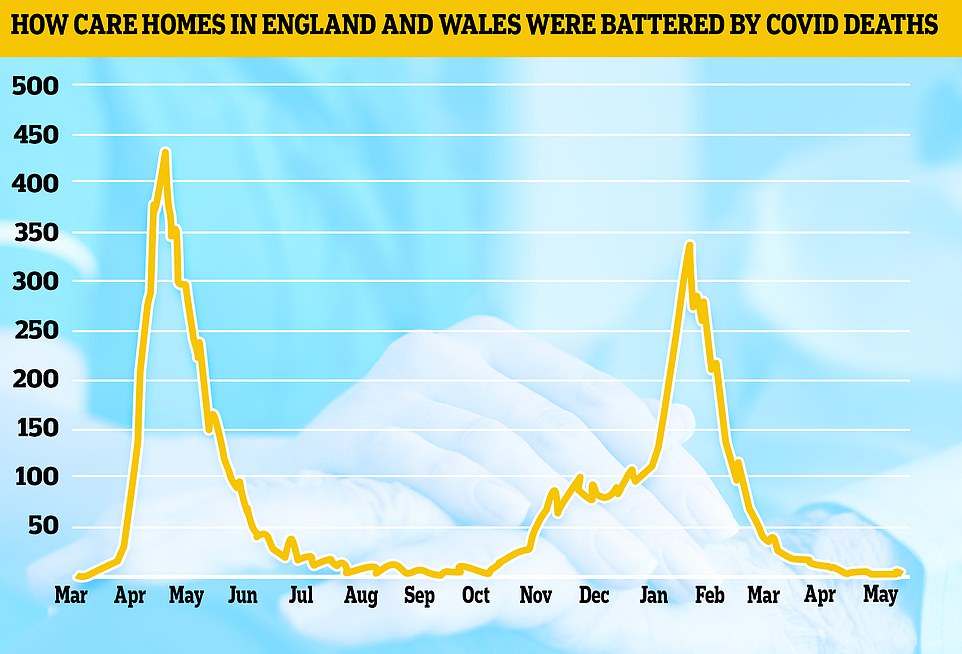 More than 30,000 care home residents have died from Covid, with the toll worst in the first wave when testing was not widely available

Dominic Cummings’s claim: Mr Cummings said that the Health Secretary in March promised the Government that testing would be brought in for patients being discharged from hospitals into care homes.

In the bombshell committee meeting on Wednesday he said: ‘We were told categorically in March people would be tested before they went back to homes, we only subsequently found out that that hadn’t happened.’

Matt Hancock’s claim: Mr Hancock said he had not promised to test everyone being discharged into a hospital but that he was committing to setting up a test system, beginning in March.

He said at Downing Street last night: ‘My recollection of events is that I committed to delivering that testing for people going from hospital into care homes when we could do it.’

‘And then we were able to introduce the policy of testing everybody before going into care homes, but we could only do that once we had the testing capacity.’

What was really happening: Detailed figures about coronavirus cases and deaths in care homes were not available at the very start of the epidemic but scientists realised they were at serious risk and a lockdown of residents was one of the Government’s first strict policies, brought in on March 13.

Hospital patients were being sent home to free up ward space for Covid patients but there was no system in place to test those discharged patients for coronavirus.

It was explicit policy that people did not need to be tested, and this remained in place until April 15.

Official guidance issued by NHS England and the Department of Health in March said: ‘Negative tests are not required prior to transfers/admissions into the care home.’

Dominic Cummings’s claim: Cummings said the Prime Minister was mortified to discover that the discharge testing wasn’t being done when he himself was sent home from hospital.

Mr Johnson left hospital after his own battle with Covid on April 12, shortly after which he realised the care home testing wasn’t being done, Mr Cummings claimed.

He said: ‘When we realised in April that this had happened the PM said after coming back from being ill: “What on earth are you telling me? Hancock told us in the Cabinet room that people were going be tested before they went back to care homes. What the hell happened?”‘

Matt Hancock is facing fresh pressure today amid claims Dominic Cummings has documents showing the PM feared he had been ‘misled’ over Covid testing for care homes at the height of the pandemic.

The Health Secretary has been desperately trying to fend off allegations from Dominic Cummings that he ‘lied’ to Boris Johnson in March last year about whether residents would be screened on leaving hospital.

After days of dodging, Mr Hancock finally addressed the issue directly last night, insisting his ‘recollection’ was he had only promised to ‘build testing capacity’ so that the checks could be carried out.

But there are reports today that Mr Cummings has a document from May last year indicating alarm in Downing Street that Mr Hancock’s ‘negligence’ had ‘killed people in care homes’.

According to ITV, Mr Cummings has documents showing the PM’s office summoned Mr Hancock to No10 on May 3 last year, for a meeting the following day, to explain whether he had misled the chief aide, the PM and then Cabinet Secretary Mark Sedwill on the testing of patients before discharge into care homes, as well as about further testing of residents and staff.

The DoH said it ‘did not recognise’ the claim and Mr Hancock ‘had many meetings with the PM across a range of issues’.

The latest claims will heap further pressure on Mr Hancock, despite the PM trying to shore him up overnight by issuing a statement saying he had ‘full confidence’ in his senior minister.

Mr Cummings added: ‘Now while the Government rhetoric was we have put a shield around care homes and blah blah blah, it was complete nonsense.

‘Quite the opposite of putting a shield around them, we sent people with Covid back to the care homes.’

Matt Hancock’s claim: The Health Secretary repeated his claim that he never committed to testing every patient but to setting up a system to make it possible.

He said: ‘We started with a capacity of less than 2,000 in March last year and got to 100,000 tests a day. And we set all of this out at the time in public documents. It’s all a matter of public record.’

What was really happening: On April 15 – three days after Boris Johnson was discharged from hospital – Matt Hancock announced that there were enough Covid tests to offer one to everyone in a care home who needed one.

The previous policy had been that the first five people in a home to get sick would be tested and, if there were multiple positive results, it would be assumed that there was an outbreak and further testing wasn’t needed – anyone with symptoms probably had the virus.

Mr Hancock said at the time: ‘We are doing everything we can to keep workers, residents and their families safe, and I am determined to ensure that everyone who needs a coronavirus test should be able to have access to one.’

The next day, April 16 – four days after Mr Johnson’s discharge – the NHS and Department of Health policy changed to require for the first time that everyone discharged from a hospital into a care home must be tested for coronavirus.

But the ‘peak’ of the virus had already passed — infections were at their highest in the last week of March, and deaths in the second week of April, official figures show.

By April 16, 1,661 care home residents in England had already died of Covid, according to the Care Quality Commission.

And over the next three weeks – during which the victims could have been infected before the policy change – another 7,461 would die with the virus, taking the total above 9,000.

May: Industry hits back at Government claim of a ‘protective ring’ around care homes

Possible impacts of not having the mandatory testing in place earlier started to emerge in May as critics slammed the Government for not protecting care homes.

Professor Green said: ‘Ask them why they did not prioritise care homes for testing,’ the Financial Times reported.

‘If there was a protective ring initiated by the Government it did not feel like that for the people who were living and working in care homes.’

ITV News revealed thousands of care home beds had been reserved for people getting discharged from hospital to free up space and that some of them were taken in even if they tested positive for the virus.

One care home owner, Anita Astle in Nottingham, said she felt the home was being used as a ‘Covid cleansing house’ because it would get lumped with patients who would have to spend an entire two-week self-isolation period there.

By the end of May the first wave was coming to an end and at least 12,715 English care home residents had died. 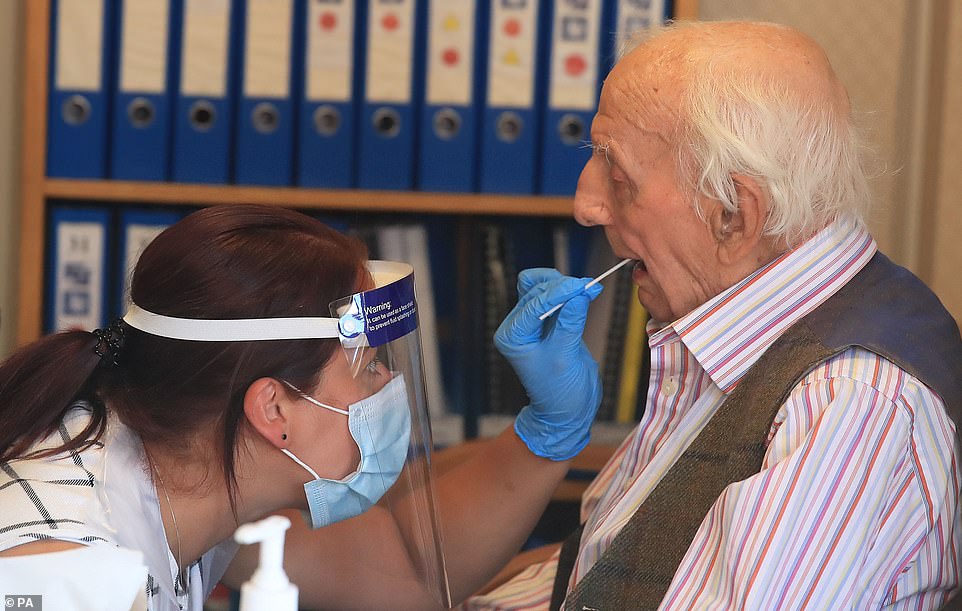 Care home testing did not become widely available until April 2020, by which time more than 1,600 residents had already been killed by Covid (Pictured: A 94-year-old man is tested at a home in North Tyneside in May 2020)

A damning report by the National Audit Office revealed that over 25,000 people had been discharged from hospitals into care homes without being tested during the first wave.

It counted the 25,000 patients discharged between March 17 and April 15. The peak of coronavirus deaths in hospitals in England was on April 8.

Meg Hillier, chair of the public accounts committee, claimed it highlighted that care homes were shoved ‘to the back of the queue’ during the pandemic.

The NAO report identified a ‘problematic’ relationship between social care and the NHS, which saw 25,00 hospital patients discharged into care homes before there was widespread testing.

It said years of failed efforts to integrate the health service and social care sector were to blame for care homes being abandoned during the crisis.

More than one in three care homes in the country had suffered outbreaks of Covid-19 by June.

Ms Hillier said: ‘Care homes were at the back of the queue for both PPE and testing so only got a small fraction of what they needed from central government.

‘Residents and staff were an afterthought yet again: out of sight and out of mind, with devastating consequences.’

On whether care home transmission was taken seriously enough by the Government, Dominic Cummings said this week: ‘It was obviously not being taken seriously. Like all of these things it wasn’t deliberate, it was a function of the fact that the system was overwhelmed.’