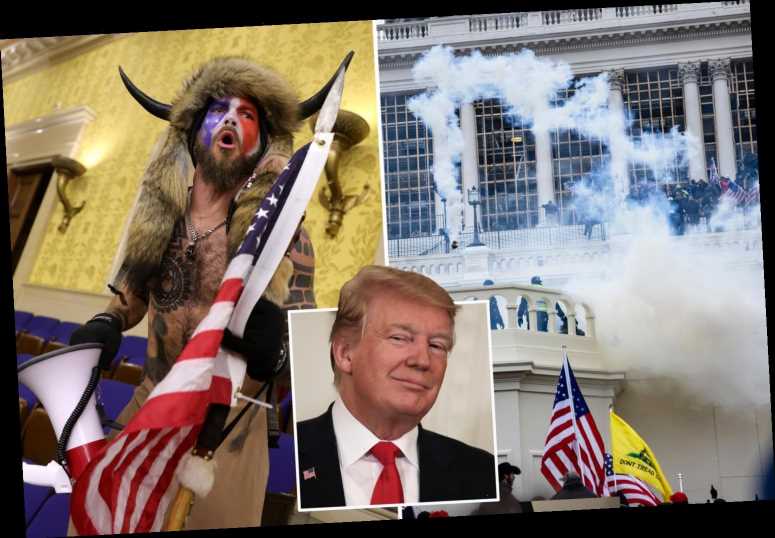 CHAOS has ensued at the US Capitol after President Donald Trump’s supporters stormed the building, broke windows, and shoved federal officers in Washington DC.

After hosting a rally outside the White House prior to the mayhem, Trump is nowhere to be found but he found time to comment on Twitter about the havoc that took place.

President Trump has been bunkering in the White House as his supporters break into the US Capitol in an effort to intimidate Congress members to certify him as the winner of the 2020 election.

Trump pleaded with his supporters to "stay peaceful" and "go home" hours after they stormed the federal building.

“Please support our Capitol Police and Law Enforcement. They are truly on the side of our Country. Stay peaceful!” he tweeted.

An hour later, the President wrote: “I am asking for everyone at the U.S. Capitol to remain peaceful. No violence! Remember, WE are the Party of Law & Order – respect the Law and our great men and women in Blue. Thank you!”

Shortly after the last tweet, he released a video on his Twitter saying: "I know your pain, I know your hurt. We had an election that was stolen from us. It was a landslide election and everyone knows it, especially the other side.

He added: "We don't want anybody hurt. It's a very tough period of time, there's never been a time like this where such a thing happened, where they could take it away from all of us, from me, from you, from our country.

"This was a fraudulent election but we can't play into the hands of these people, we have to have peace. So go home, we love you, you're very special, you've seen what happens and you see the way others are treated that are so bad and so evil, I know how you feel.

"But go home and go home in peace."

Who has been injured?

A woman was shot in the chest and critically wounded at the Capitol.

Six people were reportedly taken from the building to a hospital with injuries in the violent scenes.

A graphic clip shared on social media showed a woman bleeding out from the neck after she was allegedly shot.

Additionally, video showed protesters running across the grass and toward the building in an attempt to occupy it after the fence was broken as some tried to occupy the building.

Multiple officers have also been injured due to the violence in the building.

The National Guard will be deployed to calm the crowd and restore law and order.

What have Congress members said?

Speaker of the House of Representatives Nancy Pelosi and Senate Minority Leader Chuck Schumer have called on Trump to demand that all protesters leave the Capitol and its grounds immediately.

Senator Ted Cruz, who challenged the election results earlier that day, tweeted: “Violence is always unacceptable. Even when passions run high. Anyone engaged in violence—especially against law enforcement—should be fully prosecuted.

Adding: “God bless the Capitol Police and the honorable men & women of law enforcement who show great courage keeping all of us safe.”

What did Trump say in his MAGA protest speech today in Washington?

For the second consecutive day, MAGA fans rolled into Washington DC in their continued support of Trump and his baseless claims of a rigged election.

"We'll never give up. We'll never concede," the president said. "We will not take it anymore."

Trump insisted: "This was not a close election."

He later questioned: "Does anybody really believe Joe had 80million votes?"

Despite the baseless claims from Trump and his supporters, election officials have repeatedly said there is zero evidence of fraud that would have altered the election results.

Trump then slammed late-night vote counting the presidential election as "explosions of bulls***."