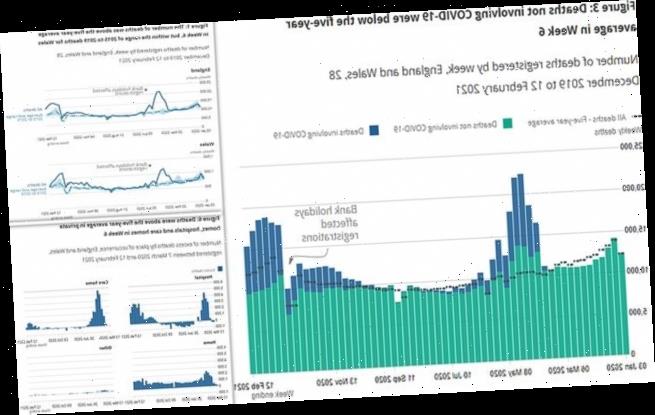 Weekly Covid deaths in England and Wales drop again by 22%

Weekly Covid deaths in England and Wales drop again by 22%: ONS recorded 5,691 virus-linked deaths in mid-February – but the disease was still to blame for a THIRD of all deaths

Covid deaths have fallen by almost a quarter in a week, official figures revealed today, after they dropped for the second seven-day spell in a row.

Office for National Statistics (ONS) data showed there were 5,691 fatalities linked to the virus in England and Wales in the week ending February 12, which marked a 22 per cent dip from the previous period.

The number of people succumbing to the virus also declined in every English region and deaths from all causes dropped by a tenth, as Britons continued to turn the tide on the second wave.

But despite the promising statistics Covid deaths remained perilously high, accounting for more than a third of deaths recorded. The latest week was the tenth deadliest of the pandemic.

Some 1,491 care home residents also died after catching the virus, which was a 30 per cent drop from the previous week. But deaths were still 753 above the same time last year.

ONS death figures are showing a slow downturn because they lag behind the daily fatality figures, after statisticians analyse each to identify all those where the virus was mentioned.

The Department of Health’s daily updates show the number of deaths from the virus is already falling in line with nosediving infections, after peaking in mid-January.

There is a delay of about three weeks between someone getting infected with the virus and sadly succumbing to the disease, meaning it takes time for a dip in cases to show up in the deaths figures. 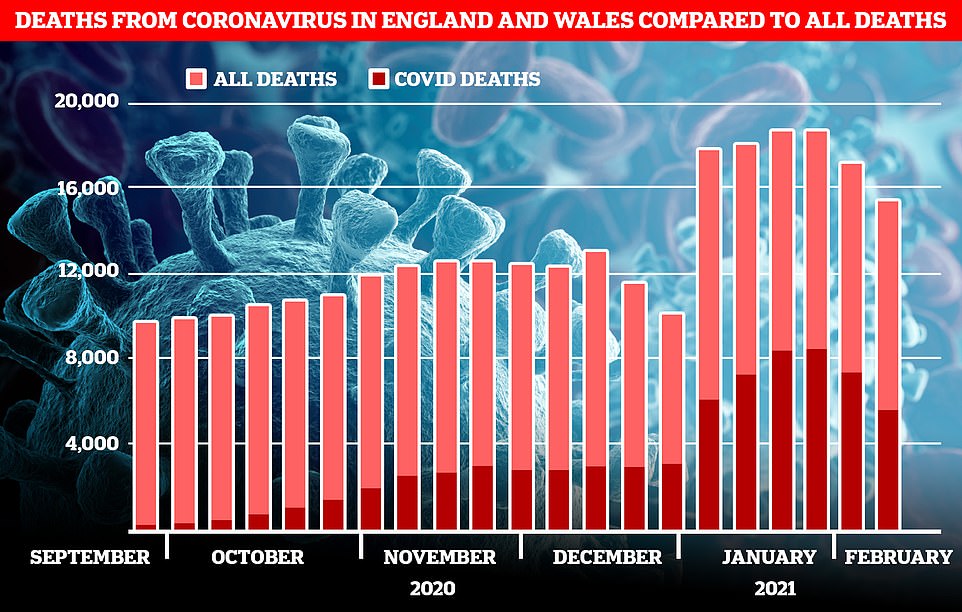 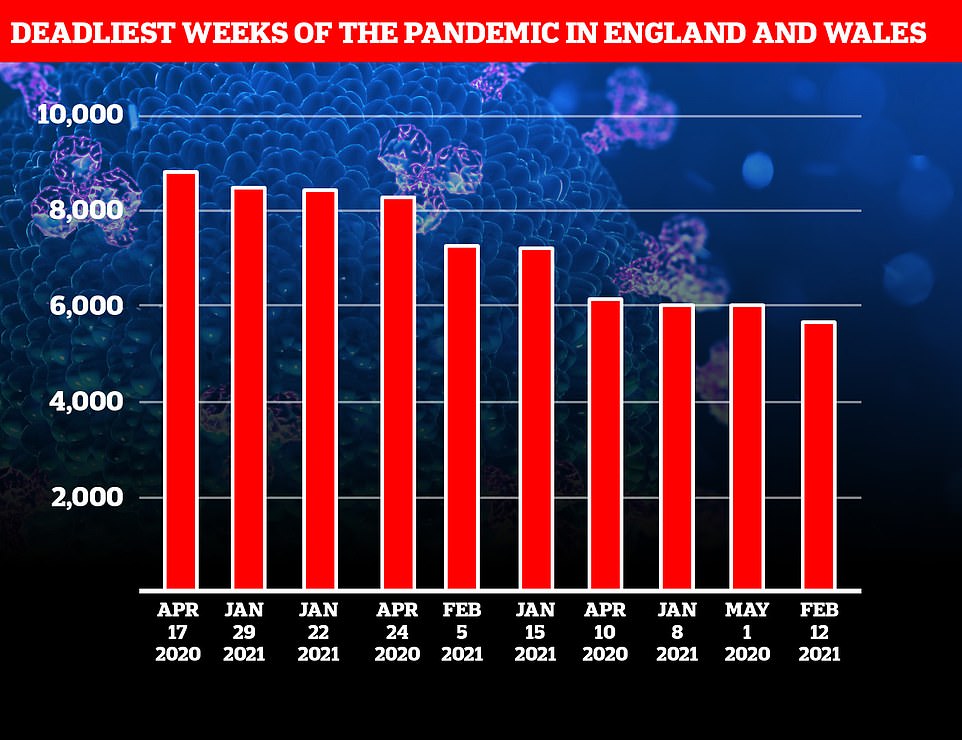 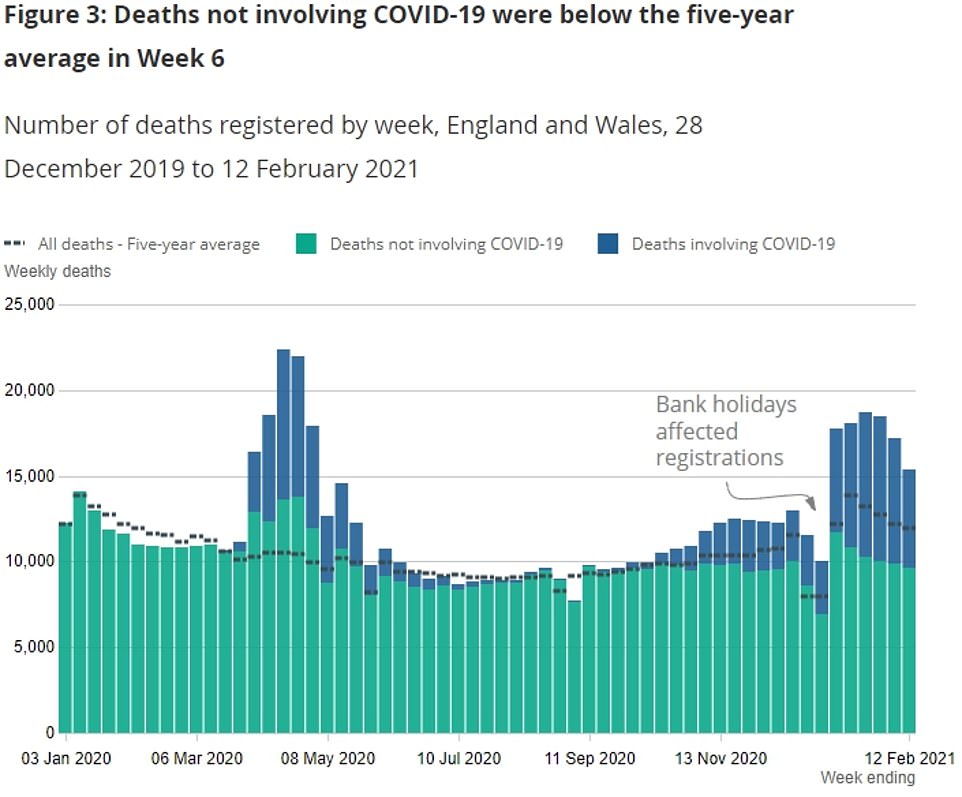 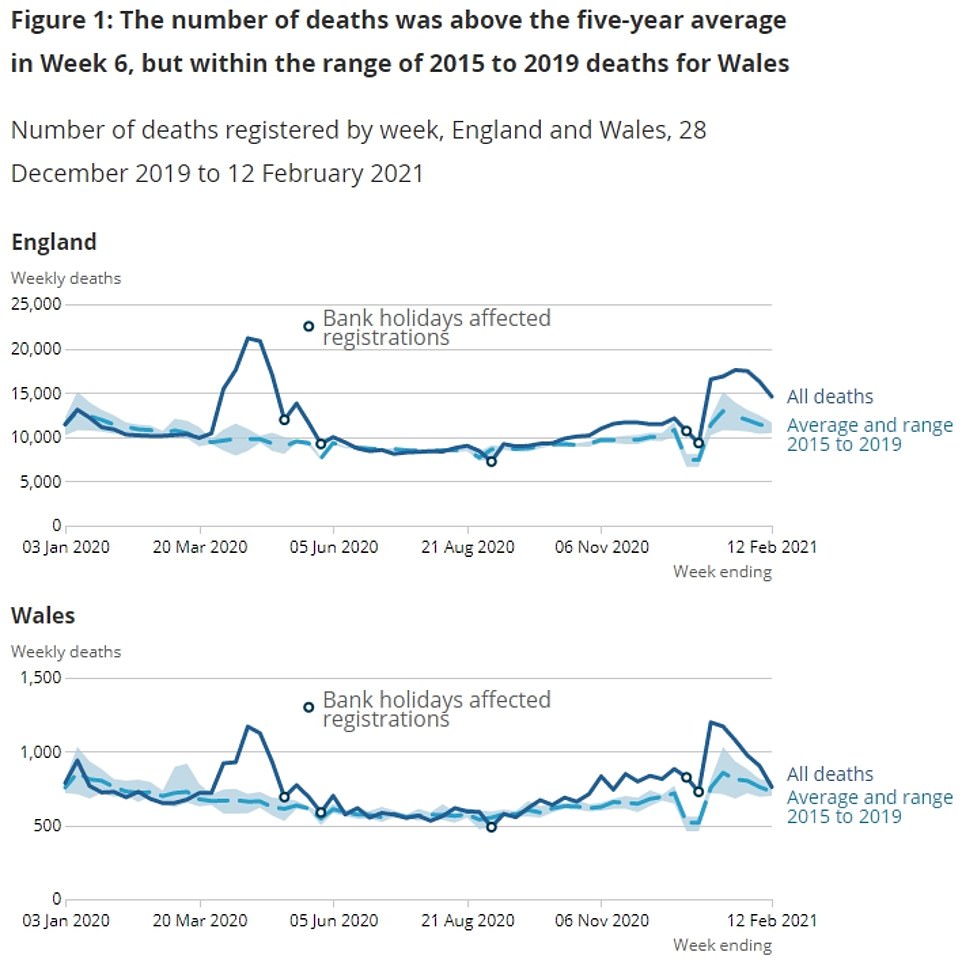 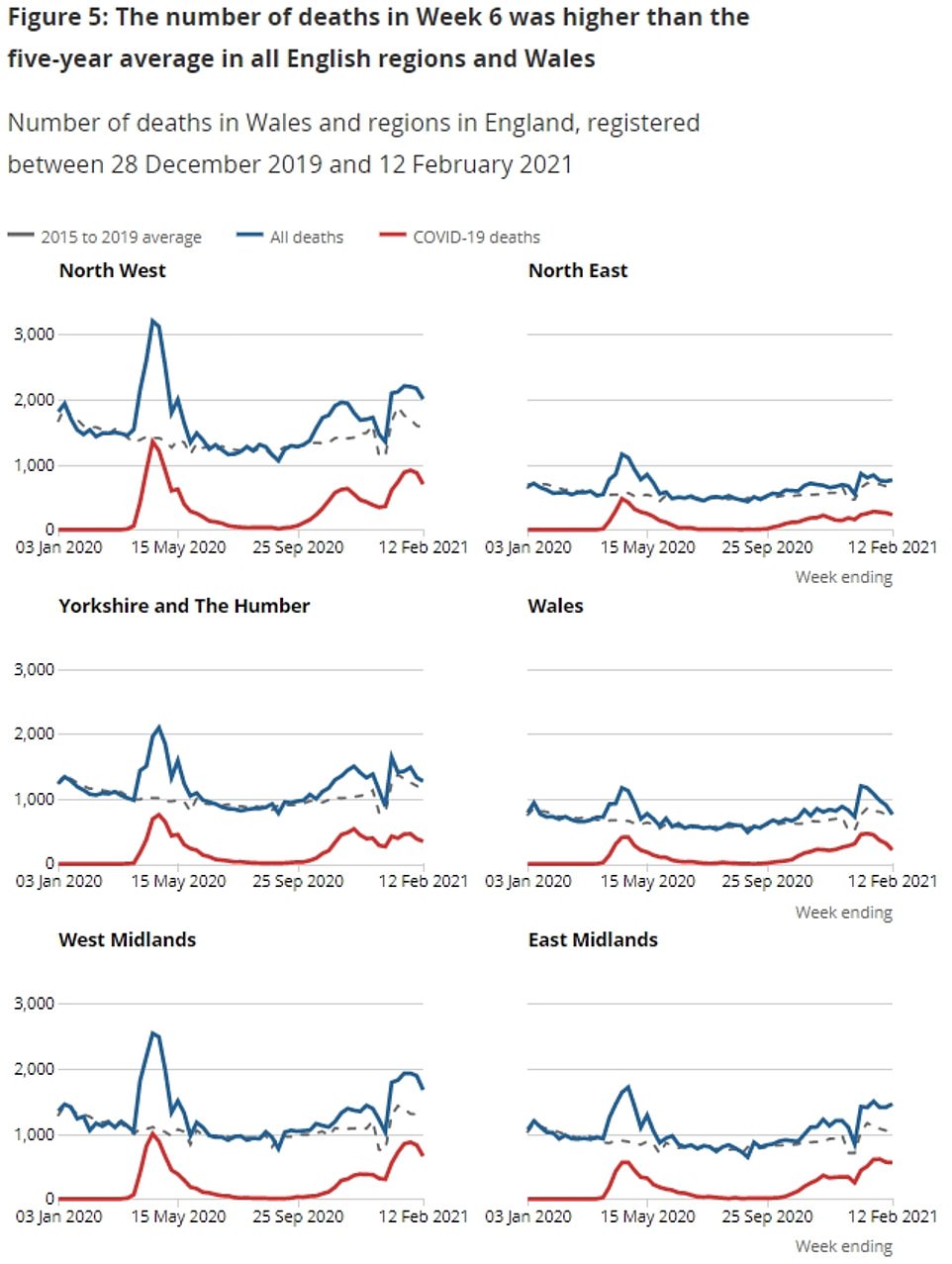 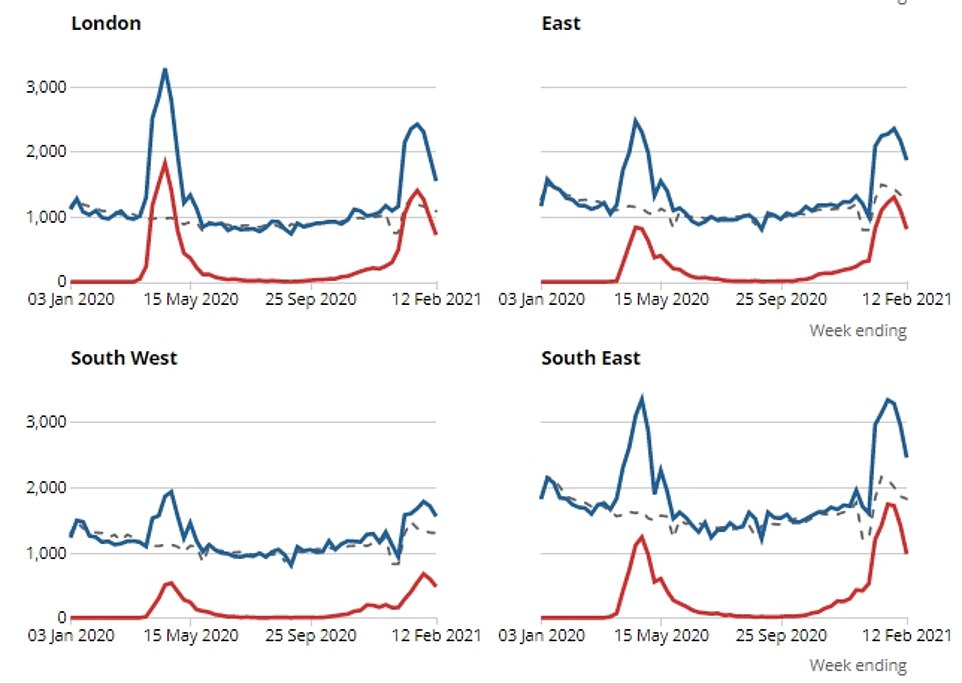 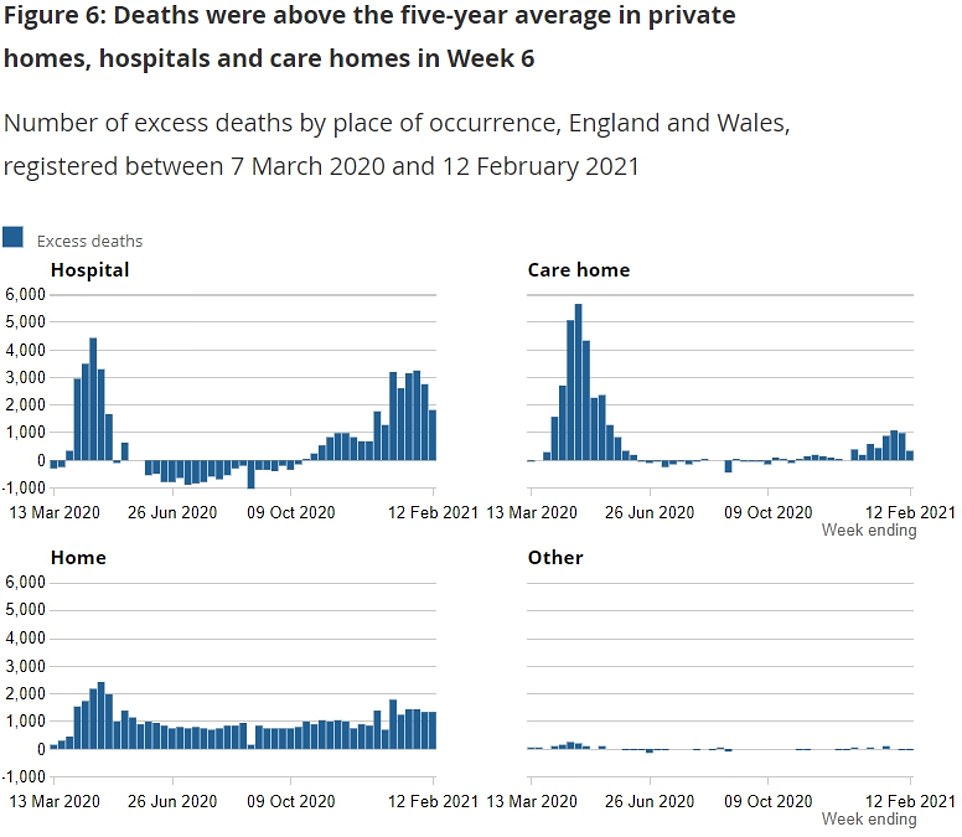 ONS data showed Covid fatalities fell in every region of England compared to the previous week, and none recorded more than 1,000 deaths from the virus for the first time this year.

These regions were the first to enter the harshest measures in the run-up to Christmas due to surging outbreaks of the more infectious mutant Kent variant. Others did not enter harsher measures until after the new year.

But in the East Midlands they declined by just one per cent compared to last week after 557 were recorded, compared to 564 the previous week.

Deaths from all causes also remained above the five-year average – the number of deaths that would be expected at this time – in all English regions, highlighting the death toll triggered by the virus and the disruption to routine healthcare after wards were turned over to handle Covid patients.