A once high-flying Perth multi-millionaire tech mogul will be extradited to the United States to face fraud charges relating to an alleged $130 million texting scam – one of the biggest telecom scams in American history.

Eugeni “Zhenya” Tsvetnenko has been held almost three years in a West Australian jail while trying to fend off the extradition after his repeated attempts to get bail were denied. 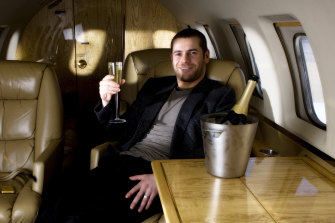 Perth-based entrepreneur Eugeni ‘Zhenya’ Tsvetnenko will be extradited to the US.Credit:AVWEST

But on Tuesday, Mr Tsvetnenko finally surrendered to the US authorities’ warrant for his extradition at the start of what was meant to be a three-day hearing before Perth magistrate Evan Shackleton.

The 41-year-old Russian-born father-of-two was raised in Perth and became a self-made millionaire – once considered the wealthiest person under 40 in WA, according to the BRW rich list – after inventing an automatic SMS delivery service more than 10 years ago.

In the early 2010s, he and his then-wife Lydia, a co-owner of Perth fashion label Zhivago, were regulars on the Perth social scene and known for living the high life – which included sports cars, a $1 million wedding and a Hollywood celebrity-filled birthday bash – on his estimated $100 million personal fortune.

In 2016, US authorities charged Mr Tsvetnenko over allegations of fleecing $US100 million dollars (about $134 million) out of mobile phone users out of monthly fees for unwanted, regular text messages through an “auto-subscribing” scheme. 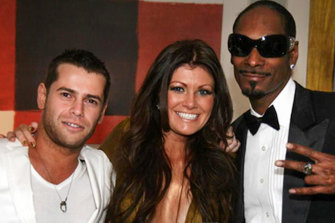 Eugeni ‘Zhenya’ Tsvetnenko and Lydia Tsvetnenko, who is not accused of any crime, party with rapper Snoop Dogg.

The alleged scam took place between 2011 and 2013 and involved sending unsolicited text messages that contained horoscopes, trivia and celebrity news.

Recipients were billed $13 a month for a service they never subscribed to despite ignoring or deleting the messages.

Mr Tsvetnenko has repeatedly denied the allegations and took his bail fight to the High Court of Australia but was denied a hearing. His wife is not accused of any wrongdoing.

The US Attorney’s Office said funds from the alleged text scheme, which involved multiple people, were used to “fund a lavish lifestyle of expensive vacations and gambling”.

Michael Pearse, 52, from Sydney, and Yongchao “Kevin” Liu, 33, a Chinese national living in Sydney, were flown to the US in January to face charges relating to conspiracy to commit wire fraud, wire fraud and aggravated identity theft.

Mr Pearse also faces charges relating to laundering the proceeds of the scheme. They face 20 years in prison if convicted.

The three Australian residents are accused of being a part of an international telecommunication fraud ring, with six other members having already faced a New York court. 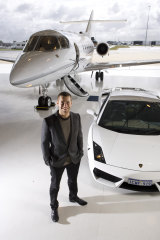 Russian-born Zhenya Tsvetnenko was once the wealthiest person under 40 in WA.Credit:AVWEST

US mobile phone industry executive Fraser Thompson was sentenced to five years jail after being convicted by a Manhattan Federal Court in September 2017, while his former employee Francis Assifuah was sentenced to 33 months prison after pleading guilty.

Mr Tsvetnenko ran at least two different digital content providers in Australia that offered premium SMS services to mobile phone customers. Those services were unrelated to the allegations he faces in the US.

The alleged scheme involved a co-conspirator who ran a content provider deciding to auto-subscribe mobile users to premium SMS services in order to boost his company’s sagging revenues.

Prosecutors alleged the unnamed businessman needed a way to make it appear that consumers who were illegally auto-subscribed had actually agreed to be billed for the premium SMS service.

He allegedly approached Mr Pearse and Mr Liu and asked them to build a computer program that could spoof the required consumer authorisations or, in effect, a program that could generate the text message correspondence that one would ordinarily see with genuine opt-in verifications.

Mr Pearse and Mr Liu allegedly agreed to build the program which was operational by 2011.

Mr Pearse was allegedly paid his share of the proceeds via several nominee companies he controlled located in the US, Hong Kong, Australia and New Zealand.

It is alleged Mr Tsvetnenko was approached in 2012 by other participants of the scheme. He had already been involved in suspicious subscription practices, court documents alleged.

By April 2012 Mr Tsvetnenko had started auto-subscribing hundreds of thousands of consumers in the US, and they quickly started generating millions of dollars of revenue.

Mr Tsvetnenko reportedly arrived as a 12-year-old from Russia with his biochemist parents Yuri and Elena in 1992. The family only had two suitcases and $6000 – the proceeds of the sale of their apartment in Russia – to start their new life.

When Mr Tsvetnenko made his $100 million fortune, he told his wife to quit her job and travel the world with him.

Mr Tsvetnenko will continue to be held in custody until his extradition is finalised.

Walmart to launch delivery service for other businesses
Technology