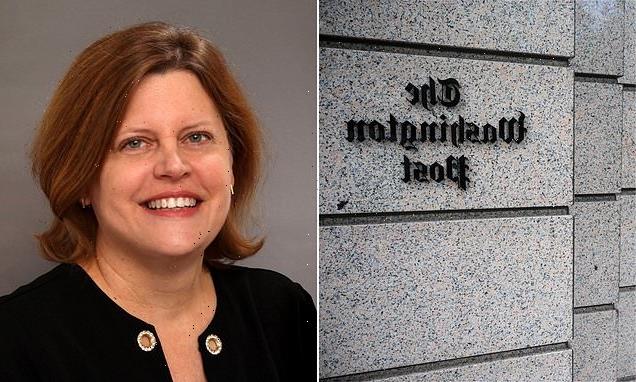 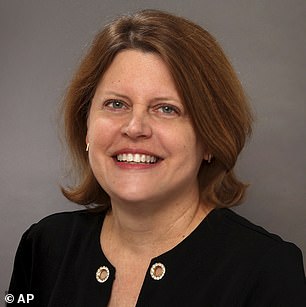 Sally Buzbee, 55, is the first woman to be named editor of the Washington Post newspaper

The Washington Post named Sally Buzbee, a veteran journalist with the Associated Press, as executive editor on Tuesday, the first time a woman will head the newsroom of the prestigious newspaper.

Buzbee, 55, has spent her entire career with the US news agency and is currently the AP’s executive editor and senior vice president.

Buzbee, a former Washington bureau chief for the AP, replaces Martin Baron, who retired in February after eight years at the helm of the newspaper.

Buzbee will be the first woman to serve in the top editorial position at the Post since it was founded in 1877. Previous executive editors include Ben Bradlee of Watergate fame.

Many staff at the Washington Post welcomed the appointment as its first female editor.

But the paper’s former star reporter Wesley Lowery, an outspoken critic of Baron’s, slammed the decision to overlook Kevin Merida, who was named executive editor of the Los Angeles Times earlier this month.

‘The overqualified black candidate not even getting a serious call about the job, only for it to go to a white lady and be framed as a win for diversity is the entire story of newsroom diversity efforts,’ Lowery, a 60 Minutes correspondent, posted on Twitter. 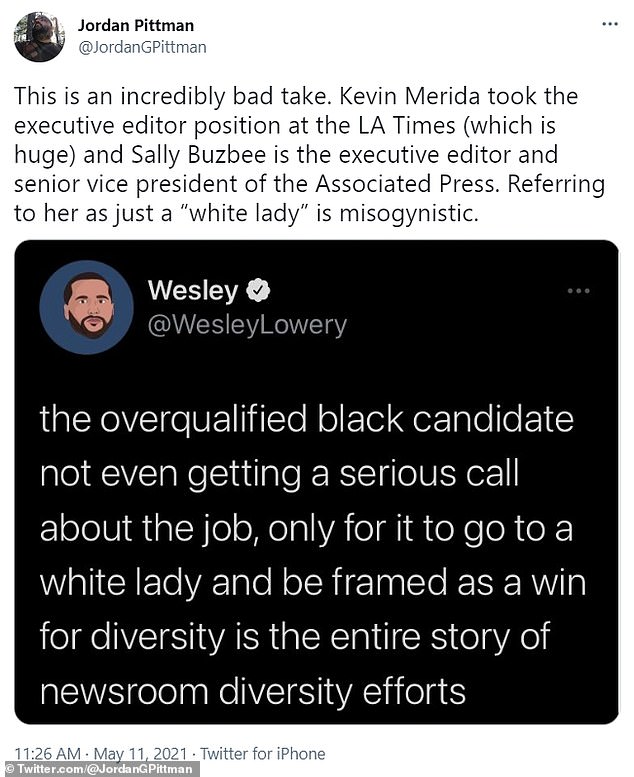 Buzbee’s former colleague at the Associated Press, Washington Bureau Chief Julie Pace, wrote that she was ‘bursting with pride’. ‘There is simply no better newsroom leader and mentor than Sally’ 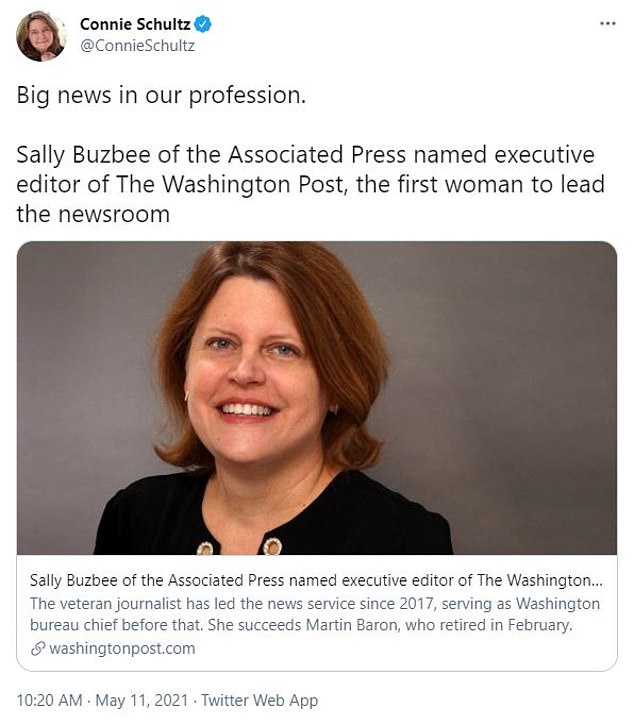 Jennifer Palmieri, co-host of The Circus on Showtime, tweeted: ‘Wow – I love the Washington Post doubling down on commitment to hard news with appointment of Sally Buzbee as EIC. So many I know from AP who deeply revere her’

Lowery, who is black, had previously written in an opinion piece for the New York Times that Baron had pushed out black and brown journalists while accepting the ‘views and inclinations of whiteness’.

Baron, the recently-departed Post editor, is widely credited with returning the paper to its 1970s heyday.

But as he turned the Post into a digital powerhouse and rival to the New York Times, Baron also faced stinging criticism from some of the paper’s ‘woke’ staff for being tone deaf to brewing racial tension.

Writing on Salon.com, former Washington Post columnist Dan Froomkin  wrote that Baron had been ‘clueless, condescending and dismissive’ when confronted with criticism about his ‘hiring, coverage and newsroom conventions’.

Froomkin pointed to an exit interview Baron gave with Vanity Fair, in which he said Baron had been dismissive of efforts to make the paper more diverse.

A story published on the Daily Beast last week titled Inside the Hunt for the Washington Post’s Next Top Editor failed to even mention Buzbee as a contender for the role.

Having boasted of speaking with ‘seven knowledgeable people inside and outside the paper’, it listed seven contenders for the position, one of the most coveted in American journalism.

The article focused on Post national editor Steve Ginsberg, who is white, and New York Times assistant managing editor Marc Lacey, who is black, as strong possibilities, before throwing our the names of five other men.

It said Kevin Merida had been in the running for the role, before removing himself and being named to the top job at the LA Times.

The Post has announced plans to open new bureaus in Sydney and Bogota for a total of 26 outside the United States.

Buzbee is the first executive editor hired by the Post since Amazon founder Jeff Bezos purchased the newspaper in 2013 from the Graham family.

‘The Post has such a rich journalistic legacy, and such a terrific staff,’ Buzbee told the Post in an interview.

‘It’s exciting to join this organization at a time of growth and innovation.’

Publisher Fred Ryan, who announced the hiring, said the newspaper had ‘looked for someone steeped in the courageous journalism that is The Post’s hallmark, and who can extend our reach to news audiences in the US and abroad.’

Buzbee, a graduate of the University of Kansas William Allen White School of Journalism & Mass Communications,  joined AP in 1988 as a reporter in Topeka, the Kansas state capitol.

She worked as a correspondent in San Diego before joining AP’s Washington bureau in 1995.

She went on to various senior leadership positions at AP including Middle East director and Washington bureau chief, and oversaw the team that won a Pulitzer Prize for investigative reporting in 2012 for its deep dive into the New York police department’s surveillance of Muslims.

As executive editor at AP, she oversaw the news service’s global operation, which includes journalists in more than 254 locations in 100 countries.

‘She was a guiding force for me at AP and someone I deeply admire. Congratulations Sally.’

Buzbee’s former colleague at the Associated Press, Washington Bureau Chief Julie Pace, wrote that she was ‘bursting with pride’. 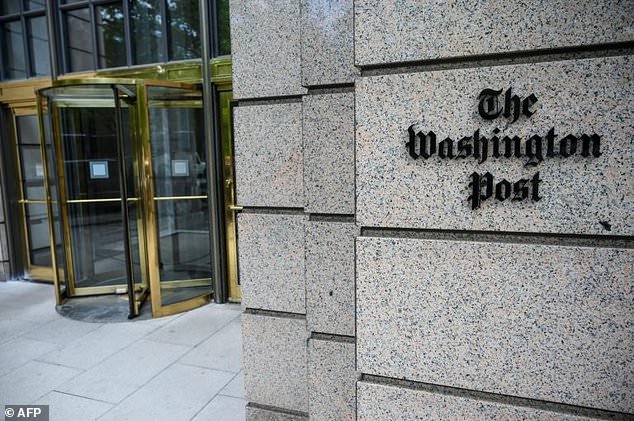 The Washington Post has named veteran AP journalist Sally Buzbee as executive editor, the first time a woman has held the position

‘One other thing about Sally Buzbee: she’s an amazing mom and role model for other working moms in journalism. Her kids were a presence in the newsroom, she took their phone calls, told stories about them. That meant a lot to me and other women in the AP Washington bureau.’

Ben Smith, media columnist at the Post’s old rival the New York Times, said Associated Press’s ability to remain free of controversy may have been a factor in her hiring.

Jennifer Palmieri, co-host of The Circus on Showtime,  tweeted: ‘Wow – I love the Washington Post doubling down on commitment to hard news with appointment of Sally Buzbee as EIC. So many I know from AP who deeply revere her.’

Buzbee has two daughters, while her husband, John, a Foreign Service office died in 2016 at the age of 50 of complications from colon cancer.

On Monday, Teen Vogue announced it was hiring Versha Sharma, 34, as editor-in-chief in less than two months after its last new hire was forced to resign following backlash over racist tweets she wrote as a teenager.

The Washington Post is best known for breaking the Watergate story about former President Richard Nixon’s overseeing a June 1972 break-in at the headquarters of the Democratic National Committee.

Nixon was eventually forced to resign over the scandal, which was broken by the paper’s legendary investigative reporters Bob Woodward and Carl Bernstein.

Mitt Romney reportedly accosted Josh Hawley over the Capitol riot: 'You have caused this!'