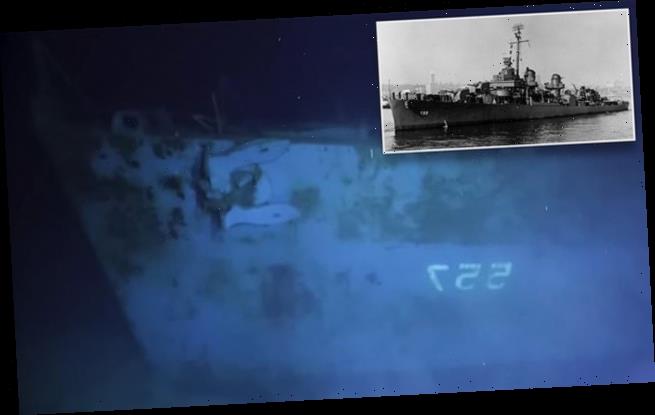 US crew has reaches the World's deepest ever shipwreck at 21,180ft

The deepest ever shipwreck has now been fully mapped and filmed after a US crew was able to reach the site at 21,180ft in the Philippine Sea.

The WWII destroyer USS Johnston was annihilated 75 years ago in the Pacific during the largest naval battle in history, sinking nearly four miles to the bottom of the ocean.

The ship was discovered in 2019, but it was not until now that a team has been able to fully map the wreckage, which is more than 100 feet deeper than previously believed.

A submersible piloted by Caladan Oceanic, a US-based private company that focuses on undersea expeditions, reached the shipwreck in the darkness of the seabed on March 31. The expedition now holds the record of being the deepest shipwreck dive in history. 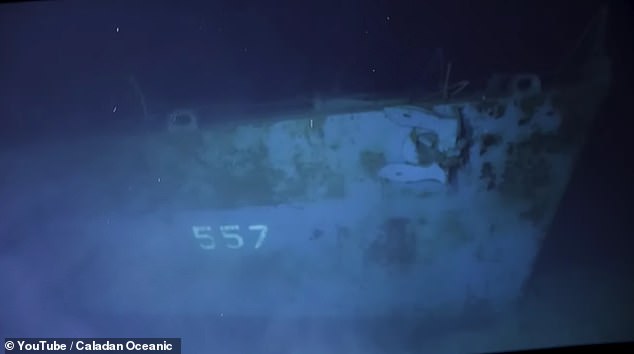 During a series of dives, the former US Navy officers were able to relocate the USS Johnston and then spent several hours surveying and mapping the remains of the 115m long ship.

Victor Vescovo, the American private equity investor, retired naval officer, and undersea explorer who led the expedition, spoke to the BBC about the challenges in locating the shipwreck.

‘The wreck is so deep so there’s very little oxygen down there, and while there is a little bit of contamination from marine life, it’s remarkably well intact except for the damage it took from the furious fight,’ he explained.

The explorer added that the hull number 557 was clearly visible on both sides of its bow, and other parts of the ship were also still fully intact.

‘The gun turrets are right where they’re supposed to be, they’re even pointing in the correct direction that we believe that they should have been, as they were continuing to fire until the ship went down,’ Vescovo said.

‘And we saw the twin torpedo racks in the middle of the ship that were completely empty because they shot all the torpedoes at the Japanese.’ 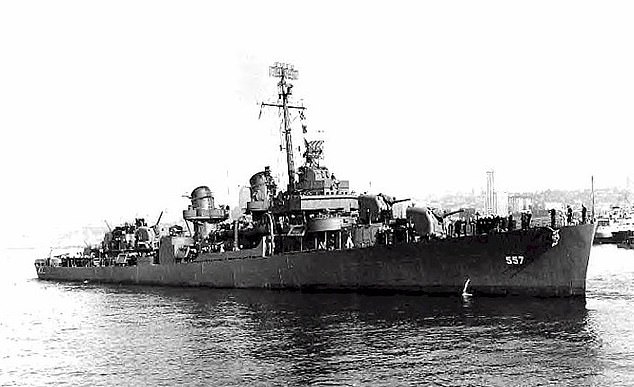 The USS Jonston was sunk on October 25, 1944, after she was outnumbered and outgunned in a brave advance against the Imperial Japanese Navy

The USS Johnston was discovered in the Philippine Sea, 75 years after it was sunk by the Japanese on October 25, 1944 in the Battle off Samar, an engagement in the Battle of Leyte Gulf.

Experts from the Research Vessel Petrel, owned by Microsoft co-founder Paul Allen, had previously released video of the battered and twisted hull lying eerily on the ocean floor.

Of the 327 US naval personnel aboard the USS Johnston, just 141 survived. Of those who died, around 90 were alive in the water as the ship sank but never seen again. 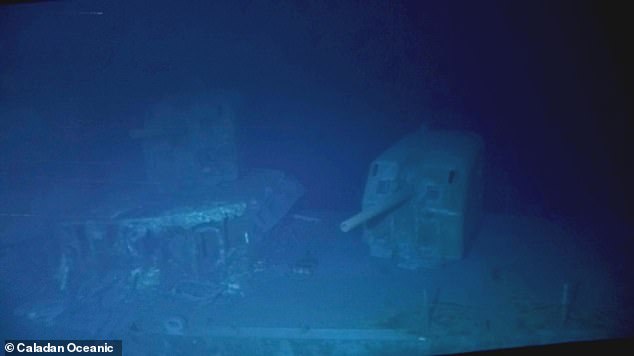 Victor Vescovo, who led the expedition, said the gun turrets are right where they’re supposed to be, pointing in the correct direction as they were continuing to fire until the ship went down 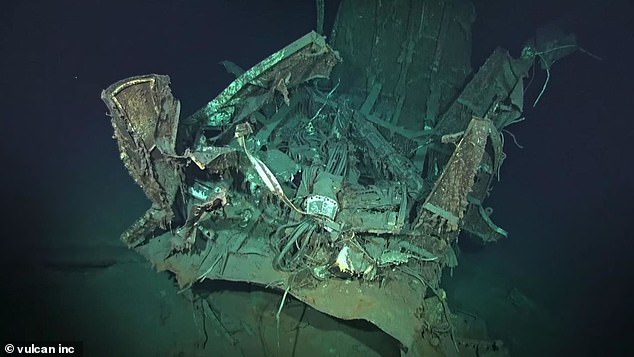 ‘There is no hull structure intact that we can find. This wreck is completely decimated, it is just debris,’ the crew revealed in 2019.

‘This wreck is either the Johnston or the Hoel… This wreck is in the southern part of where the battle took place and this is one of the reasons why we believe this is the Johnston, because she sank later, after Hoel did.’

The vessel is famed for her brave action in the Battle off Samar. Outgunned by the Japanese, USS Johnston led an attack of a handful of lightships against a colossal fleet until it was surrounded.

According to the US Navy: ‘One by one, Johnston took on Japanese destroyers, although Johnston had no torpedoes and limited firepower. After two-and-a-half hours, Johnston – dead in the water – was surrounded by enemy ships. 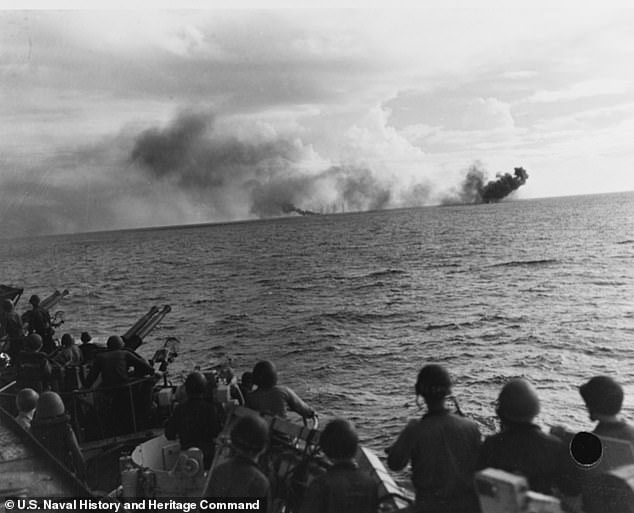 The Battle off Samar in which the USS Johnston is famed for her brave action, leading an attack of a handful of lightships against a colossal fleet until it was surrounded 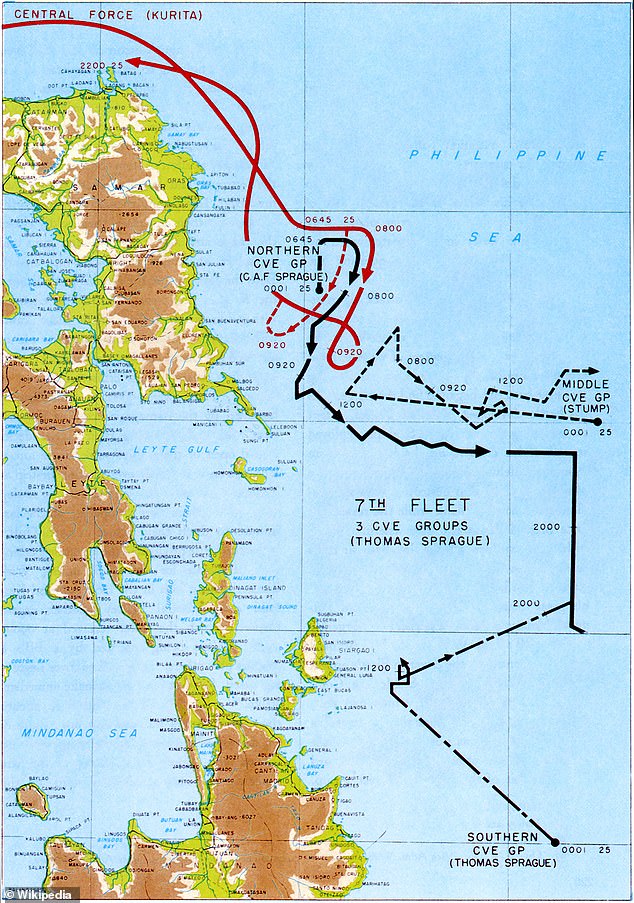 Movements during the Battle off Samar on October 25, 1944, it is cited as one of the greatest last stands in naval history

‘At 9.45 am, Evans gave the order to abandon ship. Twenty-five minutes later, the destroyer rolled over and began to sink.’

Her action in the battle was central to the overarching Battle of Leyte Gulf, considered to be the largest naval battle in history with more than 200,000 personnel.

The Imperial Japanese Navy rallied nearly all of its major naval vessels in the fight, in which the US and Australian forces intended to invade the islands in Southeast Asia through which Japan derived industrial strength.

The Allies were successful in defeating the Japanese warships despite kamikaze attacks raining down from the sky.

It is often cited as one of the greatest last stands in military history.

According to Guinness World Records, the deepest wreck before the USS Johnston was a German vessel discovered at 18,904ft.

The Battle of Leyte Gulf, fought in waters surrounding the Philippine islands of Leyte, Samra and Luzon, took place from 23-26 October 1944.

It involved 200,000 naval personnel, the Allied forces of the US and Australia against Japan, and spanned over 100,000 square miles of sea.

It was one of the decisive battles of the war, savaging the Imperial Japanese Navy and paving the way for the American invasion of the Philippines, a key industrial and strategic asset of Japan.

The battle was preceded a few days prior by the US amphibious assault on the island of Leyte.

Japan responded with Sho-Go (‘Victory Operation’), intended to lure the Allied covering forces away from the island and then strike at the landing site once it had been exposed.

Vice Admirals Shoji Nishimura and Kiyohide Shima were to strike the landing area via the Surigao Strait and the ‘Center Force,’ commanded by Vice Admiral Takeo Kurita, would travel south through the Philippine Sea to make its approach.

Submarines from the US Seventh Fleet spotted the approach of the first Japanese fleet and sank two heavy cruisers on October 23.

There followed three days of uninterrupted surface and air combat.

The practice of deploying kamikaze suicide airmen was most intense from the beginning of Leyte Gulf until the end the war.

The battle decimated the Japanese and crushed the strategic threat of its Philippine territory, a particular catastrophe being the loss of oil needed to fuel its war machine.

Admiral Mitsumasa Yonai, the Naval Minister, remarked that the defeat at Leyte Gulf was ‘tantamount to the loss of the Philippines.’

And of its broader significance, he said: ‘I felt that it was the end.’

Our final video from the Battle off Samar. Rob Kraft and Paul Mayer discuss the likelihood that this ship is the USS Johnston DD-557.