A tourist was killed in the crossfire of a Kalashnikov gangland shooting at a petrol station in France that left two others dead.

A couple using a hired scooter while on holiday in the South of France were sprayed with bullets as they passed the AK-47 shooting in which three people died.

One of the pair – a woman whose nationality is not known – was among the deceased in the bloodbath at a petrol station in Ollioules, near Toulon, on Sunday.

Two men were also killing in the gun attack at around 8pm last night.

The shootout also claimed the life of the 57-year-old woman who was a passenger on a scooter and is believed to be an innocent victim caught in the crossfire, police said.

The men who died in the 8pm shooting were aged 29 and 30, and both had criminal records, while the woman was 57.

Other men were seen running away from the filling station, and police believe they were involved in the gunfight. None of those involved have yet been publicly identified. 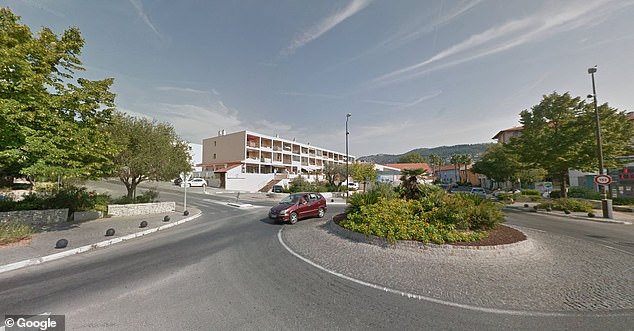 The woman and two men were killed during a gangland shooting at a petrol station in Ollioules, west of Toulon in the South of France

The couple had recently bought a second home in Ollioules, and had just started their summer holidays in France.

‘The couple was in the wrong place at the wrong time,’ said an investigating source. ‘They had hired a scooter and ended up in a gangland shooting.

‘The woman was hit in the back and died, along with two men who were known to police as being involved in the drugs trade.

‘The woman’s husband was driving the scooter and hit in the shoulder by a bullet, and is currently in hospital in Toulon. The woman was on the back of the scooter, and was hit from behind.’

Detectives today cordoned off the crime scene, where bullet holes could be seen everywhere.

Investigators said Kalashnikov assault rifles – which are easily available on the black market in nearby cities such as Marseille – had been used by the criminals.

Describing the ‘gangland culture’ in the area, Ollioules mayor Robert Beneventi, said: ‘I’ve been mayor for a long time, and I’ve seen things get worse.

‘We’ve been calling for police reinforcements for years. What goes on ends with tragedies that plunge families into misery.’

‘All means will be used to identify and arrest those behind the shooting in Ollioules,’ said Interior Minister Christophe Castaner on Twitter, expressing confidence in the police to ‘eradicate the criminal networks who corrupt our neighbourhoods.’

A police source said the profile of the two male victims – aged 29 and 30 and known to police over past drug cases – backed up the idea that the shooting was a settling of accounts between gangs.

The two gunmen escaped the scene.

The female victim was on a scooter driven by her husband, 58, who was wounded and taken to hospital. Local media said they were regular visitors to the area.

The Var department of southern France – a tourist magnet for its balmy Mediterranean climate – has seen a string of gangland-style shootings in the last months.

In March, notorious local crime figure Thierry Fornasari, who had been on the run since 2017, was shot dead in the town of Tanneron. Five days later a man aged 20 was gunned down in the same region.

Exchange Coin Hype: What Will You Miss Without BNX And BTCNEXT? Q DAO Engineering Overtaking The Market With The New Coin
Technology