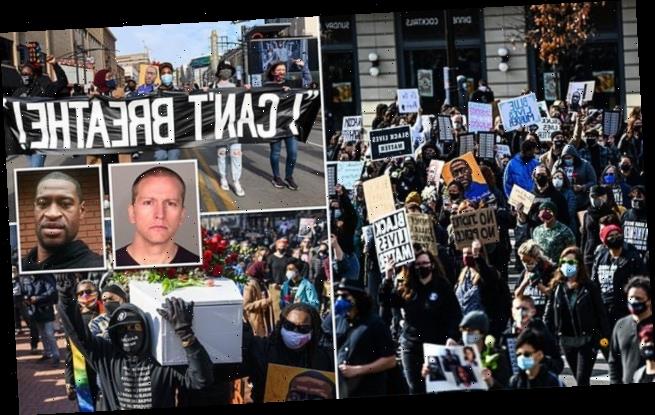 Thousands protest in Minneapolis ahead of Derek Chauvin trial

Thousands of protesters marched through the streets of Minneapolis on Sunday – the eve of the first day of ex-cop Derek Chauvin’s trial over the death of George Floyd.

The protesters followed behind a replica coffin covered in red roses as chants of ‘No Justice, No Peace’ rang through the city where Chauvin pressed his knee into the neck of Floyd for nearly nine minutes as he gasped for breath and pleaded for relief during an arrest on May 25, 2020.

Chauvin’s trial on charges of second-degree murder and manslaughter is slated to begin with jury selection on Monday morning in the Hennepin County district court.

Lawyers for both sides face the difficult task of finding jurors who, in the intensely publicized case, have not already made up their minds about Chauvin’s guilt.

The process is expected to take up to three weeks, with arguments slated to begin on March 29.

Minneapolis has been preparing for unrest surrounding the trial for weeks, calling in up to 2,000 National Guard members and 1,100 other law enforcement officers to patrol the streets.

Sunday’s protest marked the first of many anticipated in the coming weeks at the courthouse, which has been adorned with concrete barriers and barbed-wire fencing. 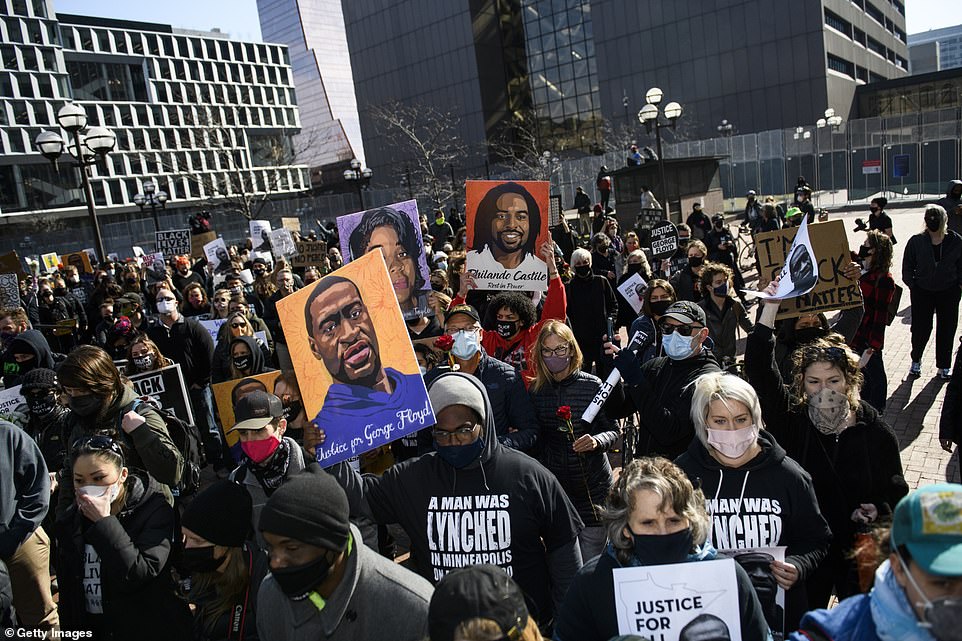 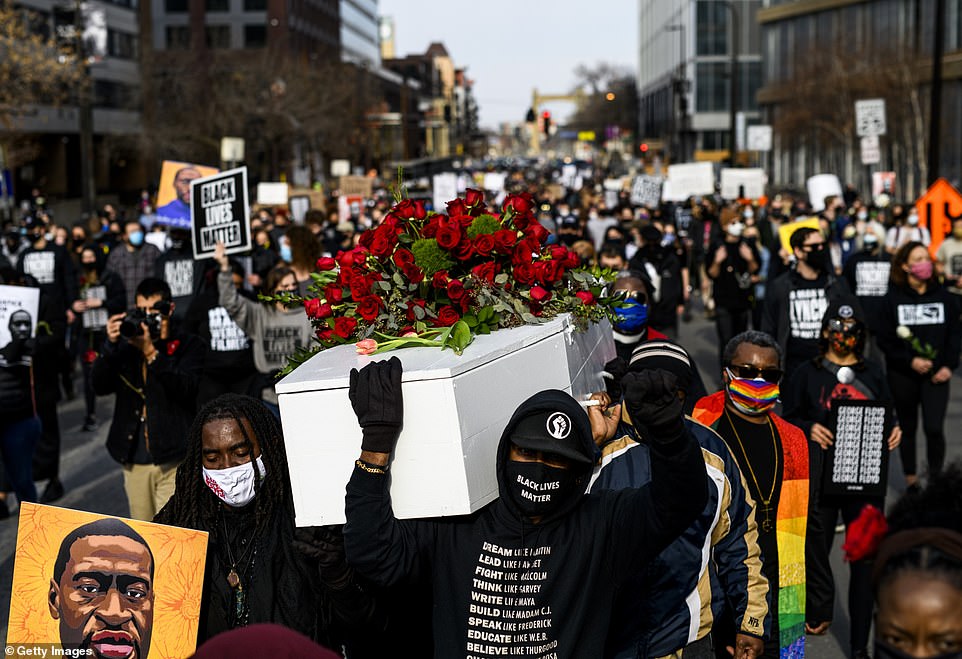 The protesters followed behind a replica coffin covered in red roses as chants of ‘No Justice, No Peace’ rang out 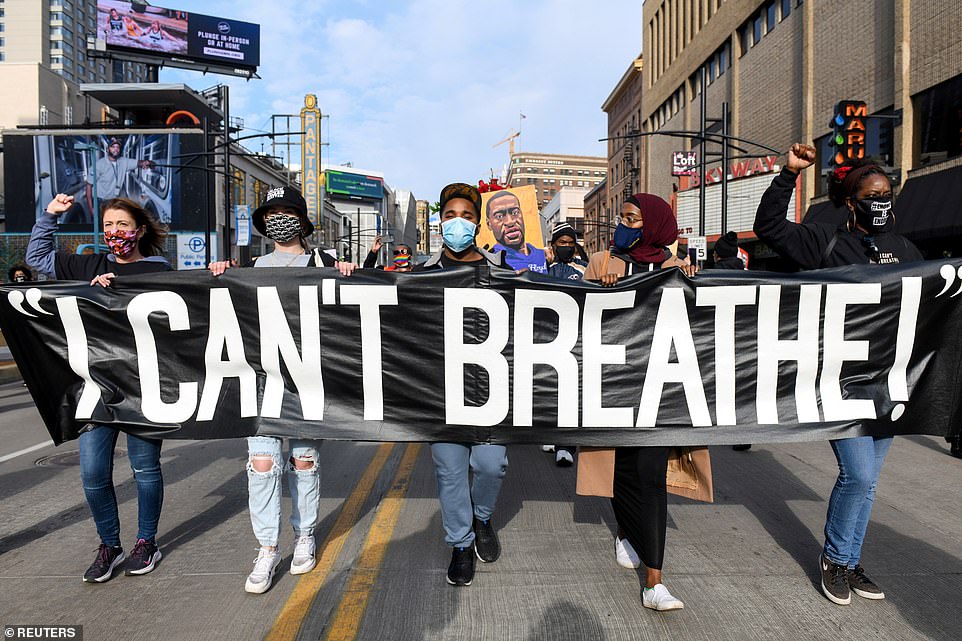 Protesters carried a banner with the words: ‘I can’t breathe’ – the same statement George Floyd made over and over as Chauvin pressed his knee into the black man’s neck for nearly nine minutes during an arrest on May 25, 2020 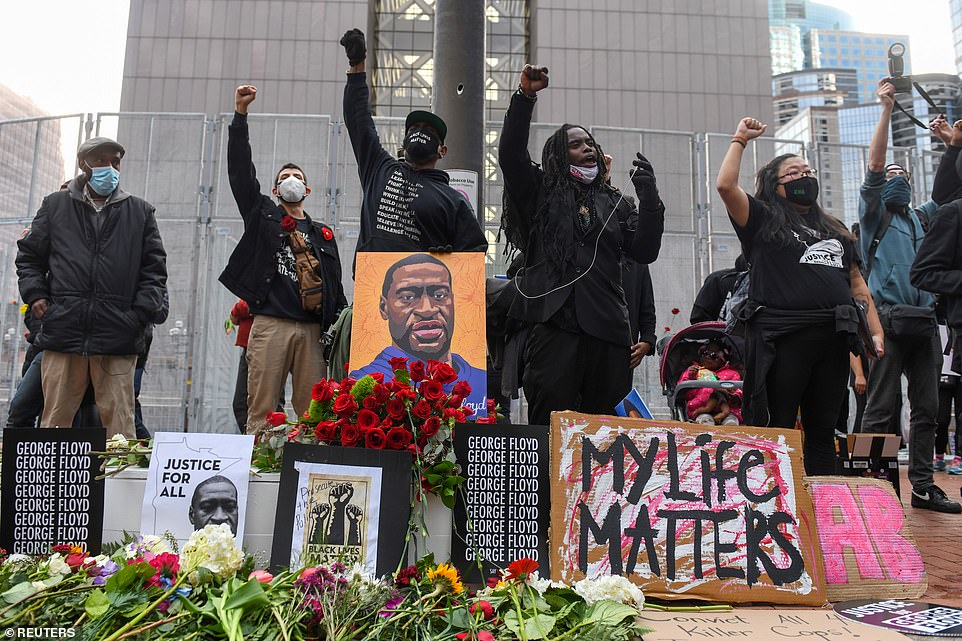 Protesters raise their fists and chant during the ‘I Can?t Breathe’ Silent March for Justice on Sunday in Minneapolis 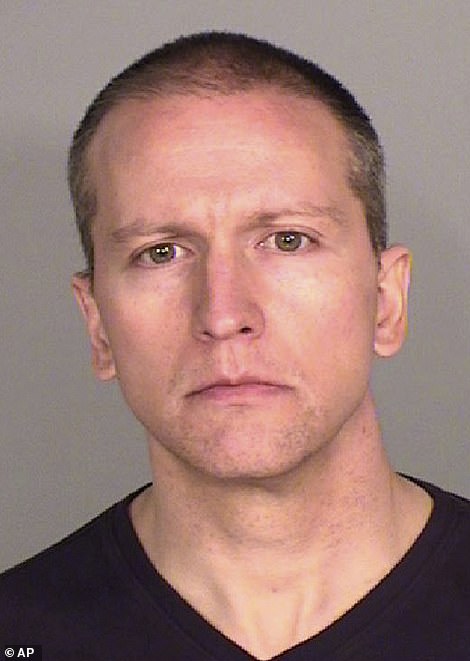 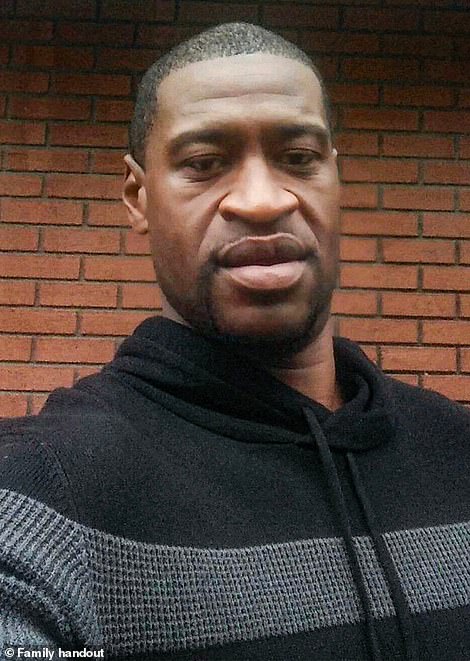 Many protesters Sunday said they worry that Chauvin will walk free, but warned that this would not come without consequences.

‘I hope that our legal system allows all evidence to be presented and that we get a conviction, but I don’t expect it,’ Billie Jean Vanknight, a 43-year-old Black woman, told AFP.

‘If he walks free, I want even more people on the streets,’ she added, saying his acquittal would have to serve as a ‘wake-up call’ and advocating non-violent responses.

‘People are afraid of changes,’ said Jacox, who is African-American.

Chauvin’s case promises to be extraordinary: it will feature star attorneys, be held under tight security and be livestreamed.

It will also be intensely watched as a potential marker of change in a country that recently elected its first Black vice president, but where police officers historically have often escaped punishment for abusive acts.

It will feature gripping testimony, as foreshadowed Sunday by Benjamin Crump, a prominent civil rights attorney representing the Floyd family. 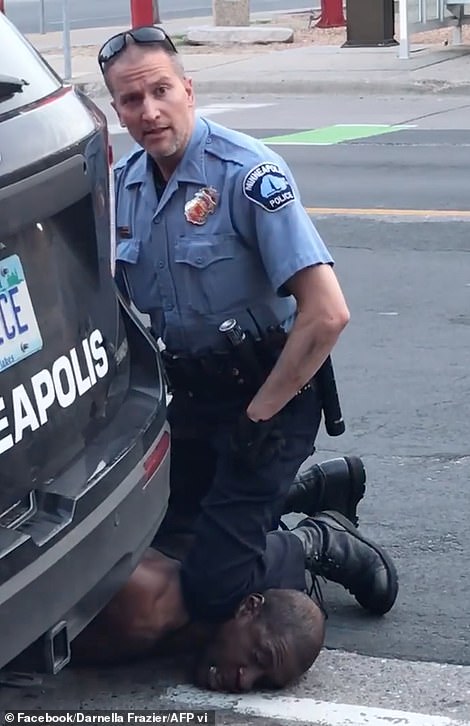 ‘The public is begging the police to take the knee off his neck. They say his nose is bleeding; he can’t breathe; he is going unconscious — you’re going to kill him.’

Amid the Covid-19 pandemic, social distancing rules mean seating will be limited, with the Floyd and Chauvin families allowed only one seat a day.

Despite intense global interest, only two reporters will be allowed in each day, with scores of others watching monitors from a nearby building.

The Minnesota attorney general’s office brought in Neal Katyal, a former US acting solicitor general who has argued cases before the Supreme Court, to help with the prosecution.

Ashley Heiberger, a former police officer who now works as an advisor on police practices, said: ‘The fact that a police officer has been charged criminally for an abusive use of force, that in and of itself is an outlier.’

‘It’s even rarer for them to be convicted.’

The circumstances surrounding 44-year-old Chauvin’s case, however, are so troubling that ‘to the best of my knowledge, no police officers or police organizations came out and defended his action,’ Heiberger said.

All four officers were fired by the Minneapolis Police Department.

Floyd’s arrest was prompted by accusations that he tried to pass a counterfeit $20 bill in a nearby store. 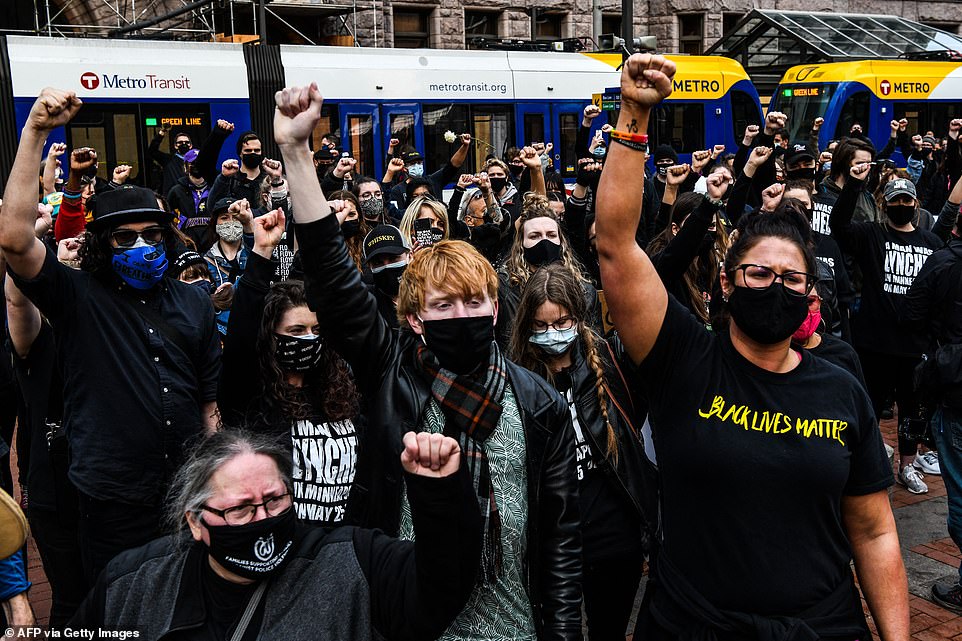 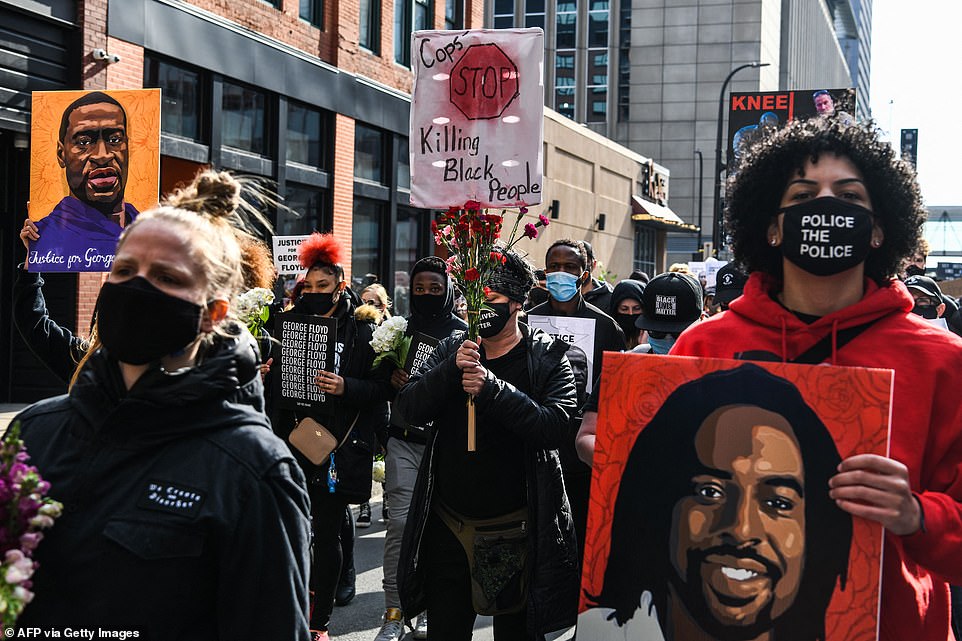 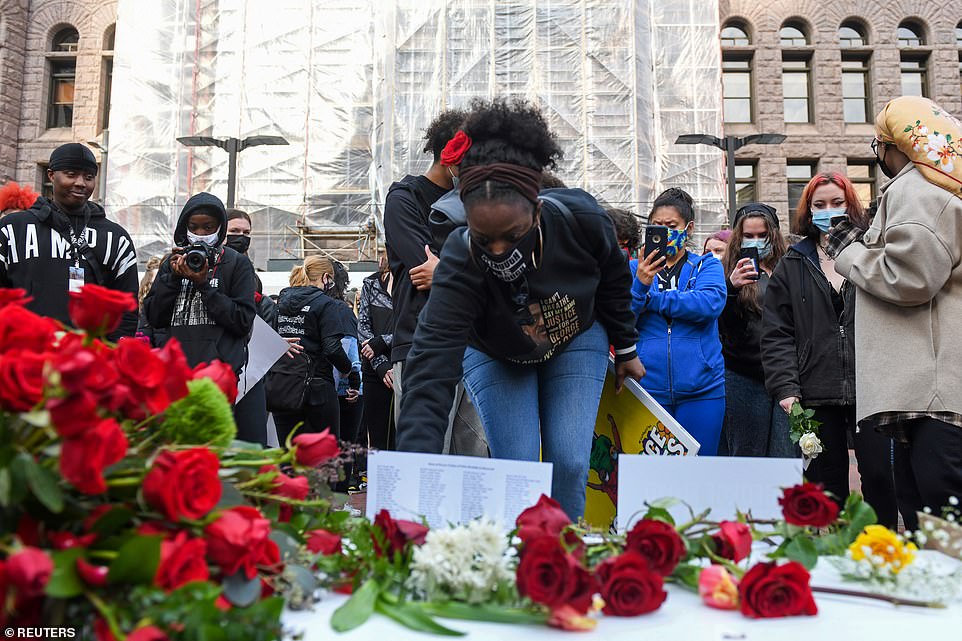 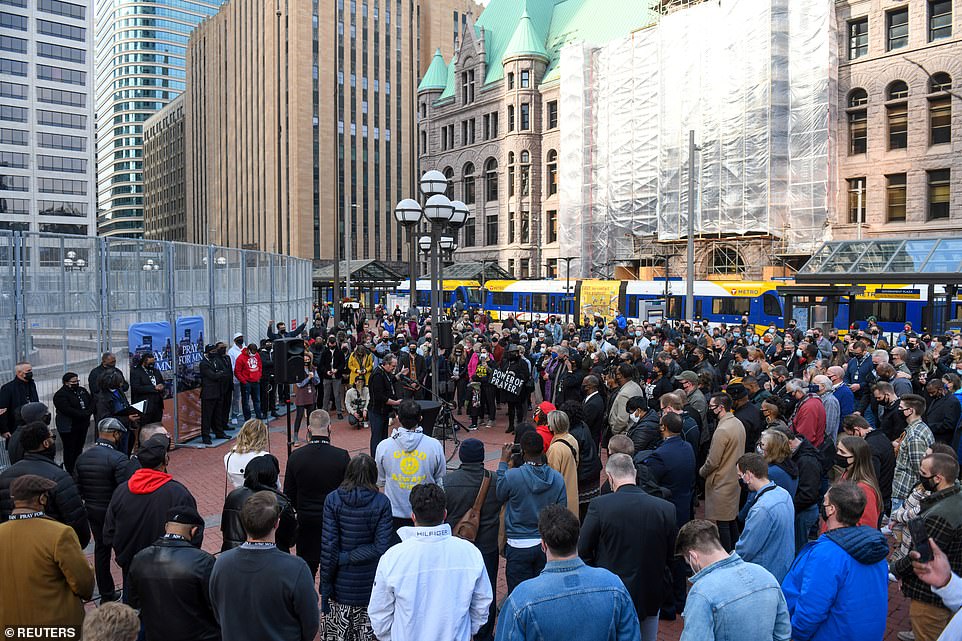 Chauvin, a 19-year veteran of the force, was released from prison on bail in the fall and is expected to plead not guilty to the murder and manslaughter charges.

‘Mr Chauvin acted according to MPD policy, his training and within his duties as a licensed peace officer of the State of Minnesota,’ said his lawyer, Eric Nelson. ‘He did exactly as he was trained to do.’

According to Nelson, Floyd died of an overdose of fentanyl.

An autopsy did find traces of the drug in Floyd’s system but said the cause of death was ‘neck compression.’

It will take a unanimous verdict by the 12-member jury to put Chauvin behind bars for what could be a long prison sentence.

A hung jury could give rise to another wave of anti-racism demonstrations.

The authorities have mobilized thousands of police officers and members of the National Guard to provide security.

The courthouse where the trial will take place currently resembles an armed camp, surrounded by concrete barriers and barbed-wire fencing.

Prospective jurors have been presented with a 16-page questionnaire.

‘How favorable or unfavorable are you about Black Lives Matter?’ is one of the questions.

‘Have you ever watched video of George Floyd’s death?’ is another. ‘If yes, how many times?’

A verdict is not expected until late April. 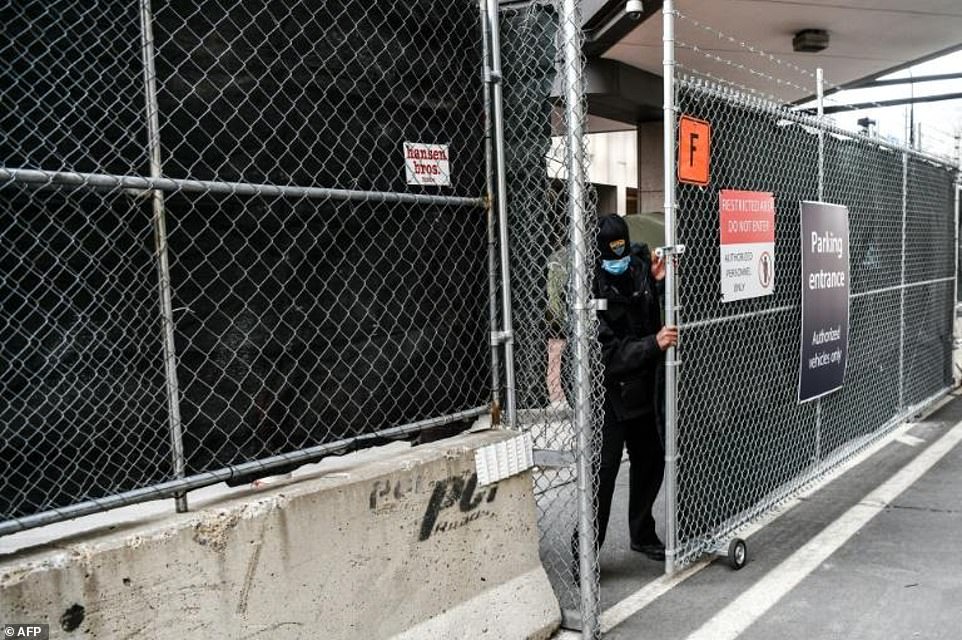 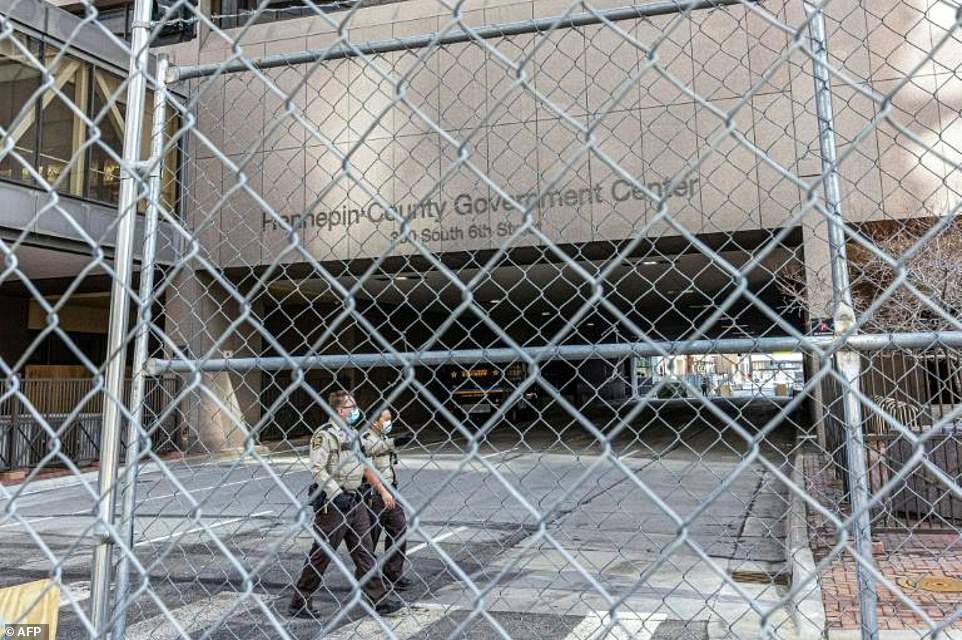 Tight security is in place ahead of the trial in Minneapolis, Minnesota, of the police officer charged with killing George Floyd