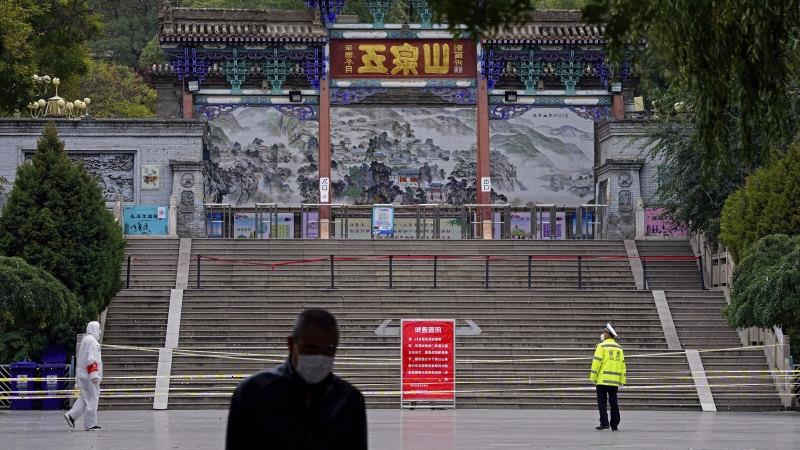 Singapore: Chinese authorities are scrambling to lockdown apartment blocks and towns as coronavirus cases pop up across the last country still pursuing a COVID-zero strategy.

The sudden restrictions come 100 days out from the start of the Winter Olympics and two weeks before a key Chinese Communist Party meeting in Beijing. 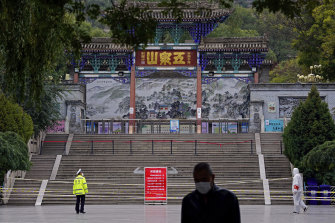 A worker stands at the entrance to Wuquan Mountain which is closed to prevent visitors gathering in Lanzhou city in Gasu province, north-west China, on Monday.Credit:Chinatopix/AP

Lockdowns have been re-imposed for thousands of residents across 11 provinces after more than 120 cases were disclosed in the past week. The case numbers are a fraction of those recorded in Europe, the United States or Australia, but China’s zero-tolerance approach has forced a sharp response from authorities.

Beijing residents have been told to avoid non-essential travel, access to tourist sites has been restricted and a marathon for 30,000 runners has been postponed. Apartment blocks where COVID clusters have sprung up have been put into strict lockdowns of up to 21 days. In one district a 20-year-old was arrested and put in detention for 10 days after he refused to scan a health code.

Beijing resident Xu Dongjie said thousands of people in her community of Baigezhuang had been blocked from leaving home since October 22 and were in a 21-day lockdown.

“Such strict control and prevention measures better fit in China than anywhere else,” Xu said. “Because population intensity in Chinese cities is so high, the consequences without timely and effective control and management are unimaginable.”

Xu said her family would get all of their food delivered and her children would learn at home.

“My children can’t go to school and because it happened all of a sudden, their teachers could not arrange online classes,” she said. “So now I act as the teacher of Chinese, math, physics, and English, although I’m not good at them.”

Similar restrictions are now set to fall on pockets throughout the country as infections flare up from Inner Mongolia in the north to Hunan in the south.

Medical workers in hazmat suits have also been seen outside Beijing’s Changping district where 23,000 people have been placed in lockdown, an unfamiliar sight in China since the early months of the pandemic. 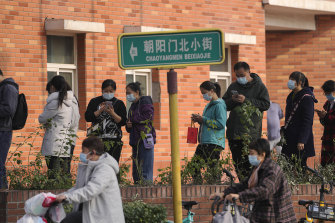 Masked residents line up to receive booster shots against COVID-19 at a vaccination site in Beijing on Monday.Credit:AP

The government is expected to maintain its COVID-zero strategy in the mainland and Hong Kong despite its neighbours and all major economies moving to a “living with COVID” strategy.

Authorities are also on alert for any disruption to the sixth plenum of the Chinese Communist Party’s Central Committee. The annual meeting starts on November 8 and will focus on the party’s role in the country’s history, according to Chinese State Media.

Eliminating the coronavirus is expected to be a key achievement that President Xi Jinping takes to the National People’s Congress next October as he seeks a third term in power. 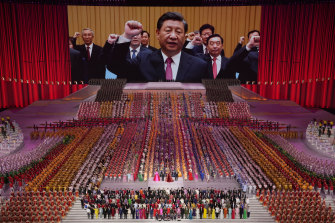 Xi Jinping at the 100th anniversary of the Chinese Communist Party in Beijing in June.Credit:AP

The Winter Olympics in February will only allow domestic fans and all participants will be put into a “closed loop” bubble for the duration of the Games, with compulsory vaccines and daily testing, according to an Olympics playbook released on Tuesday.

The COVID-zero measures will also apply to the global financial hub of Hong Kong, frustrating companies that have called for relief from the 21-day quarantine period for business travellers.

Hong Kong Chief Executive Carrie Lam said on Tuesday she was not concerned and was “full of confidence about Hong Kong’s future”.

“This is to give confidence to the central authorities that it is safe to open the border,” she said.

Children as young as three will start to receive the Sinovac and Sinopharm shots this week as older residents receive their booster shots to protect against the more infectious Delta variant.

But another disease is also starting to raise concerns among medical experts. China reported 21 human infections with the H5N6 subtype of avian influenza this year to the World Health Organisation compared with only five in 2020. The number is lower than the previous strain H7N9 in 2017, but the infections are more serious and have caused at least six deaths. Other patients have become critically ill.