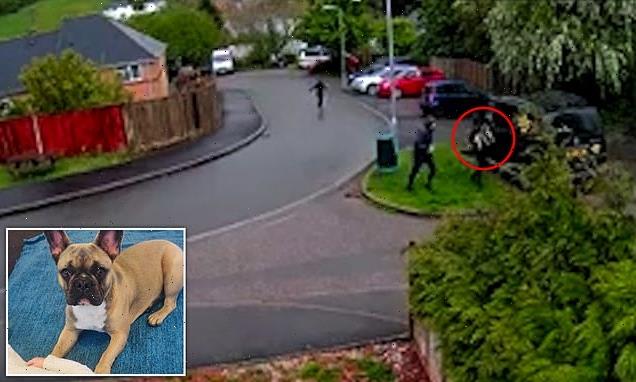 This is the moment brazen thieves climbed over a garden fence to snatch a family’s dog.

The three men were caught on a neighbour’s CCTV fleeing with 20-month-old French bulldog Maggie in a quiet residential street in Bradninch, Devon last Thursday.

They were filmed entering the garden through a back gate before passing the dog over the fence and fleeing.

The three are believed to have got into a red Ford car that was waiting for them and was out of shot.

Maggie’s owner Chloe Jade, 22, told MailOnline the 18-month-old pet was a gift for her two-year old son, Ollie, who is now heartbroken at the dog’s disappearance.

She said: ‘Someone out there knows where she is. It is breaking my family’s heart to know she might be in danger.

‘We just want her home. All Ollie asks for all day is Maggie. We just want to make sure she’s safe. Ollie keeps asking ‘where’s Maggie?’ and saying ‘Maggie is gone’.

‘He doesn’t understand too much because he’s only young but he knows that she’s not here.’

Chloe, who lives with her boyfriend Charlie Jones, 24, and their other son, one-year-old Albie is offering up to £1,000  for the return of Maggie.

French bulldogs can fetch up to £2,000 for an adult and £4,000 a puppy, so it is thought that this is the motive behind the theft but Chloe says Maggie is useless to breeders as she is spayed.

Chloe added that the police have since told her they may have some information but have not disclosed what it is as yet.

She said she is feeling ‘hopeful’ the family will be reunited with Maggie.

The theft comes just days after the Government set up a taskforce to put a stop to ‘cynical and nasty’ pet theft.

Soaring demand for pets over lockdown is said to have led to a surge in criminals stealing dogs.

The taskforce will look into what contributes to the increase in thefts and recommend solutions.

Last year an estimated 2,438 dogs were reported as stolen in the UK, according to research by Direct Line Pet Insurance.

Stealing a pet is already a criminal offence under the Theft Act 1968, with offenders facing a maximum penalty of seven years in prison.

Environment Secretary George Eustice said: ‘Pets are much loved members of the family, and these reports will be distressing for all pet owners.

‘Pet owners shouldn’t live in fear so we’ve set up this taskforce to thoroughly investigate the issue and ensure that we have the measures in place to stop these criminals in their tracks.’

A spokesman for Devon and Cornwall police said: ‘Police are investigating the theft of a French bulldog from a garden on Hornbeam Gardens, Bradninch, at around 12.30pm, Thursday 13 May.

‘It was reported that three men jumped over the fence to get to the dog, which is black, brown and white.

‘Anyone who was in the area at the time and witnessed any suspicious activity, or has any information, for example CCTV footage, which could assist police enquiries, is asked to contact police on 101 or via email at [email protected] quoting crime reference CR/038549/21.

3 Creative Ways to Get Your Blockchain Project Funded