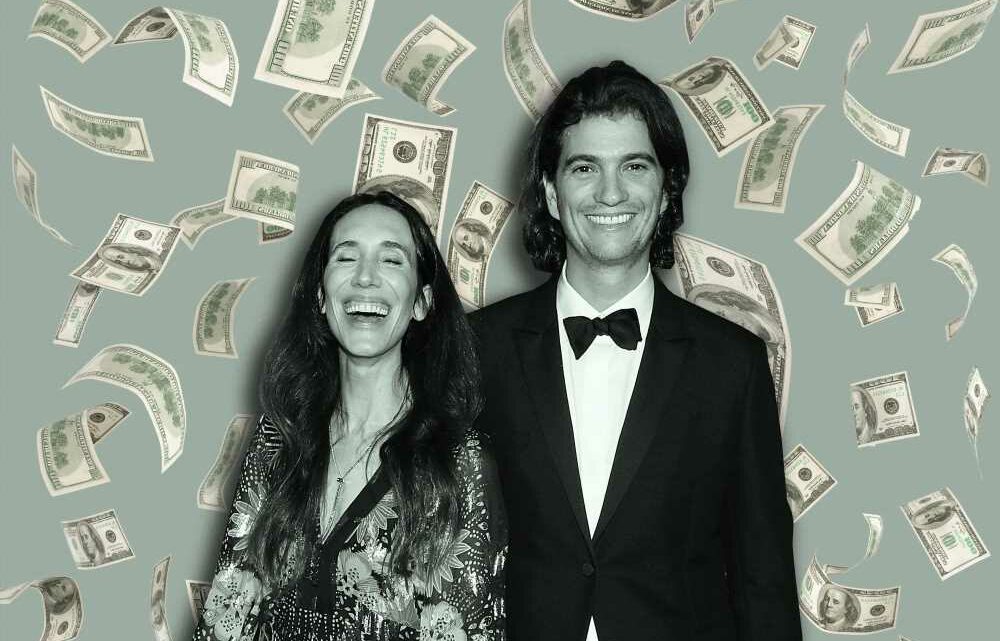 Adam Neumann came up at the right time: on the tail of the great recession when everybody wanted to be an entrepreneur and office space was available on the cheap.

After immigrating from Israel to New York City in 2001, he tried his hand at Krawlers — a line of baby clothing with padded knees — which flopped. When he co-founded the shared-workspace company WeWork three years later, it was with some of a $1 million wedding present he and wife, Rebekah, had received from her Long Island parents.

But Adam, now 42, was never exactly a nose-to the grindstone guy. As co-authors Eliot Brown and Maureen Farrell reveal in the book “The Cult of We: WeWork, Adam Neumann, and the Great Startup Delusion” (Crown), out Tuesday, expensive shortcuts appealed to Adam.

For example, he became obsessed with surfing, but found it a hassle to get to the big waves. “The way I surf, I don’t have time for paddling,” he told a colleague. Instead, he would hop on a chauffeured Jet Ski. As the book puts it, “Most surfers consider [this] cheating—like a mountain climber hopping a ride on a helicopter most of the way up.”

Some surf spots in Hawaii even forbid the practice, but Adam would hire local surf coaches who knew how to skirt regulations.

In the book, the Neumanns are portrayed as a pair of Marie Antoinette-like figures: living it up — partying on private jets, spending money like water and leaving employees to clean up their messes — while their world was beginning to crumble around them.

WeWork was founded in 2010 and thrived as a hot commodity before turning into a hopeless money suck for investors. Between missed opportunities and the erratic behavior of Adam, its CEO, WeWork became a shambles by 2019.

The book is packed with stories of his shocking managerial style.

WeWork senior executives requesting an in-person meeting might be asked to fly with Adam from New York to San Francisco at a moment’s notice. But then he was just as likely to make them wait for hours, leave before they arrived at the airport or simply not have time to talk to them on the six-and-a-half-hour flight.

Sometimes he abandoned them upon landing, leaving staffers to find their own way home. This mirrored his behavior on land, too. Adam would meet with staff and even interview prospective employees while riding around in his Maybach, a superluxury car costing more than $200,000 — then, when he was done, tell them to get out and ride in a separate “chase car” in his convoy.

According to the book, “One executive was shown the door in the middle of gridlocked traffic on the Long Island Expressway — instructed to find the chase car somewhere behind them in the traffic.”

For a personal trip to Israel, Adam borrowed a G650ER plane from Gulfstream as he was awaiting delivery of the WeWork private jet. After landing, the crew discovered a cereal box full of marijuana in a closet, presumably left for the return home.

As the authors write, “Smoking on board was one thing, but transporting marijuana — an illegal drug in New York and Israel — across borders … might expose Gulfstream to serious risks.”

Gulfstream pulled the jet, leaving Adam and his pals to find their own way home.
Adam and his cohort were notorious among private jet crews. After a chartered trip to Mexico City in 2015, the operator, Gama Aviation, complained to WeWork that “passengers were spitting tequila on each other”; one passenger became sick “throughout the cabin and lavatory,” requiring extra cleaning; and that the “crew was not tipped.”

VistaJet, the authors write, was frequently forced to deal with Adam’s onboard partying: taking jets out of service to clean up alcohol spills and vomit. On multiple occasions, the CEO or one of his companions tore down a curtain divider.

On one of Adam’s flights, there was so much marijuana smoke in the cabin that the crew felt the need to don oxygen masks.

Back on land, Adam’s wife, Rebekah, who is now 43, was telling interviewers that the couple “believe in this new ‘Asset Light’ lifestyle.”

It was a pretty rich statement.

Upon buying a $15 million Tudor-style home in Pound Ridge, NY, the Neumanns added 2,000 square feet to the existing 13,000 and reduced the nine bedrooms to five supersized ones. At the WeWork headquarters on Eighteenth Street near Sixth Avenue, Adam installed a secret exit, an “ice plunge” — a metal tub filled with ice water, meant to stand in to refresh one’s legs — and a “smoke eater.” A high-powered HVAC vent usually used in cigar bars to keep the air clear, Neumann’s smoke eater was for marijuana, according to the book.

It seemed like a fancy contraption for a man who, during meetings, would sometimes finish off meals prepared by his private chef by licking the plate clean.

When the Neumanns paid $34 million for a compound of apartments on Irving Place, a makeover was inevitable. They combined the fifth, sixth and seventh floors, demolishing interior walls on one floor to create a gargantuan master bedroom. (Buying so many units gave the couple control of the building’s condo board, meaning no stops to the renovation.)

But that was nothing next to their most desired customization.

Rebekah was scared of a 5G cellular antenna next to their apartment — afraid that electromagnetism from it could cause cancer. Her brother had died of cancer at 23, as had other close relatives, including her uncle Bruce Paltrow (the father of Gwyneth Paltrow). Despite there being little scientific research to back up concerns about 5G technology, Rebekah was adamant: The antenna had to go.

First, WeWork’s CFO Artie Minson, who had previously worked at Time Warner Cable, was asked to persuade Verizon or Sprint to find a new home for the antenna — despite him busily preparing WeWork for an IPO. Minson didn’t get far, so others in the organization were roped in.

Finally, it landed with Maria Comella, WeWork’s top public affairs and policy executive. She had been chief of staff to Gov. Cuomo and an aide to Chris Christie. But in the spring of 2018, she was tasked with calling up phone companies and pleading for her boss and his wife: Please move this antenna.

“We understand that the Neumanns got to a point where they found a way to buy out the cell carrier’s lease and would have been able to have it taken down,” co-author Eliot Brown told The Post. “But that happened right as things were imploding [at WeWork]. To the best of our knowledge, it did not come down.”

Meanwhile, Rebekah wasn’t happy with the education of their five kids. So in 2017, she and Adam created their own elementary school: WeGrow was housed at the WeWork offices in Chelsea. The curriculum included regular jaunts to the Neumanns’ Pound Ridge home, where the students picked produce and learned about farming. Tuition went up to $42,000.

But once again, the Neumanns treated their employees like serfs. Teachers would return on Monday to find trash on the floor and chairs in the wrong rooms — all because Adam and Rebekah had used the school for a dinner party. Educators would have to hurriedly clean up, and then, according to the book, “spend the first few days of the week reprimanding the Neumanns’ children and … their friends to observe rules regarding climbing on [structures] or swinging from them. The children would protest: ‘We were allowed to do that this weekend. Why can’t we now?’”

Rebekah would apologize, only for it to happen again. (The school closed in 2019 after the WeWork IPO floundered, but Rebekah bought the rights to the curriculum and hopes to relaunch WeGrow.)

One executive was shown the door in the middle of gridlocked traffic on the Long Island Expressway.

“Cult of We” on how Adam Neumann would meet in his car with staff, then dismiss them

There was one person who called BS on Adam’s hubris: Elon Musk.

Adam was hungry to work with the SpaceX and Tesla head on his plans for Mars, where Musk aspires to one day construct a habitable colony. After finally securing a meeting, Adam was kept waiting for hours before Musk gave him minutes to pitch his own idea for a community on the planet.

“Getting to Mars would be the easy part, Adam told [Musk]. Building community would be hard,” the authors write. “Musk, Adam later recalled to his staff, was unimpressed and lectured Adam about how getting there was, in fact, the hard part. Musk was an idol, yet he put Adam in his place … When Adam recounted the meeting to Rebekah, she told him it was a moment of humility he probably needed.”

He had faced a similar moment the year before, but it didn’t seem to faze Adam.

While in India to meet with investors about expanding WeWork to that country, Adam partied a little too hard the night before. The planned meeting time came and went as staffers waited in the hotel lobby for their fearless leader.

Finally, security was asked to enter the CEO’s room and check on him. Adam was passed out cold. The meeting missed, he instead spent the day recovering at a spa.

Things came to a head on Sept. 22, 2019, nine months after WeWork received its enviable $47 billion valuation. According to a story in the Wall Street Journal, which the book’s authors helped write, company directors planned to press Adam to step down.

Reasons cited included his drug use, eccentric behavior and delayed initial public offering of a company that burned through $2 billion in 2018 and thrived with the help of some $12 billion in venture capital money and debt.

One month later, Adam was out. His personal worth plunged from $10 billion to, Forbes reported, $750 million. (His fortune is now valued at more than $1 billion.)

According to the authors, he received more than $192 million in cash for walking away, as well as a revised stock award of around $245 million and permission to sell more than $500 million in WeWork stock.

He and Rebekah sold two of their eight homes and were seen in December 2019 at San Francisco International Airport — flying commercial. But one thing hasn’t changed.

As Adam spends his days surfing in Montauk, the authors write, “His squad was mostly gone, but he wasn’t completely alone. He was still paying someone to tug him out to the waves on the back of a Jet Ski.”