The courageous canines who dodged bullets during WWI

Dogs of war: The courageous canines who dodged bullets to reach injured soldiers in no man’s land, deliver messages and perform other vital tasks during WWI

Courageous pups who hunted vermin, located stricken soldiers in no man’s land, and delivered vital messages whilst dodging between shell bursts and bullets all played their part in the Great War as these remarkable photos prove.

Riding proudly on top of a horse, nonchalantly leading a victory parade, or resting its bandaged paws after serving a stint in the front-line trenches – dogs were never far away from the heat of battle in the First World War.

As a nation of animal lovers, it is perhaps no surprise that canine companions were so prolific along the dangerous, muddy trenches. 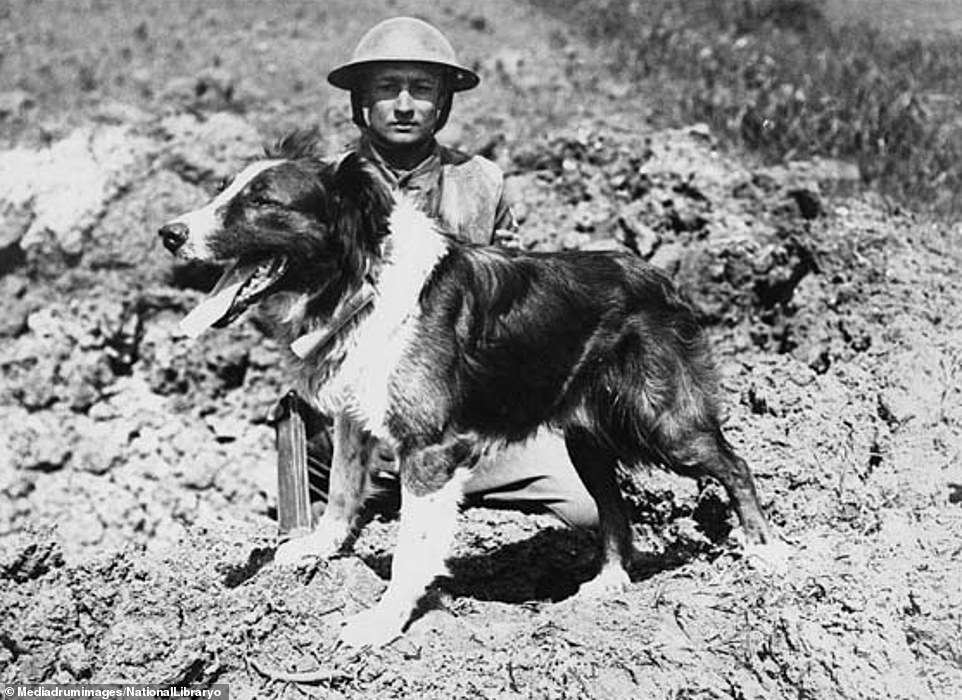 Pictured: This collie dog worked as a messenger in the front line under constant gunfire. A scrolled up message can be seen attached to the dogs collar 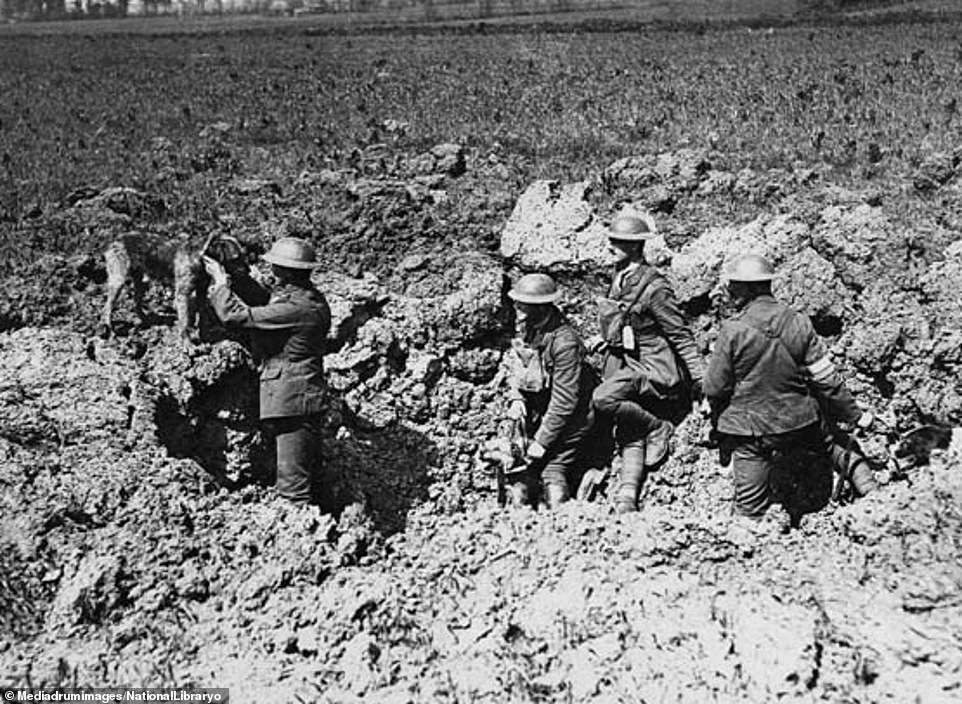 Pictured: Messenger dog bringing a message to soldiers in a shell hole in France during World War I 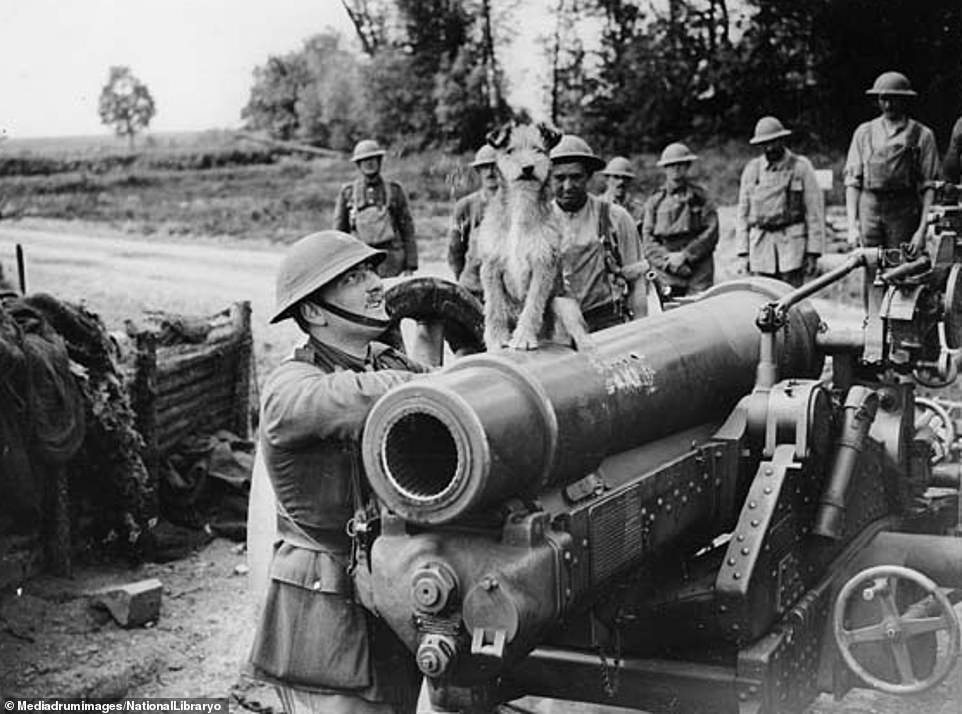 Pictured: Proudly perched on top of what looks like a howitzer, this pet dog was the regimental mascot of the artillery gunners also gathered around the gun

Offering camaraderie and a welcome remainder of domestic bliss amid the terrible death and destruction, dogs were often used as mascots to maintain morale throughout the war years.

The dogs also served other roles in the gruesome conflict – with some acting as messenger jobs between the British military headquarters and the frontline.

Others would be tasked with clearing the trenches of mice and rats and protecting the Tommies’ food stores; carrying food or ammunition; locating injured soldiers so they could receive medical aid; pulling carts and sledges; or acting as decoys or sentries. 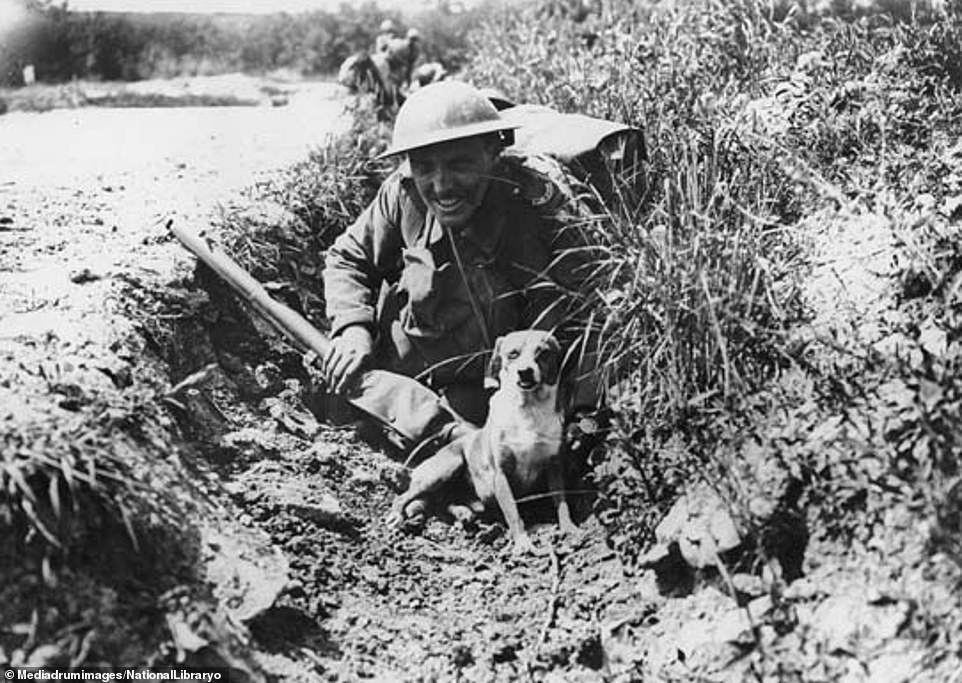 Pictured: A soldier of the East Lancashire Regiment is crouched in a shallow trench holding a small dog 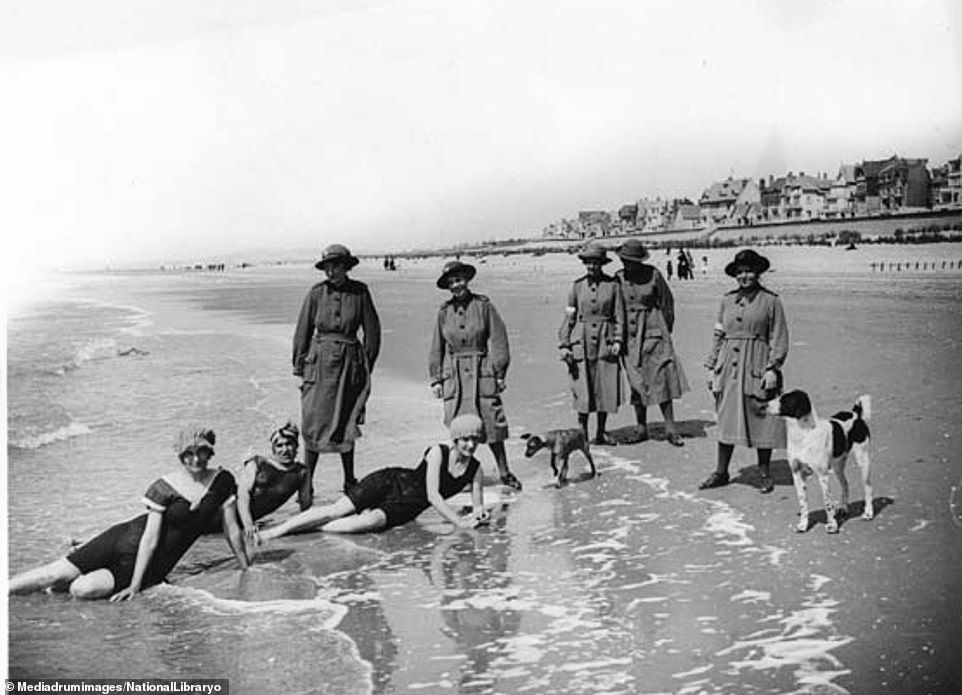 Pictured: Women’s Auxiliary Army Corps members enjoy some respite at one of France’s beaches alongside their canine acquaintances 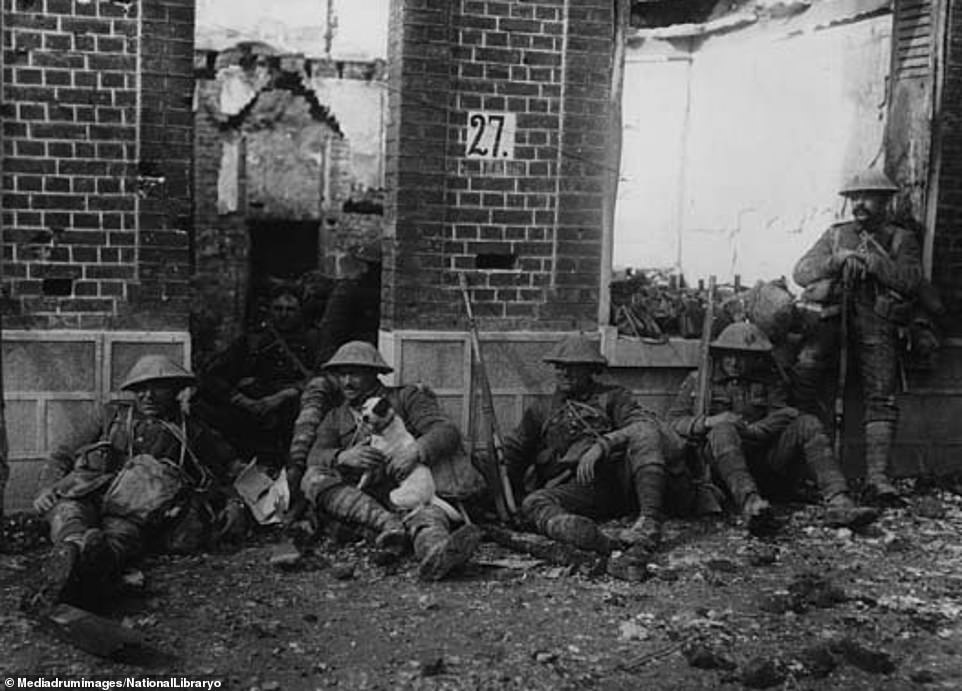 Pictured: Five soldiers at a bombed house in Peronne, France, during World War I. The secodn one from the left is holding a terrier, a perennial source of comfort

Messenger dogs that served in the British Army were recruited from Battersea Dogs’ Home in London, then trained for active service at The War Dog Training School in Shoeburyness, England.

The dogs that successfully completed their initial training then received an overseas posting to kennels at Etaples, in France. From Etaples, the dogs were posted to kennels near the front line, where they joined up with combat units.

Fleet of foot and well-trained, the dogs would deliver vital messages in the throes of battle, presenting a far smaller and quicker target for enemy sharpshooters to hit than their human equivalent. 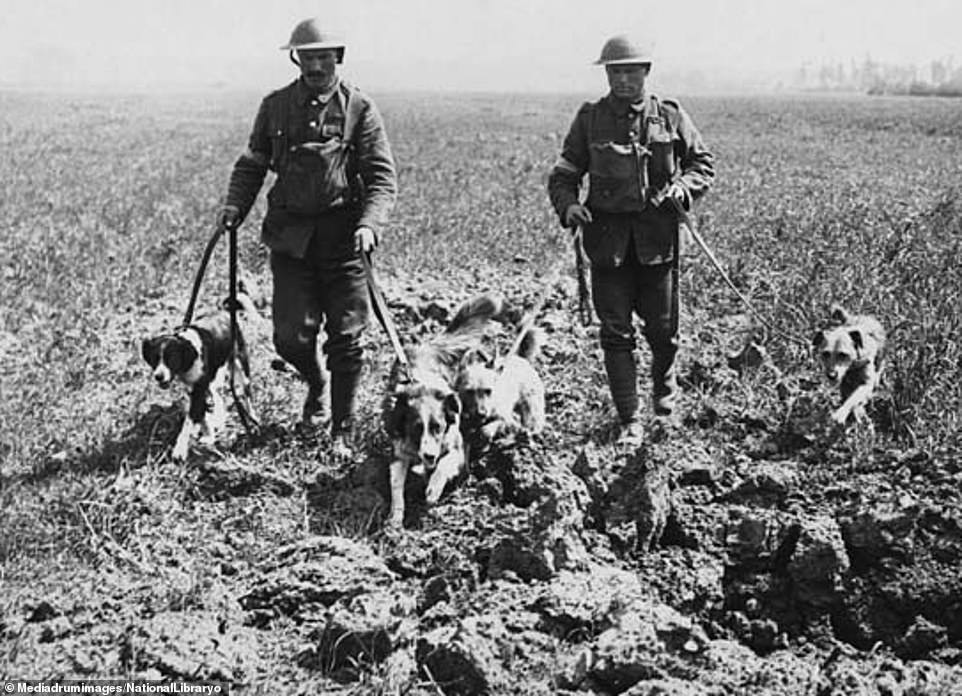 Pictured: Pups close to the front line straining at their leashes 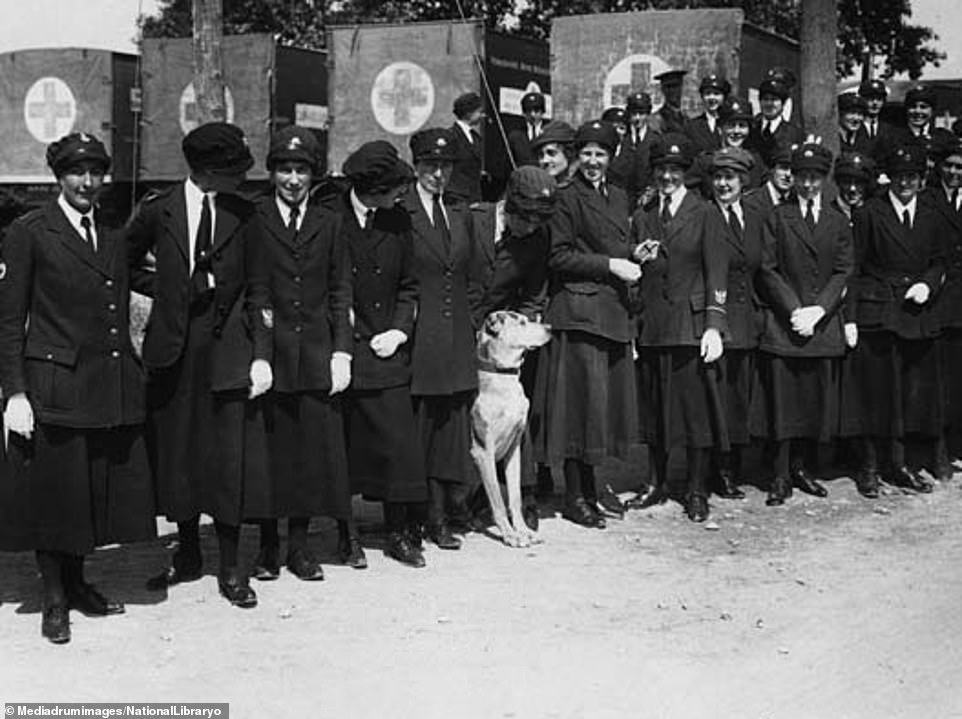 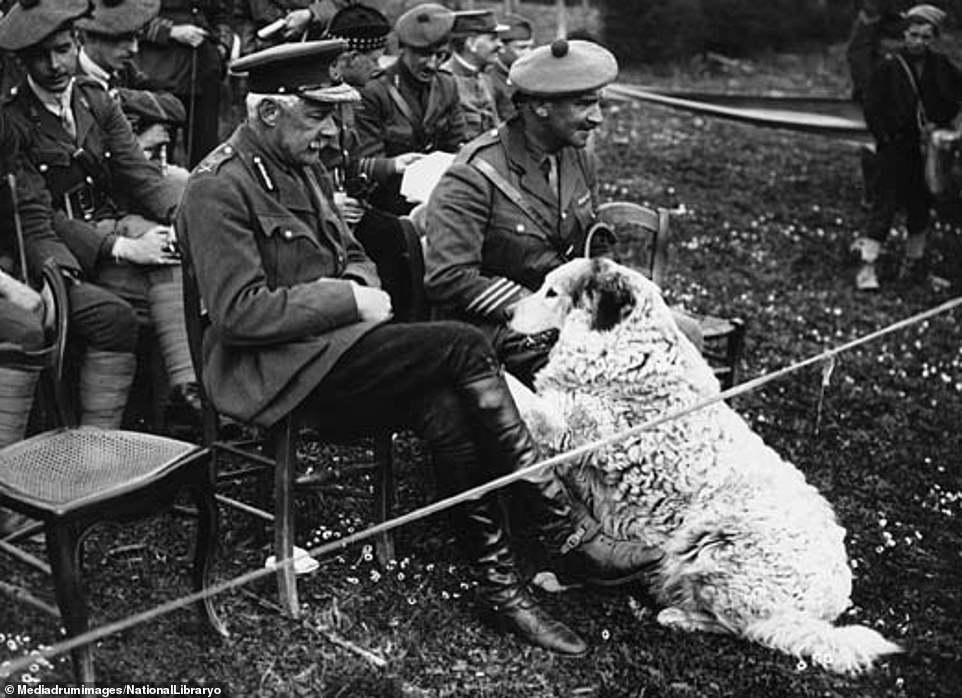 Pictured: Divisional Commander of the Black Watch – a Scottish Regiment – with the divisional pet ‘Rip’ 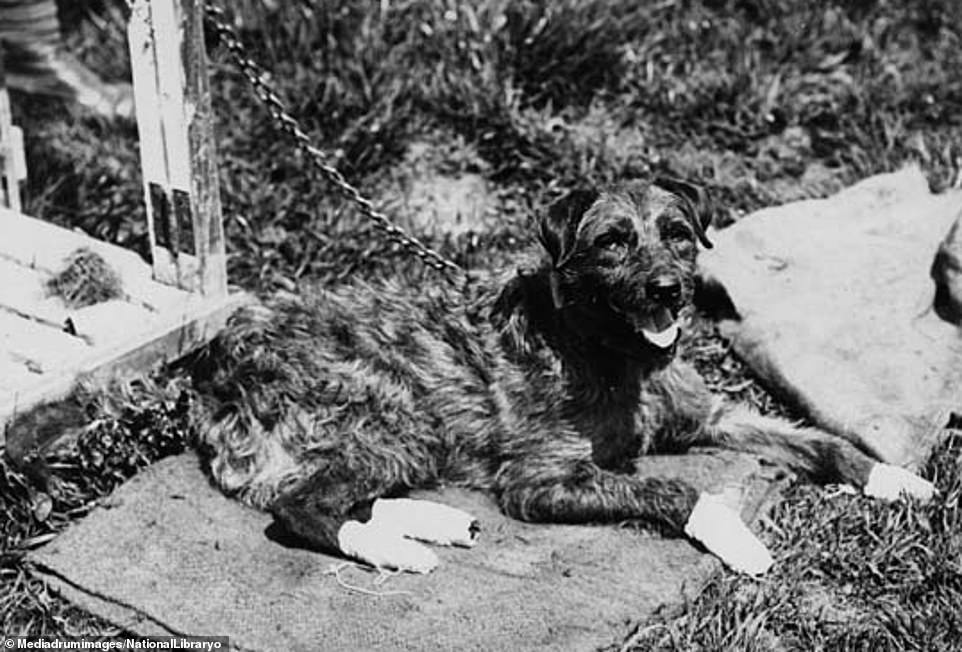 Pictured: With bandages on all four paws, this dog – called ‘Paddy – carried out a range of hazardous duties in the front line trench, despite the shellfire and poisonous gas

On average each sectional kennel had 48 dogs and 16 handlers, a ratio that indicates how important the dogs’ work was at the front. Usually the dogs had been strays, so one particular breed of dog could be not preferred.

Some dogs were adopted by British soldiers after their owners were killed or had fled from the war zone. 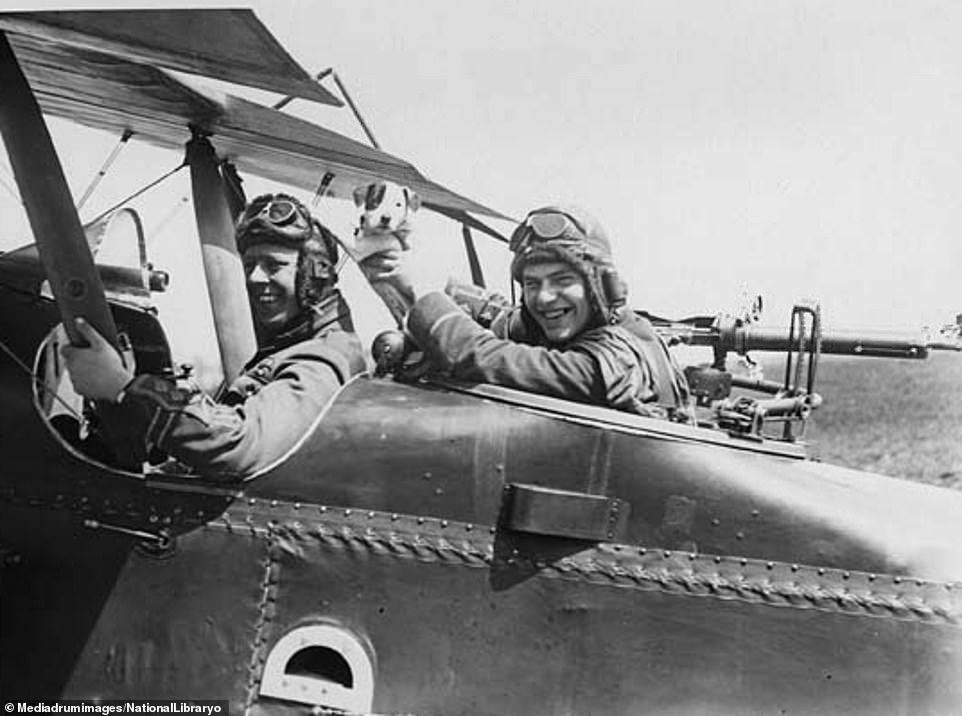 Pictured: Cheery pilot and observer with their cute mascot pup ready for a fight over the German lines 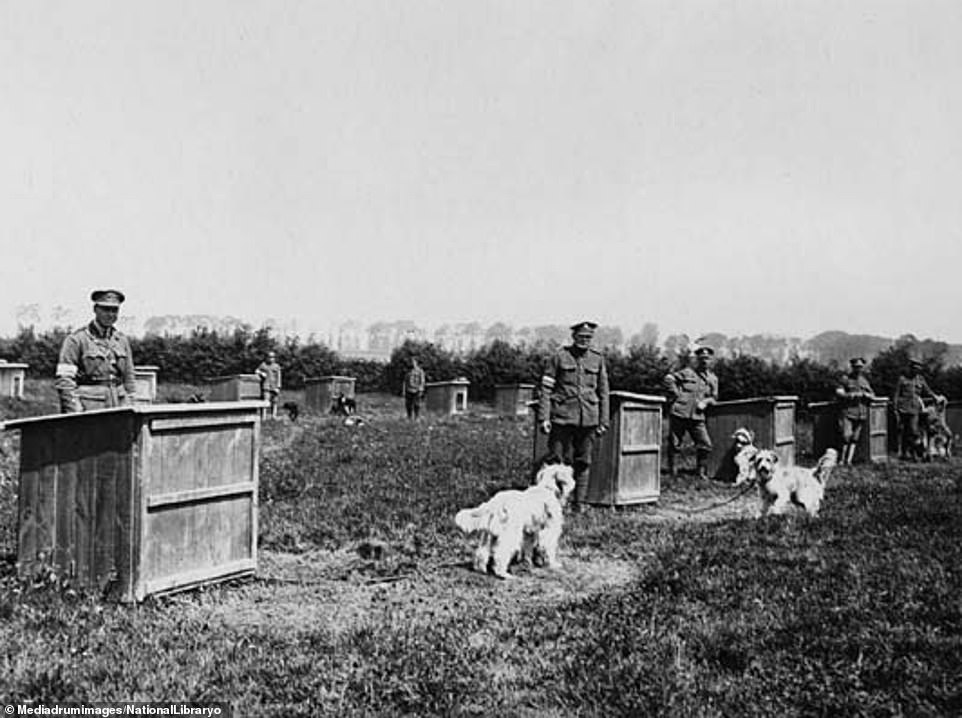 Pictured: Messenger dogs on parade outside their kennels, close to the Western Front 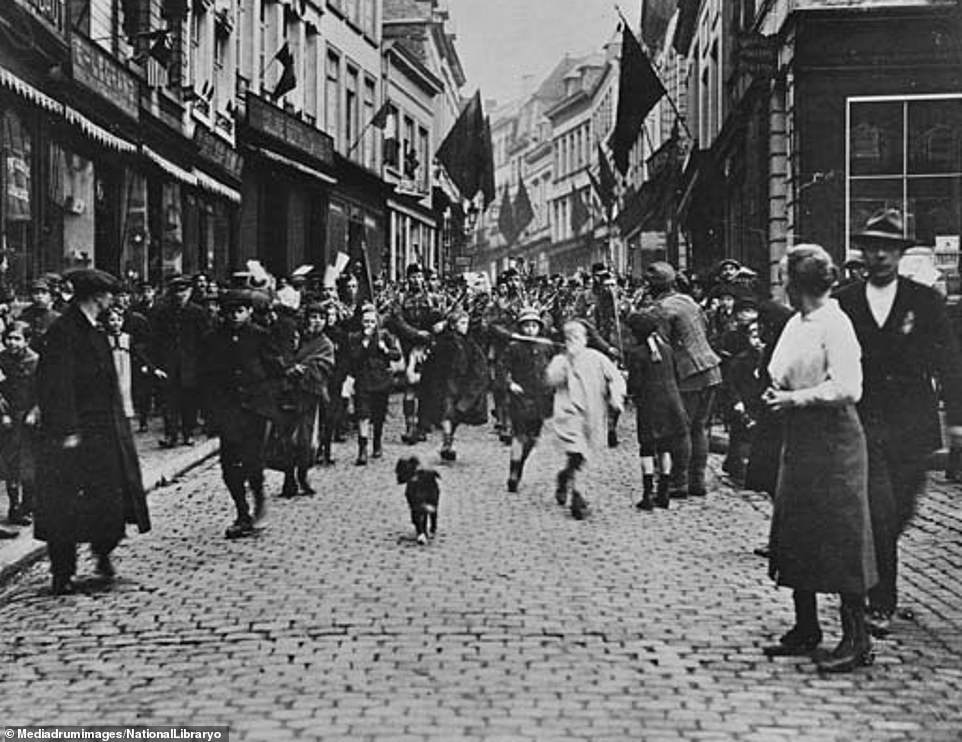 Sentry dogs were trained to keep watch over the soldiers. They were taught to growl or bark when they heard a stranger in the surrounding area.

Many Dobermans were trained as sentry dogs.

Trenches were littered with pests including rats which fed on rotting food because there was no proper way of disposing of rubbish in the trenches. 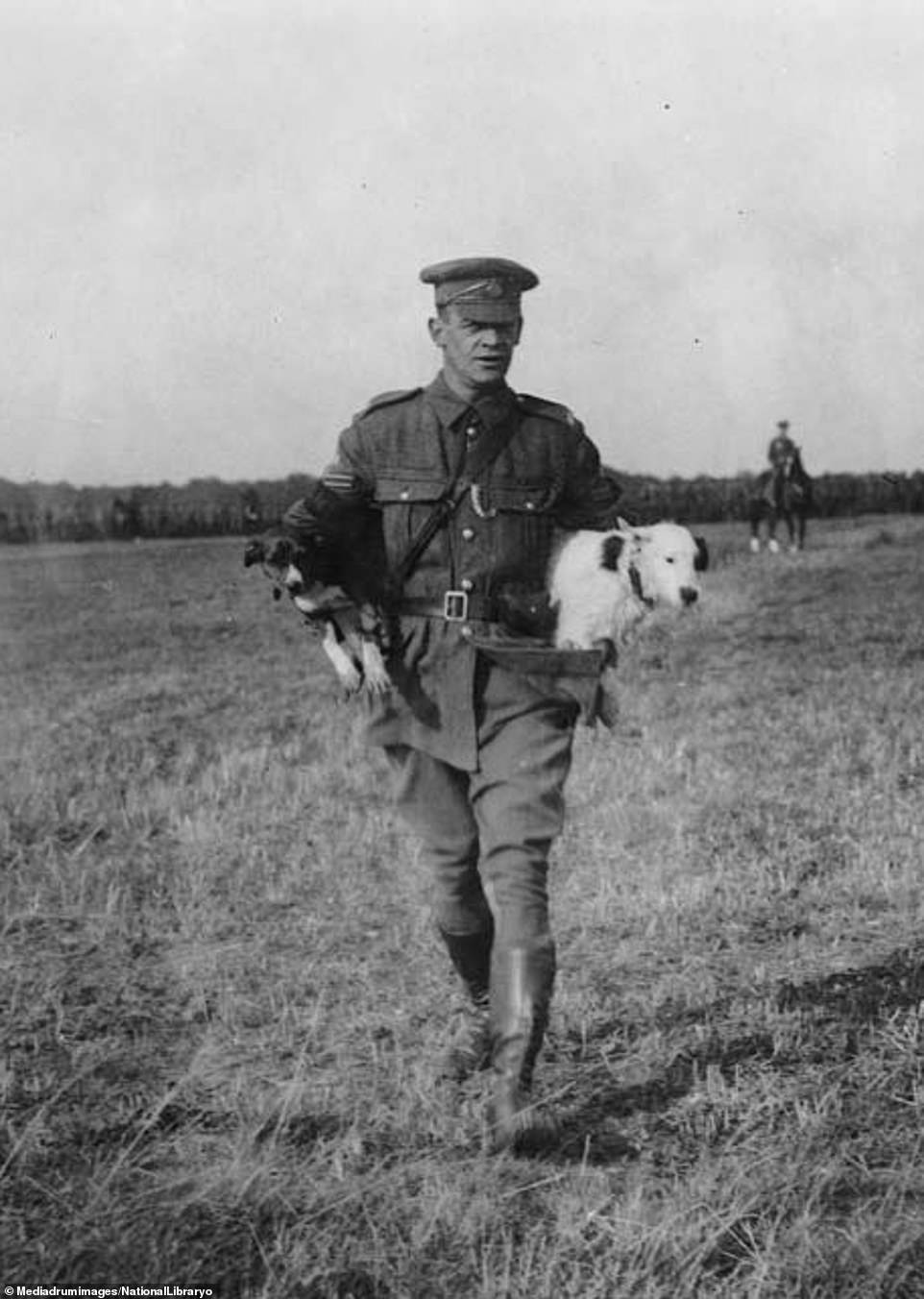 Pictured: Military Police had their work cut out to keep the over-eager dogs off the parade ground during a visit from the top brass 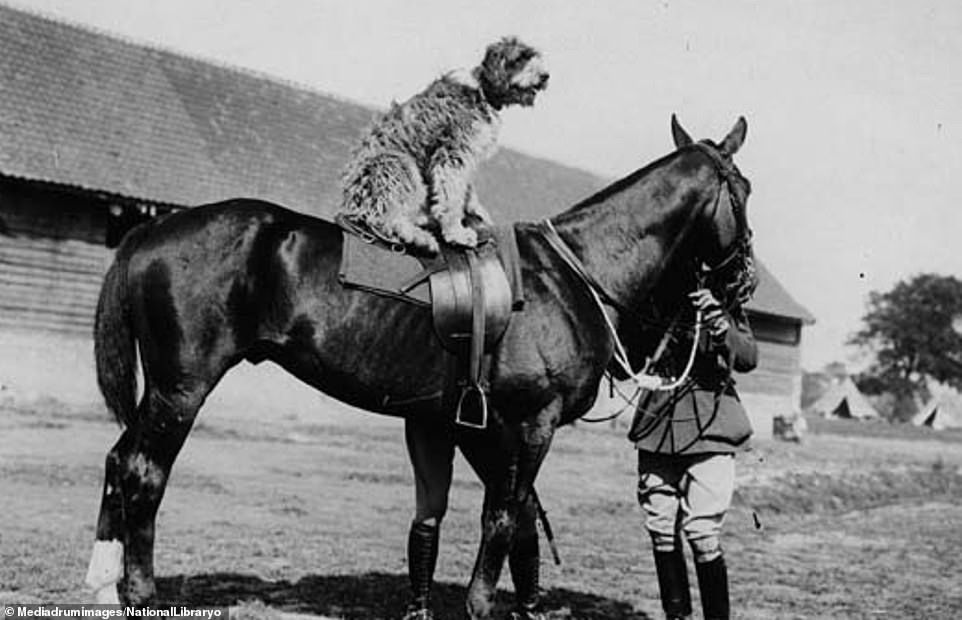 Pictured: The regimental pet of a battalion of the Staffordshire Regiment sits proudly atop a horse 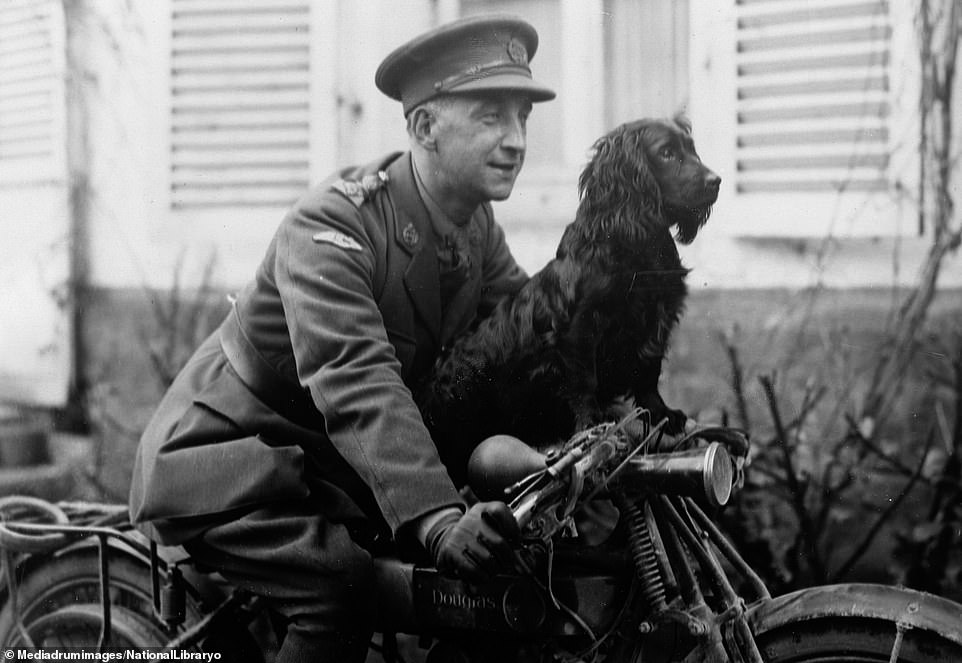 Pictured: Stunter, the clever mascot of the Tank Corps who, owing to his experience gained by riding about in tanks, can balance himself on the bars of a motorbike

Dogs were let loose in the trenches to hunt the rats.

Up to 20,000 dogs were trained for front-line duties during World War One. A Lt Col Richardson, the man in charge of running the War Dog School of Instruction, was quoted in the Aberdeen Evening Express in 1918 as saying: ‘The skill, courage and tenacity of these dogs has been amazing’. 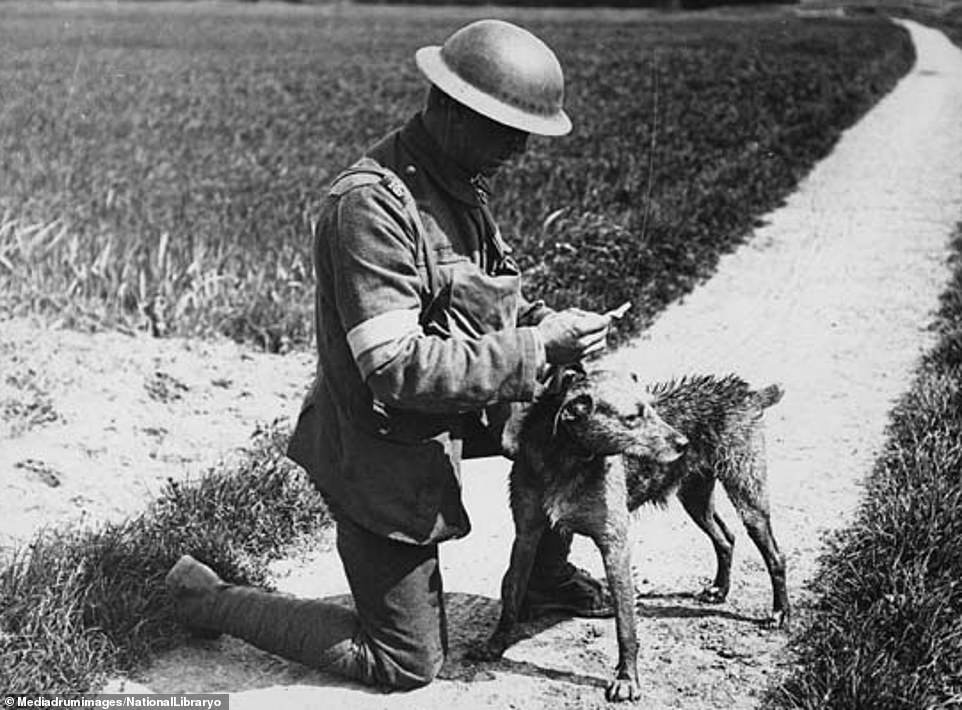 Pictured: With his soaking wet messenger beside him, this handler is checking a message that this dog has just carried to him. The bag attached to his chest is likely to be full of correspondence 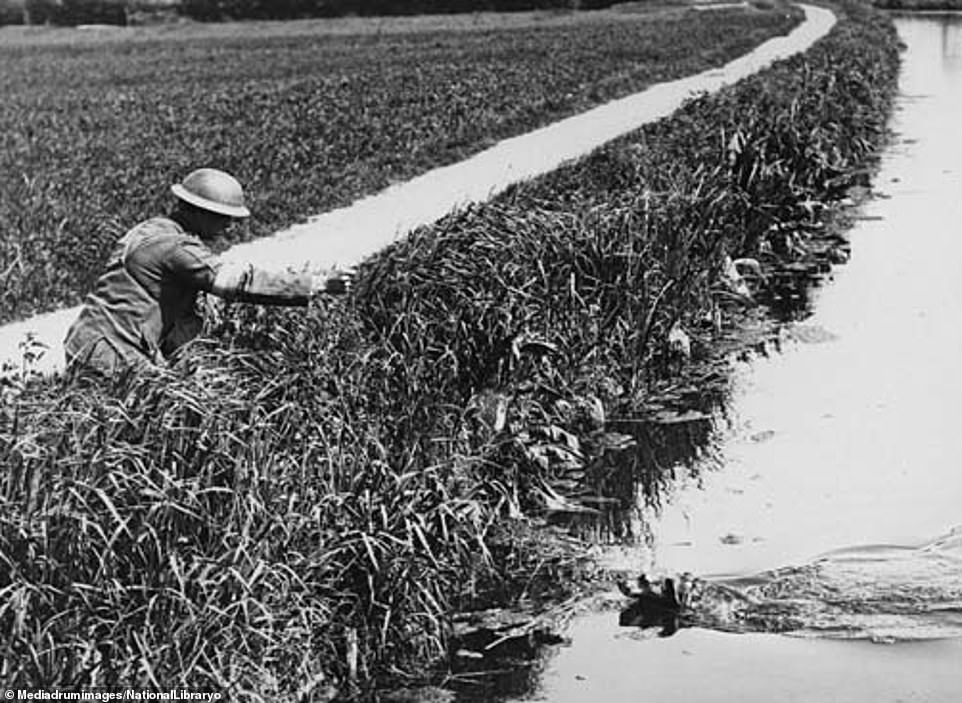 Pictured: War messenger dog in the front area swimming across a canal to reach its master and deliver a message. Messenger dogs were usually drafted from Battersby Dogs Home 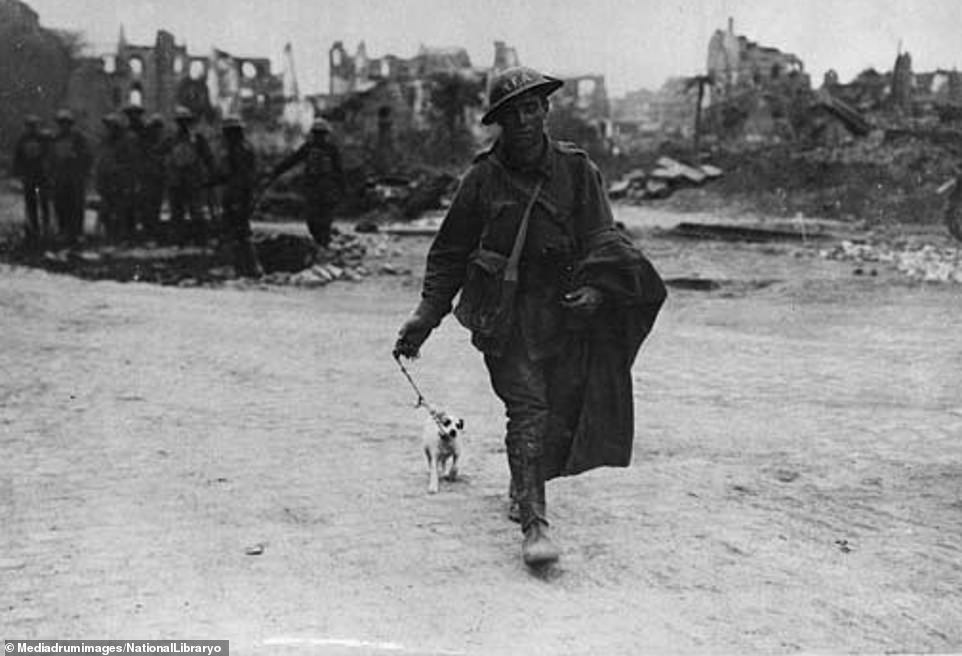 Pictured: A relaxed but dirty soldier with a coat slung over his arm is leading a tiny dog away from an out-of-focus group of soldiers 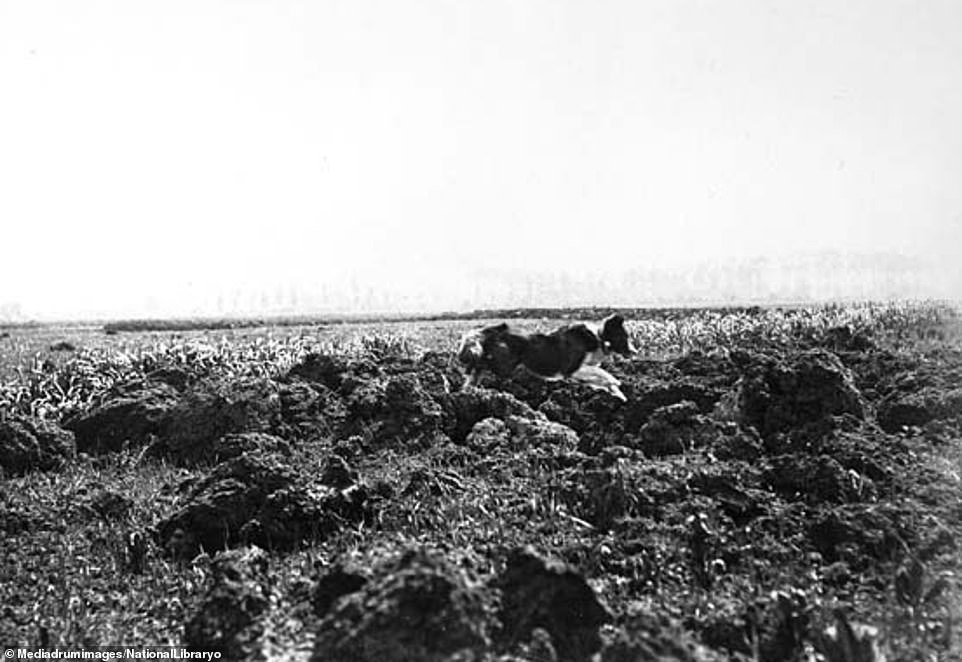 Pictured: Messenger dog in the front area jumping across shell holes with a message for headquarters behind the lines