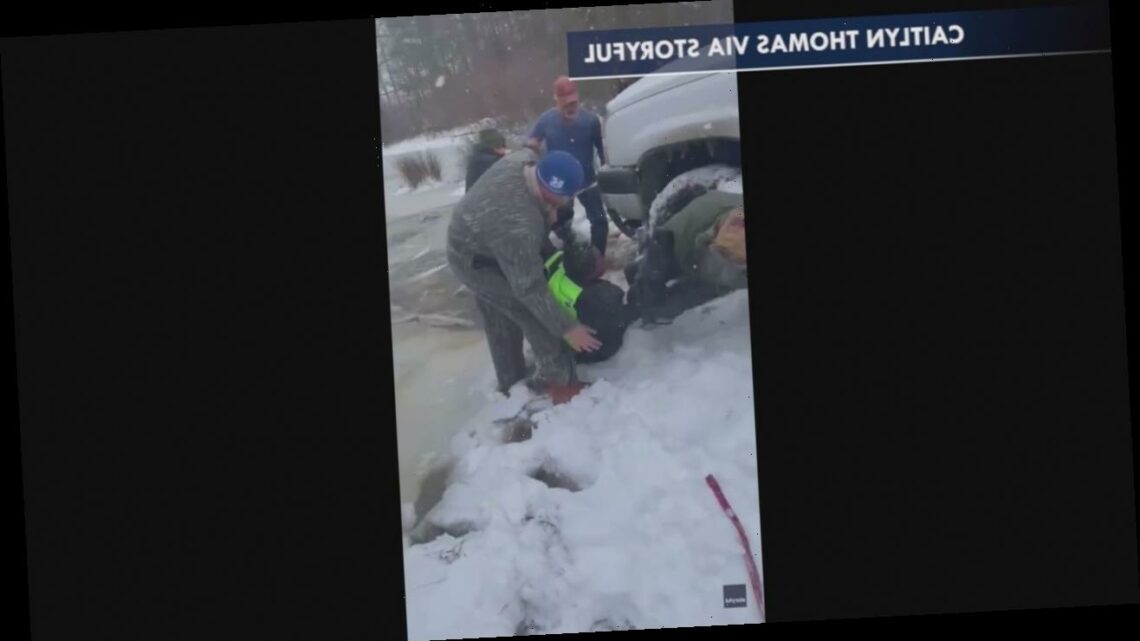 Video from Caitlyn Thomas via Storyful shows the 11-year-old being rescued.

An 11-year-old Texas boy was rescued from a frozen pond last week after a teenager walking her dog saw him and called for aid.

Caitlyn Thomas,18, was out walking her Labrador retriever in Jefferson on Wednesday when she spotted the boy, who appeared to be trapped.

In a Wednesday interview with KTAL, the high school senior said she had called out to the boy, but he did not respond.

“He was just looking at me,” Thomas said. “It was scary.”

Although she first pounded on neighbors’ doors without luck and called 911, Thomas said she had trouble describing their location to authorities.

Knowing that time was running out for the boy, she called her grandfather.

Randy Thomas, who lives just a block away, quickly responded to the scene.

In a video posted to Facebook, Thomas is seen wearing only a T-shirt and jeans chest-deep in the freezing water.

He initially tried to get the boy to grab a rope tied to his truck, but it became apparent that the boy was unable to move his arms.

With the help of others who had rushed over, the boy was eventually pulled to safety.

“Well it’s not everyday you save a life. Please keep this little boy in your prayers I don’t know how long he was out there,” Caitlyn Thomas wrote alongside the video.

Randy told KTAL he was proud of his granddaughter.

In a statement, the Marion County Sheriff’s Office said they had received a call at approximately 2:27 p.m. CT in reference to the Berea area incident and that the sheriff’s office, Texas Parks and Wildlife officers and Christus EMS all responded to the call.

“Upon arrival the juvenile was found to be already inside a residence with his mother. The juvenile was retrieved from the pond by a neighbor. Efforts were made by first responders to warm the juvenile until EMS arrived. EMS arrived on scene and took over care of the juvenile,” wrote Chief Deputy Robert Davis. “The quick thinking of the caller and the actions of the neighbor helped save the juvenile from further harm.”

Over the weekend, President Joe Biden declared a major disaster in Texas following devastating winter storms that left millions without power and water and led others to die of cold or carbon monoxide poisoning as they attempted to warm themselves in their cars.

Why Analysts Have Big Expectations for Snap