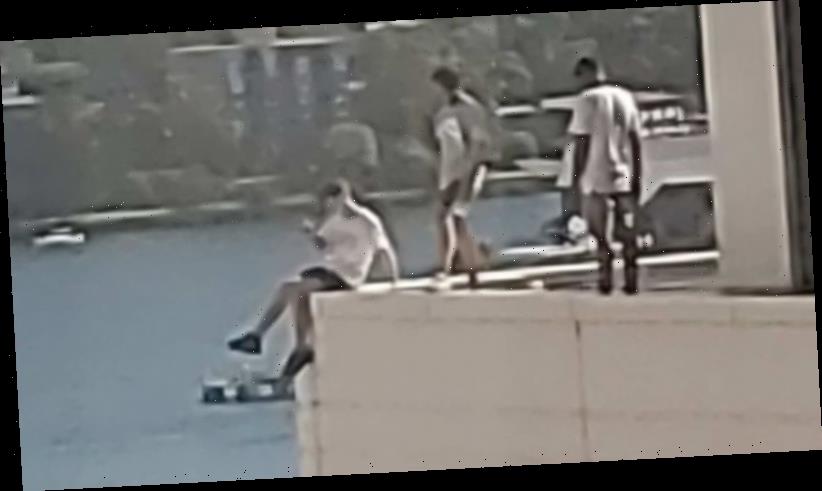 Pictures have emerged of a group of teenagers taking photos on a ledge of a high-rise hotel in Sydney's CBD, leading police to investigate.

The photos, sent to the ABC by an office worker and published on Thursday, show the group congregating on a 12th-floor ledge of the five-star Hyatt Regency on Sussex Street. Several teenagers are shown sitting with their legs dangling over the edge. 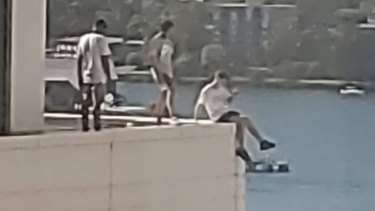 A group stands near the edge of a 12th-floor ledge at the Hyatt Regency in Sydney on Wednesday.Credit:ABC

In one of the photos, a group can be seen walking in single file along the narrow ledge. One of the teenagers was holding up his phone and filming.

A police spokesman said officers from Sydney City Police Area Command were looking into the incident, which unfolded from about 2.30pm on Wednesday.

Officers will investigate whether trespassing or graffiti offences were committed, with other inquiries expected to be made by hotel security.

Marianne O'Donoghue, the director of marketing and communications for the hotel, told the ABC that the group left before police could be called.

"We were alerted that people had entered the hotel who weren't staying there and our security guards immediately investigated and went and found them and ejected them from the building," Ms O'Donoghue said.

She described the situation as "a first".

"We'll continue to monitor activity in and around the hotel as it happens but this is a rarity and not something we've dealt with on a regular basis," she said.

Catch all the day’s headlines

At the end of each day, we’ll send you the most important breaking news headlines, evening entertainment ideas and a long read to enjoy.  Sign up to The Sydney Morning Herald’s newsletter here, The Age’s here, Brisbane Times’ here, and WAtoday’s here.

The Ethereum network is being turbocharged by layer-two solutions

TA: Ethereum Fails Again At $1,150: Why Dips Could Be Limited
Technology