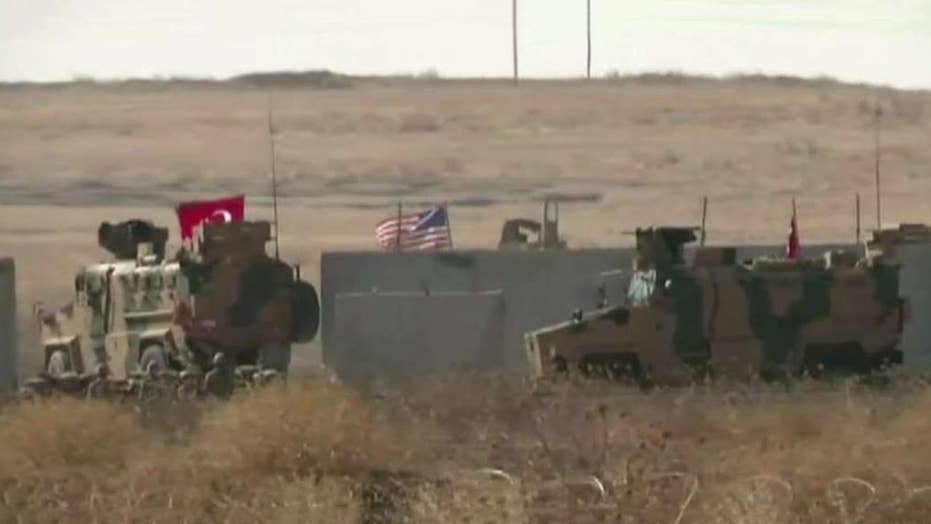 After the White House announced that the U.S. will withdrawal troops from northern Syria, the Kurds are now looking to the regime of Bashar al-Assad for help; Trey Yingst reports from Jerusalem.

Syrian Kurdish forces were calling on their people Wednesday to move toward the border with Turkey and “carry out acts of resistance,” as reports emerged that the first Turkish troops have entered the country as part of a planned military assault.

Turkey has long threatened an attack on the Kurdish fighters in Syria, whom Ankara considers terrorists allied with a Kurdish insurgency within Turkey. A small group of its forces entered Syria Wednesday morning near the towns of Tal Abyad and Ras al-Ayn, a Turkish official told Bloomberg.

"We call upon our people, of all ethnic groups, to move toward areas close to the border with Turkey to carry out acts of resistance during this sensitive historical time," read a statement from the local civilian Kurdish authority known as the Autonomous Administration of North and East Syria.

In its call for “general mobilization,” the Kurds also urged the international community to live up to its responsibilities as "a humanitarian catastrophe might befall our people" in the region. 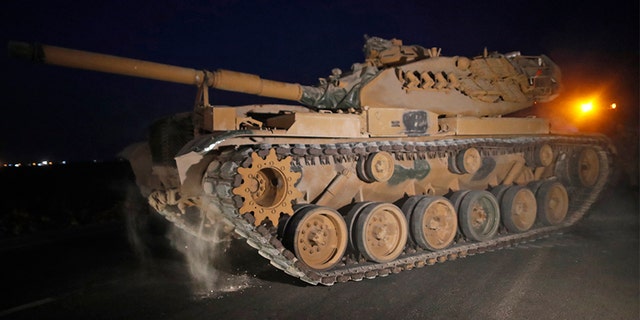 A Turkish army tank is driven to its new position, after was uploaded from a truck, on the Turkish side of the border between Turkey and Syria, in Sanliurfa province, on Tuesday.
(AP)

The stark message was in contrast to what is being said Wednesday from north of the border.

Fahrettin Altun, the Turkish presidency's communications director, called on the international community in a Washington Post op-ed "to rally" behind Ankara, which he said would also take over the fight against the Islamic State terrorists.

Turkey also is aiming to "neutralize" Syrian Kurdish militants in northeast Syria and to "liberate the local population from the yoke of the armed thugs," Altun added.

A Syrian war monitoring group, the Britain-based Syrian Observatory for Human Rights, reported Wednesday that people were already fleeing Tal Abyad as the Turkish troops are closing in.

President Trump is battling criticism from Kurdish protesters and his own party for his decision to pull U.S. troops from Syria; Lucas Tomlinson reports from the Pentagon.

Turkish officials who spoke to Bloomberg on condition of anonymity say the offensive will target Syrian border towns first to minimize any chance of a Kurdish state growing near its territory.

Expectations of a Turkish invasion rose after President Trump on Sunday abruptly announced that American troops would step aside ahead of the Turkish push — a shift in U.S. policy that essentially abandoned the Syrian Kurds, longtime U.S. allies in the fight against ISIS in Syria.

But Trump also threatened to "totally destroy and obliterate" Turkey's economy if the Turkish push into Syria went too far, and cast his decision to pull back U.S. troops as fulfilling a campaign promise to withdraw from the "endless war" in the Middle East.

For the past four years, the Kurds helped the U.S. fight ISIS; Trey Yingst reports from Jerusalem.

The moves have been met with criticism from politicians on both sides of the aisle.

"I agree with President Trump's objective to not be bogged down in the Middle East, to bring our men and women home, and we really need to be looking at the rising threat of China," McSally said on "The Story with Martha MacCallum" Tuesday.

"However, we have a generational struggle and fight against Islamic terrorism,” she added.

"Such reckless attitude to this highly sensitive subject can set fire to the entire region, and we have to avoid it at any cost," he said during a visit to Kazakhstan. 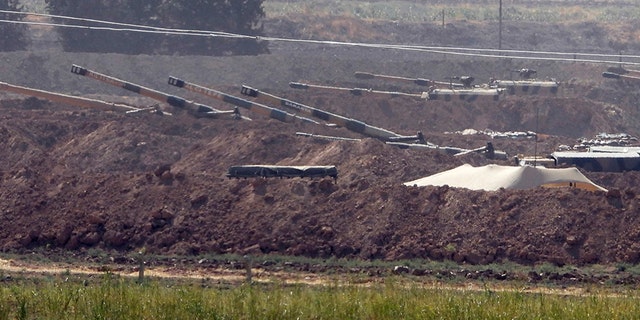 Turkish forces artillery pieces are seen on their new positions near the border with Syria in Sanliurfa province on Sunday.
(AP/DHA)

Earlier on Wednesday, ISIS militants targeted a post of the Kurdish-led Syrian Democratic Forces in the northern Syrian city of Raqqa, which was once the de facto ISIS capital at the height of the militants' power in the region.

The Kurdish-led SDF, which is holding thousands of ISIS fighters in several detention facilities in northeastern Syria, has warned that a Turkish incursion might lead to the resurgence of the extremists. The U.S. allied Kurdish-led force captured the last ISIS area controlled by the militants in eastern Syria in March.

In Wednesday's attack, ISIS launched three suicide bombings against Kurdish positions in Raqqa. There was no immediate word on casualties.

Also Wednesday, Iranian state television reported a surprise military drill with special operations forces near the country's border with Turkey, in Iran's Western Azerbaijan province. The TV didn't mention the expected Turkish offensive into Syria or elaborate on the reasons for the drill.