Wheatley, Ontario: Electricity is cut off. Guards sit in cars on every corner. Hundreds of people are out of their homes, some without access to their clothing or belongings.

And officials are frantically working to unravel the grim mystery of what exactly caused a gas explosion in August in Wheatley, Ontario — and how to prevent another explosion from happening.

More than four months after the blast shuttered Wheatley’s downtown and injured 20 of the town’s 2900 residents, authorities still don’t know where the gas leak came from or why it happened. 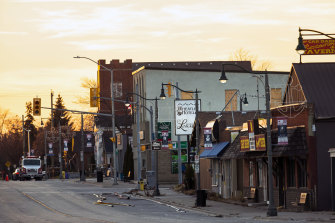 Residents and local officials are examining the risks associated with the town’s history as a site of 19th-century gas wells, vestiges of the area’s oil and gas industry. Many are now grappling with whether the town’s centre, which was formally recognised as a post office in 1865, should be permanently abandoned.

“It still is one of those like really surreal things where you tell people like, yeah, the town blew up,” said Stephanie Charbonneau, a schoolteacher who was forced to flee her house with her family.

“Who knows what’s going to happen at the end of all of this? What is Wheatley going to look like?”

In the 1890s, gas wells were dug to supply heat and power to homes and businesses in and around Wheatley, which is in southwestern Ontario on Lake Erie. Over time, the wells became obsolete, and buildings were constructed directly on top of them; the wells’ locations were loosely, if at all, documented. 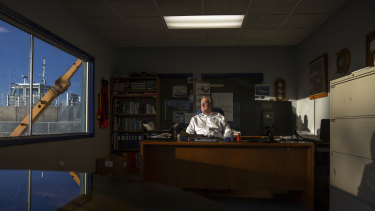 Steve Ingram, who manages the local shipyard, in his office on Lake Erie in Wheatley, Ontario, Canada.Credit:The New York Times

Before the blast, Wheatley was mostly known for its Lake Erie fishery; a shipyard managed by Steve Ingram; and a lakeside provincial park. Few people in the community knew about the gas wells or that an explosion had levelled a meeting hall in 1936.

Stories of gas leaks from the town’s oldest residents and newspaper accounts of older explosions begin circulating only after the August explosion.

The first sign of trouble was June 2, when Whit Thiele, a local business owner, went to investigate a foul odour in the basement of a downtown commercial building he owned. There, he saw water pouring through cracks in the foundation and through a drain in the floor before pooling into a fizzing mass. 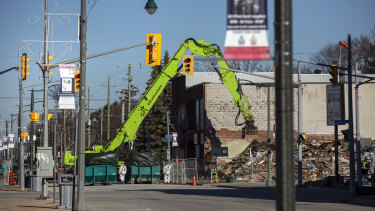 A crew works to demolish a building next to the site of last summer’s gas explosion in Wheatley, Ontario.Credit:New York Times

Thiele felt ill, became woozy and had to be revived by firefighters who evacuated the area around the office.

Sensors were then installed and quickly began detecting hazardous gases, leading firefighters to evacuate the area around the building twice more during the summer.

Nearly three months later, on August 26, Ingram and his wife, Barb Carson, were getting ready for dinner at home when firefighters again began taping off an evacuation zone because of a gas leak.

“Well, here we go again,” Ingram recalled saying to his wife that evening. “Sooner or later this place is going to blow up.”

Suddenly, the sound of the explosion filled the air. The windows of the Ingrams’ home bent in and then popped outward, miraculously without breaking, as the shock wave toppled their belongings throughout the house. While insulation and other building materials began drifting down from the sky, the couple grabbed their phones and iPads, and fled wearing only T-shirts and shorts.

It was Thiele’s building that had blown up, taking down an adjacent pizzeria and laundromat as well as a newly opened motel and bar. A surveillance camera across the street captured how a tongue of orange flame shot out of the building and then got sucked back inside before blasting the buildings into the sky.

Local officials quickly opened an investigation. Using ground-penetrating radar, they discovered the site of an old well under a paved parking lot behind the explosion site. Closer to the site, the ground continued to burp gas about every 40 days, which hinted at the source of the gas leak and also spurred fears of another explosion.

But further investigating seemed to raise more questions than answers.

Don Shropshire, chief administrative officer for Chatham-Kent, the regional municipality that governs Wheatley, said recent excavation work at the blast site has uncovered a second old gas well that may be leaking. Ontario officials have said there may be a third old well still hidden somewhere downtown.

“I’m reasonably confident that they’re going to find the source of the gas,” Shropshire said. “Whether or not it can be mitigated — that’s an entirely different question.”

While experts from Alberta, the capital of Canada’s oil and gas industry, have been brought in to assess how and why the gas is surfacing, the threat of another explosion has slowed their progress.

About 300 people are still not allowed to return to their homes, and 38 of Wheatley’s businesses remain closed. There is no estimate for when, or if, everyone will be allowed to return home permanently — or whether the destroyed buildings can even be rebuilt. Shropshire said it may prove impossible to ever safely reopen the area around the blast.

Wheatley residents have gone from shock to dismay to anger that more hasn’t been done to solve the mystery of the explosion or to start working on repairs. The province has committed about $3.96 million in assistance, but several shop owners said they have yet to see any of that money. They believe individual payments will be far short of what they will need to restart business.

“I try to keep my anger at a level,” said, Ingram, who has been allowed to return to his house only once, for one hour in early December, to gather up some winter clothing. He added, “I can’t even drive down and look at my house because my wife just bursts into tears.”

At a heated public meeting in November, local officials acknowledged the frustration and anger. But they also emphasised the complexity of the problem and said it will take time to solve it.

“I don’t want anyone to guess what the problem is, dump concrete on it and 60 years from now my grandkids who could be living in Wheatley have the same darn problem again,” Melissa Harrigan, a member of the town council, said at the meeting.

“I am so sorry that it is disrupting your lives in so many ways I can’t imagine, I truly can’t, but I can say we’re trying.”

Who bears responsibility for the cost of all this is unclear. The companies that drilled the wells are long gone. There is talk that lawyers representing Wheatley residents will soon ask a court to approve a class-action lawsuit against the municipality, which owns the parking lot covering one of the wells.

The gift and custom woodworking shop that Tracey Declerck owns with her daughter still sits boarded up, and full of merchandise, immediately across the road from the blast site.

“We’re little people; that’s my livelihood over there,” Declerck said in December while buffeted by the wind off Lake Erie. “Am I supposed to go get another job until they fix this?”

Declerck said she was concerned that the blast may have left her shop’s building structurally unsound. Like many people in Wheatley, she is sceptical that a permanent fix for the leaking gas will ever be found.

Thiele, the business owner, said that he believes business insurance may become unaffordable in the town and that public confidence will be difficult, perhaps impossible, to restore.

“I can’t imagine anybody building a building there and feeling safe,” he said.

This article originally appeared in The New York Times.