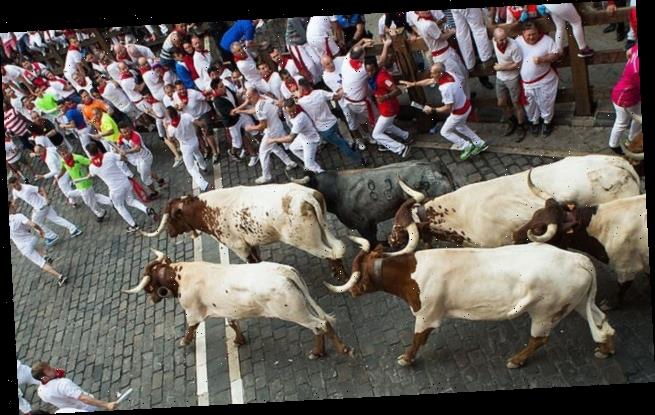 Spain’s Pamplona bull-running festival will have to be cancelled for a second year in a row due to the coronavirus pandemic, a local official has said.

The San Fermin festival ‘won’t be possible’ this year, regional head of Navarre, Maria Chivite, told an economic forum on Tuesday. ‘It is not responsible to create expectations which will be impossible to fulfill,’ she added.

A spokesman for Pamplona city hall told AFP news agency that it is up to the regional government of Navarre to formally cancel the event held each year from July 6-14, but that as of now ‘that decision has not been taken’. 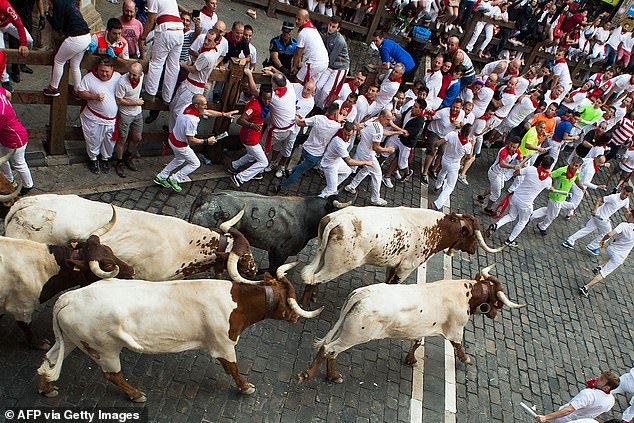 2019: Participants run next to Miura fighting bulls on the last bull run of the San Fermin festival in Pamplona, northern Spain. The festival had to be cancelled in 2020 due to the coronavirus pandemic, and a local official has said it will likely have to cancelled in 2021 as well

Spain is currently under a nationwide curfew until early May 2021, with people only allowed outside for essential reasons such as work, education, to buy medicine or to care for those who cannot look after themselves – such as the elderly or children.

During the annual celebrations, half-tonne fighting bulls chase hundreds of daredevils, many of whom wear traditional white shirts and scarves, through the narrow streets of the city each morning.

With over a million people attending the festival in 2019, it would be impossible for officials to enforce its social distancing measures that require people to remain one and a half meters apart from one-another to limit the spread of the virus.

The festival in honour of the patron saint of Spain’s northern Navarre region – San Fermin – dates back to medieval times and involves religious processions, concerts and all-night partying, as well as the hair-raising daily bull runs that made it famous.

The festival draws tourists from around the world and its cancellation will deal another blow to the local economy, especially the hotel and restaurant sector which is already reeling from lockdowns and restrictions imposed to contain the virus.

The San Fermin festival, that is normally held in July, was immortalised in Ernest Hemingway’s 1926 novel ‘The Sun Always Rises’. 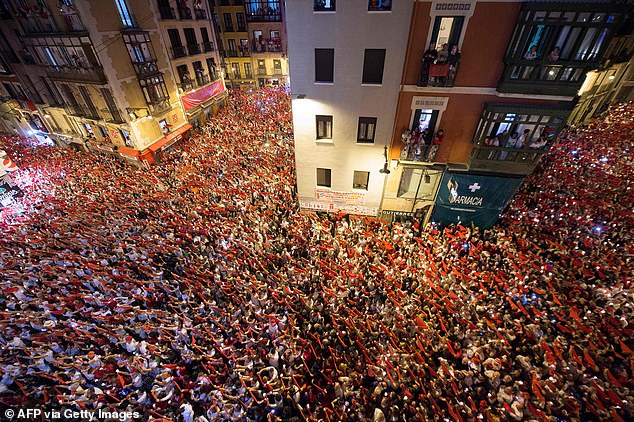 Pictured: In this file photo taken on July 15, 2019 revellers raise red scarves and candles as they sing the song ‘Pobre de Mi’, marking the end of the San Fermin festival in Pamplona

The last time Pamplona did not celebrate the festival two years in a row was during Spain’s 1936-39 civil war.

Other major Spanish events have already been called off for the second year in a row. Seville has cancelled Easter week processions while the Mediterranean port of Valencia has postponed until the second half of the year the Las Fallas festival usually held in March.

Spain has been hard-hit by the pandemic, recording nearly 60,000 deaths from over 2.8 million cases so far, including 350 of the strain detected in Britain.

Tuesday also saw Spain that it would restrict arrivals from Brazil and South Africa by air to try to reduce the spread of new coronavirus variants. 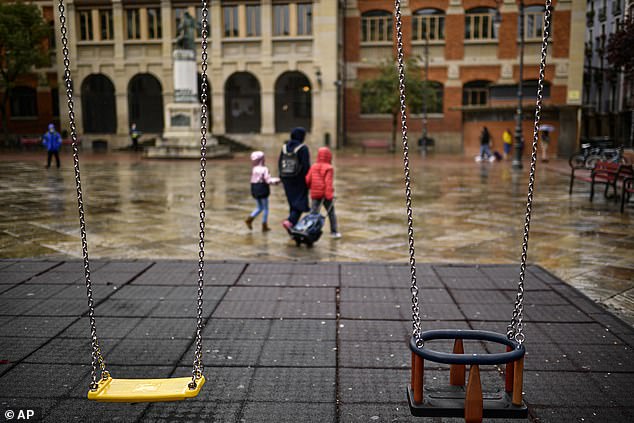 2020: People walk past empty swings due to measures to prevent the spread of the coronavirus, in Pamplona, northern Spain in October 2020

Only legal residents or nationals of Spain and the neighbouring microstate of Andorra will be allowed in from Brazil and South Africa, government spokeswoman Maria Jesus Montero told a news conference.

Passengers stopping in Spain while on their way to another country will be allowed to enter as long as they will remain for less than 24 hours and do not leave the airport, she added.

The new rules will take effect on Wednesday and will remain in force for two weeks although it could be extended depending how the pandemic evolves, the minister said. 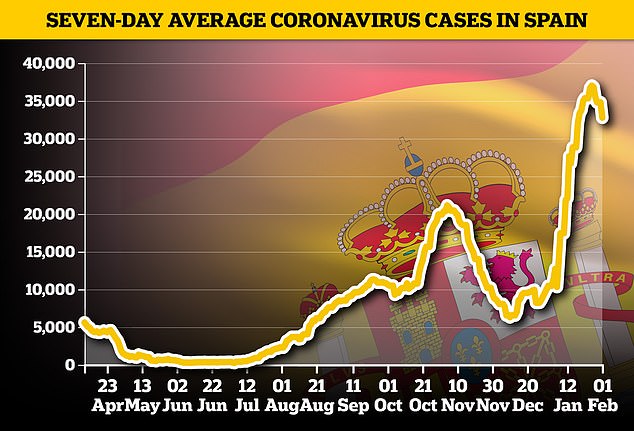 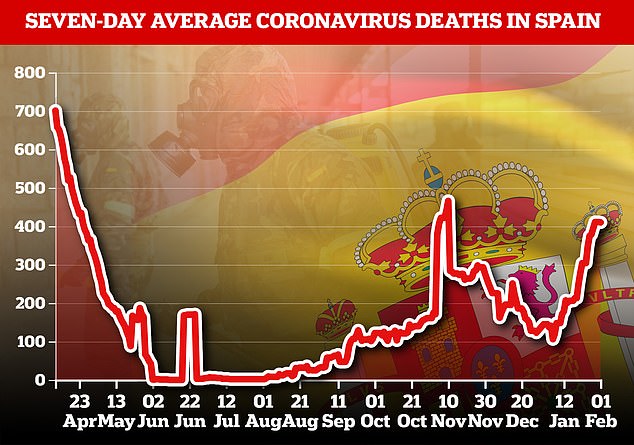 Spain has been hard-hit by the pandemic, recording nearly 60,000 deaths from over 2.8 million cases so far, including 350 of the strain detected in Britain. Pictured: Graphs showing the seven-day average of coronavirus cases (top) and deaths (bottom) in Spain

Madrid has since the end of December banned arrivals by sea and air from Britain except for residents or nationals of Spain and Andorra because of the discovery of a new more contagious virus strain there last year.

This strain, which has led to a surge in infections in Britain in recent months, is one of several virus variants have been identified since the pandemic began last year.

Another strain, known as E484K, detected initially in South Africa and on subsequent variants in Brazil and Japan, has raised greater alarm among researchers over its possible impact on immunity.