Some certainty for when ‘my time has come’ 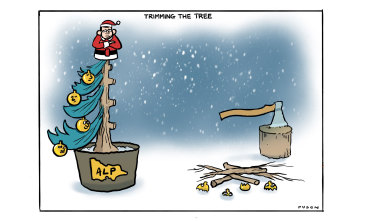 To submit a letter to The Age, email [email protected] Please include your home address and telephone number.

Some certainty for when ‘my time has come’

I read with interest the story about Colin Stratton and his wish to end his life of pain – “Son shot ailing father ’out of love‴⁣⁣(The Age, 10/12). Colin had been told paperwork for assisted dying could take weeks.

I was very fortunate. I approached a voluntary assisted dying facilitator in late October and, after obtaining a letter from my GP stating that I had less than six months of life expectancy, got an appointment to see a GP and oncologist at Latrobe Regional Hospital in Traralgon in early November. The whole process was very smooth and efficient.

Two weeks later, I got an appointment to see the hospital GP again to request the euthanasia medication and the permit was applied for. I had my medication delivered recently (not a “suicide pill”) and it is in safekeeping to use when I decide my time has come. I would encourage anyone who is suffering to approach voluntary assisted dying teams as my experience was completely positive.
Name and address withheld

With the potential for the “great resignation” to gather further pace in Australia, some business leaders would do well to brush up on their people skills. I read in disbelief about yet another executive showing low emotional intelligence as he laid off 900 employees over Zoom in the United States (The Age, 9/12).

Vishal Garg, the chief executive and founder of Better.com, a mortgage lending company, said in a call: “This is the second time in my career I’m doing this and I do not want to do this. The last time I did it, I cried. This time, I hope to be stronger.“If there was ever a time not to make it about you, Mr Garg, this was it. And to fire employees over Zoom is despicable. The known correlation between high power and low empathy needs to be called out and guarded against. Employees are tired and fragile, and compassionate leadership is needed now more than ever. Treat people well and they will want to stay.
Sarah Denholm, Blackburn

While the public health restrictions needed to prevent the spread of coronavirus were warranted and helped to keep our community safe, the negative consequences on people’s mental health were clearly foreseeable. Young people were particularly hard hit, as evidenced by the level of serious concerns about students’ mental health and wellbeing held by their teachers (The Age 10/12), and the significant increases in depression, anxiety, eating disorders and self-harm presentations to emergency departments.

The state government is to be commended for responding by increasing the mental health resources available to schools, and providing extra support for headspace centres. Nevertheless, it took a mostly reactive approach rather than also trying to proactively keep young people well through wellbeing and prevention strategies designed to offset the considerable stress created by prolonged lockdowns.

Hopefully, future public health responses will consider the potential for mental health harm, and take a more proactive approach to promote and protect people’s mental health rather than waiting until they become unwell before action is taken.
Dr Stephen Carbone, Thornbury

Dream of a time where there are no smokers

Congratulations to the New Zealand government for its decision to ban young people from being able to purchase tobacco in their lifetime under a plan to make the country smoke-free (The Age, 10/12). Would it not be wonderful if retail outlets of all types jointly agreed to cease selling tobacco products?
Rod Watson, East Brighton

A good idea, but it may not work in practice

Banning tobacco for the next generation sounds sensible on the surface, but seems to lack an understanding of history. Prohibition in the United States worked well, didn’t it?
Warwick Slade, Mooroolbark

The trap of contracts

My sympathy goes out to Rohan Wightman (Letters, 7/12). I am so glad I am retired from teaching. The crazy system whereby experienced teachers must constantly apply for positions should be assigned to the bin. How long will enthusiastic teachers stay with the Education Department if they can only get a 12-month contract each year?

Teaching used to be a secure job but no longer. It is the result of schools making their own budget decisions. This can be fantastic for the school, but it can also be a disaster as Rohan Wightman has experienced.

First-year teachers cost much less than experienced ones, so many schools have fallen into the trap of taking them on for only a year instead of fostering their careers. Good schools care for students and staff. What is the union doing to help?
Megan Peniston-Bird, Kew

Towards the US system

I am a pensioner and have relied on Medicare. I recall, when an active worker, that the unions and business agreed on certain industrial behaviour to aid the implementation of Medicare
by the Hawke/Keating government.

I recently went to have an MRI for an injury and was informed by a most embarrassed nurse that I had to pay for it because it was a “pre-existing injury”. Now, where have I heard that Americanism before?
Derek Costello, Belmont

The value of 1880s inner-city, terraces houses has never been fully appreciated in regional locations. They were always built within walking distance to the regional cities’ CBDs and train stations for ease of access to all goods and services. The double-brick facades are ideal for keeping houses cool in summer and maintaining warmth in winter. They are ideal for entertaining, and the land sizes are large enough for fruit and vegetable gardens.

In Melbourne’s inner suburbs, it is not possible to purchase a three-bedroom brick terrace for less than $2million and yet in regional cities such as Bendigo, with public infrastructure projects and private commercial growth, it is possible to purchase one for $800,000. It is surprising more people do not recognise this value.
Allison Glanville, Bendigo

Why we must call it out

Unlike China’s citizens, Australians enjoy a democratic freedom to air their opinions about human rights abuses without fear of being incarcerated and re-educated to toe the government line.
Sure, call out our human rights abuses, including the treatment of asylum seekers. However, the scale of the human rights abuses on Chinese citizens who do not agree with their government, or are ethnically different, requires our government to call this out.
Paul Miller, Box Hill South

Tough guy Scott Morrison boycotts the Winter Olympics in China and talks about the importance of human rights. So, when will he call for the release of whistleblower
Julian Assange?
Ed Veber, Malvern East

United on this issue

A great piece from David Crowe – “They’ve normalised the pork feast” (Opinion, 10/12). Pork-barrelling is alive and well because politicians – from every side of the table – truly believe the money they spend is theirs, to do with as they will. It will always be this way, until someone comes out and says – unambiguously – that we pay their salaries, so we should be shown that the money is not being wasted. Not in my lifetime.
David Jeffery, East Geelong

As a Geelong resident, I found it embarrassing that the media raised this idea of a “big ute on a pole” with the Prime Minister (The Age, 10/12) when it actually was a great opportunity to question him regarding our region’s critical social, economic and environmental needs.
Elaine Carbines, Belmont

Geelong’s “big ute”, a gravestone for Australia’s car industry with a stamp of approval from the people who shut down that industry.
Tim Durbridge, Brunswick

Too easy to stereotype

Your correspondent (Letters, 9/12) “wonders how many of the ‘freedom’ protesters will read Thanush Selvarasa’s heartbreaking account of being held in detention by the Australian government (Opinion, 8/12)“. Perhaps they likely do think about others less privileged than themselves.
My dander was up on a V/Line train after the last protests in Melbourne. However, I found it refreshing to have my own assumptions checked when I overheard a protester discussing the plight of refugees.

There is a complexity at play here that is erased when we assume “they” must be either privileged, low IQ, fascist or selfish. Having said that, one thing does seem clear. People do not like being ordered around, especially if it goes against their ideology. A point, you would think, our politicians would instinctively understand.
Geoffrey Binder, Black Hill

Early in Australia’s innings in the Ashes Test on Thursday, the television commentator used the term “batsmen” rather than “batters”. I was half expecting viewers to be given the telephone number for Lifeline, but then remembered I was not listening to ABC radio. Anyway, I hope no one was too traumatised.
Johnny Hackett, Wonthaggi

I hope Tim Wilson and Josh Frydenberg do not take the Liberal voter for granted ever again after they have trashed the Menzies legacy of a party that values decency and integrity.

I anticipate them spending a lot of time in their electorates. They are in for a surprise and a backlash by some of their constituents who have had enough. Sir Robert Menzies is turning in his grave, along with frustrated voters, and I wholeheartedly welcome the independent candidates.
Melina Smith, Brighton

Our language fails us. What is the word to describe our predicament when our leaders speak of action on climate change yet proceed to open vast new basins of methane gas that will release catastrophic emissions? Hypocrisy, delusion, cognitive dissonance, double think?
Gillian Upton, Balaclava

Re the pronunciation of omicron (Letters 10/12). When I learnt Attic Greek (the Greek spoken and written by the ancient Athenians) in the late 1960s, we were taught to pronounce it as om-i-kron with the accent on the first syllable and a very short “i”.

If the answer to delays in answering triple-zero calls turns out to be not enough staff, who is going to pay more tax to cover the cost of employing more call-takers? Or will people keep voting for whoever promises more tax cuts?
Margaret Callinan, Hawthorn

Probably, it will be …

Will the departure of ALP parliamentarians (The Age, 10/12) and the selection of replacements offer up forward thinking and innovative candidates or just the traditional party/union apparatchiks?
Jim McLeod, Sale

… just more of the same

Responding to the report on border lockdowns by Victorian Ombudsman Deborah Glass – “Mother demands a lockout apology” (The Age, 8/12) – Science Officer Spock of the USS Enterprise may have replied: “The needs of the many outweigh the needs of the few.“
Sean Geary, Southbank

The world should clean up the giant island of plastic in the Pacific before China builds a military base on it.
Greg Hardy, Upper Ferntree Gully

A fine decision by Supreme Court judge Elizabeth Hollingworth (10/12). As Nietzsche observed, “That which is done out of love always takes place beyond good and evil”.
Michael Aughterson, Hawthorn East

Anti-vaxxers beware. By the time the ambulance arrives, it could well be too late.
Paul Murchison, Kingsbury

Morrison figures his government can gift and graft at Christmas and be forgiven by Easter.
Suzanne Miles, Frankston South

Is Christiansen setting himself up to run in the election as part of the “Disunited Australia Party”?Rod Eldridge, Derrinallum

Re our boycott of the Olympics. Fools rush in where angels fear to tread.
Glenise Michaelson, Montmorency

Presumably the rabbits outside Parliament House escaped from inside.
Reg Murray, Glen Iris

If Joyce resents 10 days in hotel quarantine, he might spare a thought for refugees held indefinitely by his government.
Annie Wilson, Inverloch

The cricket has made me hoarse. We are winning.
Graeme Lee, Fitzroy

Gay Alcorn sends an exclusive newsletter to subscribers each week. Sign up to receive her Note from the Editor.