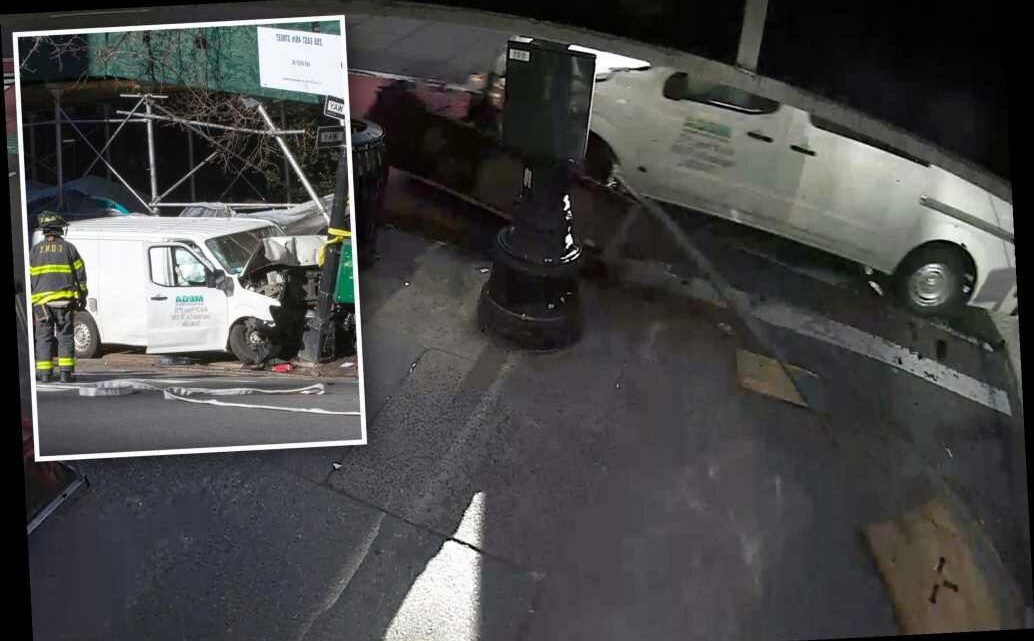 This is the heart-stopping moment a pedestrian is nearly wiped out in a two-car crash in Manhattan Friday morning that sent debris flying everywhere and left seven people injured.

Dramatic surveillance video shows Eloy Quispe — dressed in an orange hoodie and mask — narrowly avoiding being struck by a table as it hurtles across the intersection at East 50th Street and Second Avenue.

“I was standing right there on the corner there,” Quispe, 53, told The Post, pointing to the coffee shop Blank Slate.

“As soon I turn my head, I heard a huge sound and saw a piece of metal coming at me and stopped right here,” he added, motioning a foot from his legs, “and then I just heard like a big explosion — boom! — and that’s when he hit the black car and sent it spinning and spinning.”

Police said an out-of-control white van — bearing the name of a Long Island City-based company Mega Elevator Parts — smashed into the back of a black sedan on Second Avenue, sending the car barreling through Crave Fishbar’s outdoor dining setup.

The surveillance video from Blank Slate shows a table and what looks like a glass partition flying toward Quispe — and a pair of diners inside a glass enclosure at the coffee shop — just before he steps out of the frame.

The van came to a halt only after crashing into a fruit stand on 49th Street and Second Avenue, Quispe recalled.

Quispe, who was waiting for his brother Juan Carlos Quispe at the time, was not injured in the wreck just after 8:30 a.m. — but was nonetheless shaken up.

“That black car saved my life,” he said. “If it wasn’t there, that van would have just killed me and everyone sitting outside eating [at Blank Slate].”

The lucky bystander said a woman got out of the black car “screaming” and the driver also climbing out while “holding his neck.”

“There was a group of four or five kids there, maybe on their way to school, that he hit,” Quispe recalled.

The children were struck by the flying debris and suffered abrasions, while one adult broke a hip.